Bio-drama directed by Jon S. Baird which centers on Laurel and Hardy (Steve Coogan and John C. Reilly), the world’s favorite comedy double act. Stan & Ollie follows what would become the pair’s triumphant farewell tour. With their golden era long behind them, the pair embark on a variety hall tour of Britain and Ireland. Despite the pressures of a hectic schedule, and with the support of their wives Lucille (Shirley Henderson) and Ida (Nina Arianda), a formidable double act in their own right, the pair’s love of performing, as well as for each other, endures as they secure their place in the hearts of their adoring public.

Hal Roach: What are you looking for, Stan?
Stan Laurel: I’m looking for a fair price for a Laurel and Hardy picture, and you know it. Our pictures sell all around the world and we haven’t got a dime.
Hal Roach: That’s because you keep getting divorced!
Stan Laurel: No, it’s because you’re a cheapskate who got rich off our backs.
Oliver Hardy: Come on now, Stan.
Stan Laurel: He is. He’s a cheapskate, a skinflint, and a parvenu.
Oliver Hardy: A parvenu?
Stan Laurel: He thinks, because my contract is up and yours isn’t, that I won’t be able to go anyplace else and I have to take what he’s offering.
Hal Roach: Wait, wait, wait, wait. What’s a parvenu?
Stan Laurel: Well, it’s someone who started out with nothing, got rich, but has no class. Look it up in the dictionary, Hal, there’s a picture of you.
Hal Roach: Oh, you think you’re some sort of smarta**, huh? Well, guess what? I’m smarter.
Stan Laurel: Has he told you yet, we’re setting up on our own.
Oliver Hardy: Hal, it might be best if you could see your way to a small raise.
Hal Roach: You’re setting up on your own, huh? Well, how about this? Babe’s still under contract with me, and I ain’t releasing him.
Stan Laurel: You can’t have Hardy without Laurel.
Hal Roach: Well, that’s what you think.

Stan Laurel: We’re delighted you’ve taken the trouble to come and greet us, Mr. Delfont.
Bernard Delfont: Please, call me Bernie. I want to do everything I possibly can to make sure that this tour gets off on the right foot.

Oliver Hardy: [referring to Bernie] Stan, he does know we’re making a movie, right, that we’re doing this tour while we’re waiting for things to come together?
Stan Laurel: Yeah, it’s all been spelled out. You know, all been agreed up front, a hundred and ten percent.
Oliver Hardy: Good.

Stan Laurel: [backstage after a performance] How’s your knee?
Oliver Hardy: It hurts.

Stan Laurel: [referring to their stage audience] Pretty empty last night.
Oliver Hardy: Pretty empty? Could have invited the entire audience back to our hotel, and there would have been plenty of room.

Oliver Hardy: What time is it now?
Stan Laurel: [referring to the suitcase in his hand] Hold this.
[as Stan goes to look at his watch, he lets go of the heavy trunk they just carried up the stairs, they watch it as it slides down the stairs]
Oliver Hardy: Do we really need that trunk?

Bernard Delfont: How do you feel about the size of the audiences?
Oliver Hardy: To be honest, I’ve been a little disappointed. And I think it’s because of all these small theaters we’ve been playing.
Bernard Delfont: Yes, and I am absolutely furious about that.
Oliver Hardy: All due respect, Bernard, you picked them. Now, I don’t know what happened with the larger theaters we were talking about…
Bernard Delfont: Well, they said they were all booked up.
Stan Laurel: Yeah, by Norman Wisdom.

Bernard Delfont: [to Stan and Oliver] That was pure magic. It was brilliant.

Oliver Hardy: [as they pass the London Bridge] Well, here we are.
Stan Laurel: There it is, the Eiffel Tower.
[Hardy laughs]

Lucille Hardy: Has he been pushing you a little too hard, Babe?
Oliver Hardy: No. I mean, it is a bit more difficult than I thought it might be, but the show must go on.

Ida Kitaeva Laurel: He should say thank you to you for all you do for him. You could have long time ago said, “Goodbye, Oliver.”
Stan Laurel: That’s all in the past, and it’s where it should stay.

Bernard Delfont: [referring to Lucille and Ida] Two double acts for the price of one.

Oliver Hardy: What was that Ida just said about the elephant film? You’re not still carrying that around, are you?
Stan Laurel: No, it was just, you know, I like to let off steam now and again, but she’s, she didn’t know what she was saying.

Oliver Hardy: You think this is all my fault because I went ahead and did a picture with someone else sixteen years ago? Is that what you think? You weren’t there anymore. You left the studio.
Stan Laurel: I was fired.
Oliver Hardy: Because you were a pain in the a**, Stan. You refused to negotiate with Hal. I was still under contract, so I had to do that picture without you.
Stan Laurel: Well, that’s not how I see it.
Oliver Hardy: And how do you see it, Stan?
Stan Laurel: Well, if we’re laying all our cards on the table, the only reason we’re in this situation now is because when I was trying to get a better deal from Hal, you were nowhere to be seen.
Oliver Hardy: I had no choice, and you know it. I was broke.
Stan Laurel: You had a choice. You chose to be down at the country club or the racetrack.
Oliver Hardy: We had a good thing going with Hal, but you had this big chip on your shoulder because you weren’t being treated like Chaplin.
Stan Laurel: You’re damn right. And you didn’t have the guts to ask for the deal that we deserved.

Stan Laurel: I couldn’t sleep for days when they told me what you did.
Oliver Hardy: And I couldn’t sleep when I did it.
Stan Laurel: But you still did it. You betrayed me, betrayed our friendship.
Oliver Hardy: Friendship? We’re friends because Hal Roach put us together, and the only reason we stayed together was because the audience wanted it. I have real friends. And yes, we play golf, and we go to ball games, and we have sauerkraut on our bratwurst.
Stan Laurel: People will remember our movies long after you’ve finished your hot dog.

Stan Laurel: You know something, you’re just a lazy a** who got lucky because you met me.
Oliver Hardy: Lucky? To spend my life with a hollow man who hides behind his typewriter? You’re not real, Stan. You’re hollow. You’re empty.
Stan Laurel: I loved us.
Oliver Hardy: You loved Laurel and Hardy, but you never loved me.
Stan Laurel: So what?
[Oliver throws his hat at Stan, as he turns to walk away Stan throws a bread roll at the back of Oliver’s head]

Lucille Hardy: Oliver, I would go to the ends of the earth for you, I would do anything for you, but I won’t stand by and watch this lifestyle of yours put you in a wooden box. There, I’ve said it. I’m sorry, but it’s true.
Oliver Hardy: You know what? You’re absolutely right. Just as soon as we’re finished up here, that’s it. I’m through with him. Once and for all.

Stan Laurel: I should never have had us take this tour.
Oliver Hardy: Well, je ne regrette rien. And you shouldn’t regrette rien either.

Stan Laurel: Can’t you just rest until you’re better, and then, you know, we could start again?
Oliver Hardy: They say my heart won’t take it. So I’m going home just as soon as we can arrange the crossing.
Stan Laurel: You’re retiring.
Oliver Hardy: Yes. Retiring.

Doctor: [to Oliver] You cannot possibly go onstage again in your current condition.

Oliver Hardy: [Hardy shows up at Laurel’s hotel room] You’re not leaving, are you, Stan? We’ve got some shows to do.

Oliver Hardy: It was fun while it lasted, wasn’t it, Stan?
[Stan nods]

Oliver Hardy: I’ll miss us when we’re gone.
Stan Laurel: So will you.

Oliver Hardy: [to the audience] We’ve certainly enjoyed ourselves, haven’t we, Stanley?
Stan Laurel: We certainly have.

Oliver Hardy: [to the audience] Well, we’d like to finish now with a little dance. Maestro, if you would be so kind. Stanley.
Stan Laurel: [as they turn] Are you sure?
Oliver Hardy: Yes, I’m sure. I can do it. 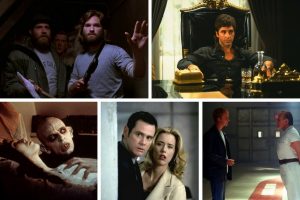