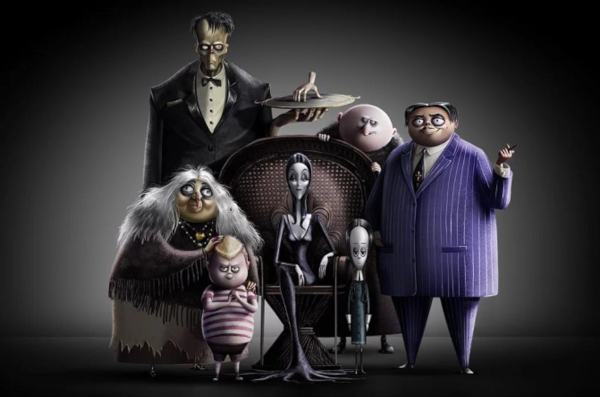 Animated comedy directed by Conrad Vernon and Greg Tiernan, based on The Addams Family comics by Charles Addams. The story follows The Addams family, whose lives begin to unravel when they face-off against a greedy crafty reality-TV host while also preparing for their extended family to arrive for a major celebration.

Morticia (Charlize Theron) is devoted to her husband and children and holds her clan together. Gomez (Oscar Isaac) is passionately in love with his wife and is enthusiastic about whatever dreadful scheme he’s cooked up. Wednesday (Chloë Grace Moretz) is a brilliant teenager with deadpan wit. Pugsley (Finn Wolfhard), is a menacing 10-year-old on over-drive, getting into any kind of dreadful mischief he can find. Mad Uncle Fester (Nick Kroll) is good-natured and likes to create mayhem any way he can. Grandmama (Bette Midler) is smitten with her grandchildren. Margaux Needler (Allison Janney), the reality TV makeover queen, is consumed with a desire for absolute suburban, pastel perfection.

[as they arrive in a clean looking suburb]
Wednesday Addams: It’s all so different.

[as she opens the window to a black sky with thunder and lightning]
Morticia Addams: What a lovely morning!

[to Mortecia, who is tightening his head inside some sort of torture device]
Gomez Addams: Darling, is that really as tight as you can make it?

Gomez Addams: Pugsley, blow F6. Fire in the hole!
[the side of the house explodes, Uncle Fester falls through the ceiling in his bathtub]
Pugsley Addams: Yes!
Uncle Fester: You sunk my battleship!
Gomez Addams: Well done, Pugsley.

Wednesday Addams: I wish something would liven this already tedious day.
[the tree branch that Pugsley is hanging upside down on throws him aside]
Wednesday Addams: Thanks for trying, Ichabod.

[referring to the Addams family]
Margaux Needler: These people are monsters! They’ll ruin the neighborhood.

Gomez Addams: These dungs are all the same. Let’s show them what it means to be an Addams.

[referring to the frog they have to dissect in their biology class]
Parker Needler: Yuk!
Wednesday Addams: I’ve done this thousands of times.

[as Wednesday tries to bring their frog back to life using electricity, like Frankenstein]
Wednesday Addams: Give my creature life! Live! I tell you, live!
[as their frog gets electrocuted back to life, the the other frogs also come to life, wreaking havoc in the class]
Parker Needler: Totally awesome.

[after Cousin Itt arrives in a swanky vehicle]
Gomez Addams: Cousin, you made it!

What do you think of The Addams quotes? Let us know what you think in the comments below as we’d love to know.