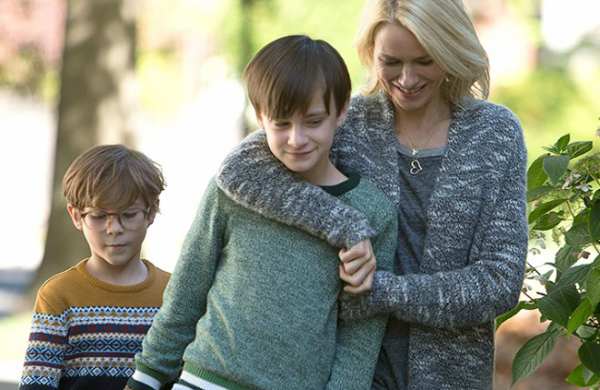 Henry has a crush on their neighbor Christina (Maddie Ziegler), the stepdaughter of the Police Commissioner, Glenn Sickleman (Dean Norris). To protect Christina from harm at the hands of her stepfather, Henry comes up with a plan to rescue her that he writes down in a book. Henry’s mother discovers the book and decides that she and Peter will put Henry’s scheme into motion, and in the process discovers new strength as a parent.

Henry Carpenter: [voice over] This story is about me, my brother, my mom, and the girl who lived next door.

[giving a speech to his classmates]
Henry Carpenter: Our legacy isn’t what we write on our resume or how many commas we have in our bank account. It’s who we’re lucky enough to have in our lives and what we can leave them with. The one thing we do know, we’re here now. So I say we do the best we can, and that’s what I think about my legacy.

Mrs. Evans: Henry, remind me again why we can’t put you in a gifted school?
Henry Carpenter: Because it’s better for my psycho social development for me to interact with the peer at a normal school environment.
Mrs. Evans: Oh, yeah. Okay.


John: Late again.
Susan Carpenter: Dog ate my car.
John: Table seven says their eggs are too wet, so have fun with that.
Sheila: Hey, toots, how’s tricks?
Susan Carpenter: Oh, the feds are all over me. I had to move money into my Swiss bank account, and the rates are terrible.
Sheila: Tell me about it. When I won the lottery, you should have seen the taxes. Eighty-two million turned into sixteen million. What am I going to buy with that?
John: Hey, table seven is real.
Susan Carpenter: Sell the castle yet?
Sheila: Of course I could, but I’m having a hard time unloading Monte Carlo.
[she turns around and sees a male diner patron staring at her chest]
Sheila: My boobs are up here.

John: Hey, Susan, I guess I can just set you up with a direct deposit if that’s easier.
Susan Carpenter: I don’t know, I’ll have to ask Henry.
John: You have to ask your eleven year-old?

Henry Carpenter: Did our financial statement come in the mail today?
Susan Carpenter: Yeah, I forgot to give it to you.

Sheila: I don’t know how you do it, all by yourself.
Susan Carpenter: Come on, I have Henry! Find me another male of the species who’s more grownup than him.
Sheila: I’d like to.

Henry Carpenter: Mom, I have to tell you something and it’s very important. Christina’s in trouble.

Henry Carpenter: [voice over] When someone hurts someone else we have to make it better. There’s only one way to stop it. I’d hope to do it all myself, but that’s not an option.

Principal Wilder: [to Susan] Mr. Sickleman is the Police Commissioner, I’m not going to subject him to public scrutiny without conclusive evidence.

Susan Carpenter: Okay, let’s do this.

Henry Carpenter: [voice over] Mom, everything you need is right here. I’ll be with you the whole time.

Susan Carpenter: I know what you’ve done. Henry documented all of it.
Glenn Sickleman: Who do you think they’re going to believe?

Henry Carpenter: [voice over] It can’t be left undone.

Henry Carpenter: [voice over] We have to make it better.