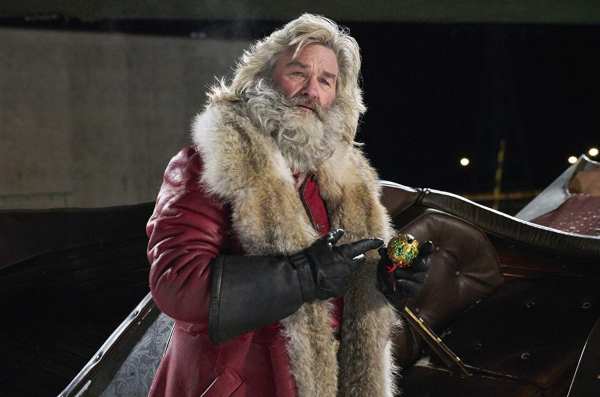 For several days now, Netflix tried to convince me to see The Christmas Chronicles (2018). What got me watching it finally was their reference to the makers of Harry Potter, so I thought I might as well give it a try. What already got my attention, in the beginning, was that it seems Netflix now tries to cast more popular movie stars for its films, here Kurt Russell, probably in order to account for the movies’ quality and to push its review. That, however, was it with the movie’s entering into stardom, since one famous actor cannot account for all the other deficiencies prevalent here. Throughout the film, it seems as if the movie tried to break with the old conventional Christmas stories and bring in fresh air, thus not presenting how, for example, the parents came to be “true Santa believers.”

This leads to many unsolved ends, leaving the viewer to make up for them by having a knowledge of many other Christmas movies on which this one here in part builds upon. Trying to modernize the whole Christmas-theme, for example by a Santa criticizing traditional views on him, the movie challenges the idea of stereotypical representations. Also, the society’s growing demand to document everything to get “many hits” in the internet, as Kate Pierce says to her brother, is partly satirized by the film, even more by the audiences annoyed response to the many scenes where action and speed would have been demanded, and the little girl being preoccupied with recording everything. But in the same way as the movie does not provide a full change to conventional Christmas stories as well as it does not provide a full satire, it also touches many different topics, all just a little bit, leaving the question open what the movie really wanted to say or bring across or just which direction the film is going.

Many slapstick moments are just to enjoy in isolation, like snapshots that do not contribute in any way to the story, one could even go so far as to say that they harm the main plot. Santa’s singing-scene, for example, sure is entertaining and well made; but the way how easily this is enabled and built up is just ridiculous. One starts to question the logic of the movie, where he gets all these presents if the hat was what gave him magical powers. In the end, he gives this hat to Teddy, explaining he does not need a magical hat, being Santa. This would explain all the logic errors and loose ends from before, does it seem, however, that it is just that, an explanation to justify it rather than a justified explanation.

Why did he even give the boy the hat? To seal his conversion into a believer? Only makes sense at the end – does not seem justified. Why did he pretend to be unmagical? To bring this tragic pair of endlessly fighting siblings together – does not seem solid either. Why would he just ask for his little helpers in the end when time became even tighter if it was already stressful before? To make Teddy believe in himself – again only makes sense in the end. And the problem here is not that it only makes sense in hindsight and with the knowledge of the resolution, in the end, it does simply not seem like it had been clear to the filmmakers themselves. All these scenes seem to be merely a tool for dramatic action, an action that rather stands powerful in disconnected scenes than an overall plot.

And presuming Santa did all that just to help two siblings, of course, he is Santa, he is a helper and healer that brings together the disunited, the consequences he simply accepts for that are not Santa-like at all: the heightened crime rates, due to a reduced “Christmas spirit”, for example. Altogether this Santa seems more like a selfish one, preoccupied with his reputation rather than what he should represent, the “Christmas spirit.” Maybe this was an attempt to humanize the figure of Santa Clause, to make him more accessible by bringing him down from his ungraspable Saint-like position and make him “one of us.” This, however, is not well-executed, manly again to the fact that it is executed only in part. What gave, even more, to think about, was the naturality with which Santa addressed the adults throughout the movie, naïve and ignorant towards the fact that he lives as a common myth. Being as long in that job as he seems to be, this does not make any sense since his behaviour is one of somebody who has no clue with what he is dealing. Here again the question – why do Kate and Teddy’s parents believe in Santa? And why did the family did not come across as especially believing?

Again, many older Christmas movies resonate with open ends of the plot, and just like another Netflix movie released this year, Sierra Burgess Is a Loser (2018), the film lives more on momentary scenes and otherwise in the imagination of the viewer, than really on the screen as a well-developed story. The story just seems to be a means to funny, entertaining and impressive scenes, as if to show off what the filmmakers are capable of doing, rather than the scenes being a means to a solid plot. Maybe this is because Netflix tries to provide more and more Original-content in a more and more limited period of time. Because a non-solid, not well-planned plot is usually the result of little thought and time given.

It seems as if Netflix just wanted to have made a Christmas movie itself than making a good one for the movie’s sake. I sure was entertained watching the movie, wanting to know how the well-predictable story will resolve, but I would have preferred to be entertained by something qualitative that lets me dive in into the fictive world presented, rather than meta-fictionally observing how the figures and scenes are moving like on a chess-board to serve the dramatic action and, thus, the entertainment of the audience.