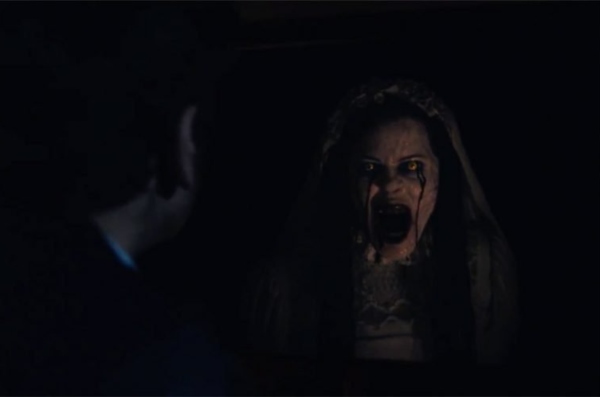 Supernatural horror directed by Michael Chaves and produced by James Wan. The story is set in 1973 LA and follows social worker Anna Garcia (Linda Cardellini), who as she begins diving in to one of her cases finds foul play at the hands of a supernatural force, which she finds has similarities to the force terrorizing her family. Their only hope to survive La Llorona’s deadly wrath may be a disillusioned ex-priest, Rafael Olvera (Raymond Cruz), and the mysticism he practices to keep evil at bay, on the fringes where fear and faith collide.

Anna Tate-Garcia: [to Chris] Stay in the car, okay? And please don’t wake up your sister. I’ll be back in a few minutes.

[banging on the car door trying to get away from La Llorona]
Chris: Sam! Sam, let me in! Open the door! Open!
Samantha: What?
Chris: Open!
[Sam opens the car door, he then sees La Llorona peering in through the window and screams]
Samantha: What’s going on?
Chris: Didn’t you see her?
Samantha: Who?
[Chris looks around, but La Llorona is not showing herself, then the car window starts winding down by itself]
Chris: No!
[Chris winds the window up and looks around in fear]
Samantha: Chris, what’s going on? Chris?

[referring to La Llorona]
Father Perez: She was known for her beauty. The most beautiful woman in that part of México. Then one day, a rich and handsome ranchero rode into her village. She set her sights on him. The marriage was splendid. They had two beautiful children whom they treasured. But then, after a time, she discovered him in the arms of a younger woman.
Anna Tate-Garcia: What did she do?
Father Perez: She took from him what was most priceless. She murdered their children. In a fit of jealous rage, she drowned them in the river. After she realized what she had done, she was consumed by guilt. She threw herself into those same waters, and is cursed to roam the earth, searching for children to take their place.

[Anna notices the burns on Patricia’s arm]
Anna Tate-Garcia: What happened to your arm? What happened to you, Patricia?
Patricia Alvarez: La Llorona. Your children, have they heard her crying? Have they felt the sting of her tears? They will. Soon. And she will come for them. You know why? Because I told her to.
Anna Tate-Garcia: No, Patricia, it’s…
Patricia Alvarez: You know when my boys died, I didn’t pray to God for their salvation. Instead, I prayed to her. I prayed! And I prayed! And I prayed to her to give my children back to me and take yours instead!

Rafael Olvera: [to La Llorona] Behold the cross of the Lord, and be gone, wicked spirit!

[last lines]
Anna Tate-Garcia: Thank you. I don’t know how I could ever repay you.
[Sam and Chris embrace Rafael]
Rafael Olvera: You two were very brave. Even I was scared for a while.
Samantha: Really?
Rafael Olvera: No. Not really.
[he gets into is cab, and waves goodbye as it drives off]
Samantha: [to Chris] Race you inside.
[as Sam and Chris run back into the house, Anna sees a puddle of water on the sidewalk, looking like a puddle of tears]


What do you think of The Curse of La Llorona quotes? Let us know what you think in the comments below as we’d love to know.