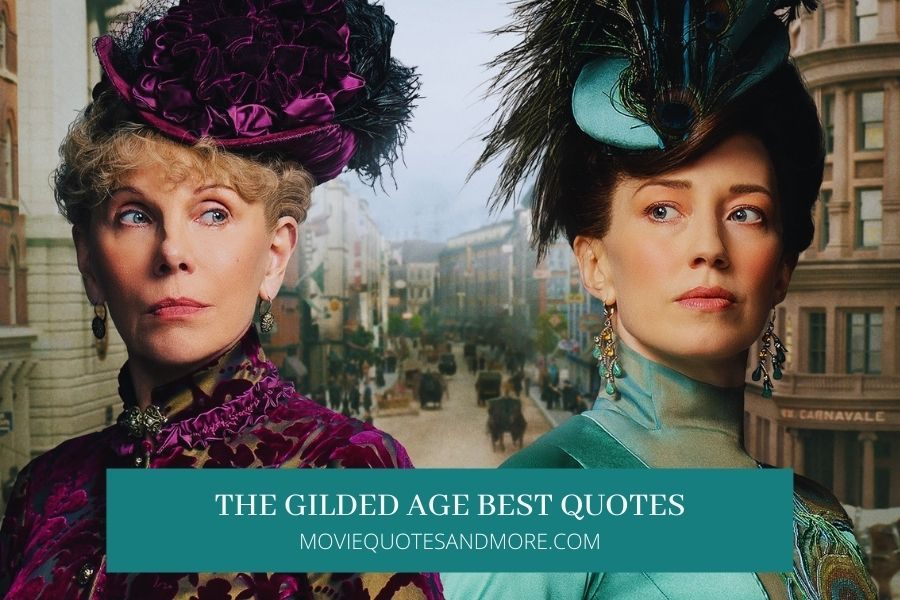 Our list of the best quotes from HBO’s historical drama series created by Julian Fellowes. The Gilded Age is set in the United States during the boom years of 1880s New York City and begins with young Marian Brook (Louisa Jacobson) moving from rural Pennsylvania to New York City after the death of her father to live with her rich aunts Agnes van Rhijn (Christine Baranski) and Ada Brook (Cynthia Nixon). Accompanied by Peggy Scott (Denée Benton), an aspiring writer seeking a fresh start, Marian inadvertently becomes enmeshed in a social war between Agnes, a scion of the old money set, and her new money rich neighbors, a railroad tycoon and his ambitious wife, George (Morgan Spector) and Bertha Russell (Carrie Coon).

Agnes Van Rhijn: We have invited Marian to live with us. She hasn’t a penny.

Agnes Van Rhijn: [to Marian] I need to make one thing clear. Power belongs to old New York, my dear. Not the new. Never the new. New York is a collection of villages. The old have been in charge since before the revolution. Until the new people invade it.
Ada Brook: It’s not quite as simple as that.
Agnes Van Rhijn: Yes, it is.

Marian Brook: Well, I’m new. I’ve only just arrived.
Agnes Van Rhijn: You are my niece and you belong to old New York.

Peggy Scott: Well, how do you find your aunts?
Marian Brook: Ada is kind, but not clever. And Agnes is clever, but not kind.

Anne Morris: I’m afraid New York can be quite challenging at first.
Bertha Russell: We haven’t found it so, have we, George?
George Russell: There is no challenge you are not equal to, my dear.

Agnes Van Rhijn: You must meet the right people in the right way.

Sylvia Chamberlain: I don’t understand why they have taken you in.
Peggy Scott: I have a job and the fresh start that I need.

Marian Brook: I want to do something with my life.

Peggy Scott: For a New Yorker, anything is possible.

Mrs. Bauer: I hope you’re not against Miss Scott.

Agnes Van Rhijn: Why don’t we just go outside and roll in the gutter? It will save time.

Turner: The mistress is not a player in the great game.

Agnes Van Rhijn: That woman is unsuitable as an acquaintance.