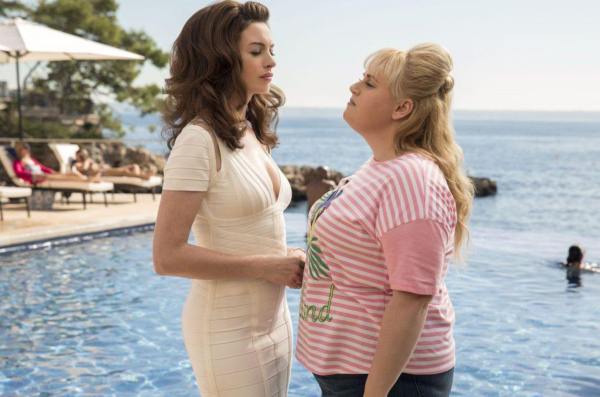 Comedy remake of Dirty Rotten Scoundrels directed by Chris Addison. The story follows two female scam artists (Anne Hathaway and Rebel Wilson), one low rent and the other high class, who team up to take down the dirty rotten men who have wronged them.

[to the two cops chasing after Penny]
Jason: You let her get away!
Policewoman: Well, at least we didn’t give her five hundred dollars first. Idiot.
[as they leave, we see Penny, dressed in a black dress, get up from where she was hiding with the black garbage bags in the alleyway]
Penny Rust: Trashy dress, you did it again.

[to a rich looking man on the diner of a train]
Penny Rust: Is this seat taken?
[takes the seat opposite the man]
Penny Rust: I’m starving. I could murder a triple cheeseburger right now. Or…
[takes a look at the menu]
Penny Rust: I’ll just get a glass of water, please.
Waiter: Is that all, madam?
Penny Rust: Yeah, that’s it. I’ll just help myself to the sugar packets. They’re free, right?
Waiter: Yes.
[she opens and one sugar packet and empty the contents into her mouth]
Penny Rust: Mm. That’ll fill me up.

Josephine Chesterfield: [to Penny] Try to be as inconspicuous as possible. I know it’s difficult for you, but it’s better to go unnoticed by Gregor’s henchmen.

Penny Rust: But what you’re not getting is that a girl like me could make it real uncomfortable for you in this town. Like a bad case of the herp.
Josephine Chesterfield: With the right vitamin cocktail, you’ll go away.
Penny Rust: You do know herpes never goes away, don’t you?
Josephine Chesterfield: Doesn’t it?
Penny Rust: No. Seems like you’ve set up such deep roots here. It’d be such a shame for it to all be seized by Interpol. It’d just take one phone call.
[imitates making a call]
Penny Rust: Hello, Interpol?

Penny Rust: Why all the theatrics? You’re hot. That’s enough.
Josephine Chesterfield: It is not enough. Hot is not a career. Hot will get you gifts and trinkets, but you must pay for them in other ways. Sex, Penny.

Josephine Chesterfield: [to Penny] Finally, you must be trained for any situation.

Josephine Chesterfield: Penny, if you want to be like me, then you’re going to have…
Penny Rust: I don’t want to be like you! Why would I want to be like you? I don’t want to be some loser that looks like a colorful Beetlejuice. Oh. Oh, sorry, Julie Andrews just called. She said she wants her voice back. We all know you’re actually from Wisconsin, and you stay in this house eating weird salads, and drinking alcohol that doesn’t get you hammered fast enough. And you’re like, “Oh, I better check all my precious stocks on the NASCAR index.” And, “Oh, wait, let me just collect another little boy’s head, or another dinosaur clitoris, or another little statue of a…”
[she yells as the blue panther chameleon moves]
Penny Rust: That’s alive.
Josephine Chesterfield: Yes, that is a Madagascan blue panther chameleon. It’s one of the last of its kind.
Penny Rust: [sarcastically] Is it? Just like you.

[referring to Josephine running after Thomas’s plane as it takes off]
Penny Rust: Aw, the plane didn’t stop for the crazy lady. Here she comes. Walk of shame. Walk of shame. Walk of shame.
Josephine Chesterfield: Last night I went to his room, and, yes, I tried to seduce him. And I thought I was getting somewhere too, because he turned out the lights, but it was only to show me a PowerPoint presentation all about his new app. Once he had finished his pitch, I assumed we’d go to bed. Then he said he’s bit of a germophobe, so would I mind taking a shower, and I was insulted, but I complied for the sake of the bet. And when I emerged, he was gone, my clothes were gone, my jewelry, my phone, my laptop, even my limited edition Jimmy Choos!
Penny Rust: [laughing] Come off it. You expect me to believe that that kind guy tried to jack your Jimmy Choos when he just returned to me five hundred thousand dollars that I tried to give him?
Josephine Chesterfield: Why did you give him five hundred thousand dollars?
Penny Rust: Because that’s the amount you stole from him.
Josephine Chesterfield: No! That is what I’m saying, tits for brains! I didn’t steal from him. I invested in his app!
Penny Rust: How much?
Josephine Chesterfield: Five hundred thousand dollars.

Thomas Westerburg: This year I made six million dollars, so far.
Josephine Chesterfield: Impressive. How irritating.
Thomas Westerburg: But together, we could make so much more. So much more. You guys are fantastic at what you do. My nana would absolutely love you. The three of us, that’d be one hell of a team.
[Penny slaps him]
Penny Rust: You played me.
Thomas Westerburg: Penny, the only thing I never lied about was you.
[Penny kisses him]

Thomas Westerburg: Listen…
Josephine Chesterfield: First million pays us back. The second million will be your apology.
Penny Rust: Yeah, and if you ever double-cross us again, I withhold sex for a whole year. Or six months. Or, no, let’s go with twenty-four hours. Or like until mid-morning, I will not be open as a shop.
Josephine Chesterfield: You done?
Penny Rust: Okay. So don’t cross us ever again.
Thomas Westerburg: Deal. So, are we doing this?


What do you think of The Hustle quotes? Let us know what you think in the comments below as we’d love to know.