The Killing of a Sacred Deer (2017) Movie Review 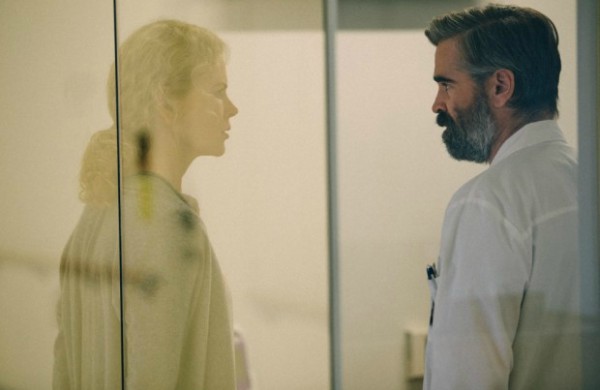 From the opening shot of The Killing of a Sacred Deer, we immediately get a sense of what we’re in for. A slow reveal of an open heart, pumping during its own surgery. It’s immediately confronting but it’s a frame that is hard to look away from – with Franz Schubert’s symphony Stabat Mater adding a sense of urgency and dread to the already alarming opener.

We then meet Stephen (Colin Farrell), a surgeon who has established a relationship with Martin (Barry Keoghan), a teen awkward in nature and stature, and who happens to be the son of one of his former patients. Martin eventually weaves his way through Stephen’s family, developing relationships with his wife Anna (Nicole Kidman) and their two children Kim (Raffey Cassidy) and Bob (Sunny Suljic).

And that is about as far as I will go in regards to plot. Because The Killing of a Sacred Deer is a piece of cinema where the little you know, the better.

It is difficult to delve deep into how and why this film works so well, while still keeping mum about major plot points. Director Yorgos Lanthimos has created a horrifying, tension-ridden psychological horror that weaves Greek mythology, biblical references, moral ambiguity and themes of masculinity and regret into more than just your standard revenge film. And it’s a piece that will lurk under your skin hours after the credits roll.

Uneasiness comes from all angles here – Lanthimos’ and Efhymis Filippou’s bizarre screenplay and equally bizarre use of dialogue, Thimios Bakatakis’ off kilter and anxiety-ridden cinematography (shades of The Shining and Mr. Robot seep through effortlessly), and of course the performances are magnificently unnerving across the board. Farrell and Kidman provide their best work in years, portraying a married couple that aren’t as picture perfect as they make out to be. Alicia Silverstone makes a surprising cameo as Martin’s mother, and provides one of the film’s best lines in terms of comedy, while also still making us feel incredibly uncomfortable in the process.

Every performance is stellar, no matter how big or small the role, but the film really belongs to Barry Keoghan. The Irish actor, who was recently seen in Christopher Nolan’s Dunkirk, has a presence so chilling that even him eating spaghetti will give you nightmares. Everything from the way he moves, to the way he smiles from a distance is drenched in horror. And the deadpan stares would challenge Ezra Miller in We Need to Talk about Kevin any day. Keoghan has delivered one of the most frightening performances I’ve seen in years, and here’s hoping the award season recognises this in the months ahead.

Lanthimos had already established himself an oddball auteur mastermind, with Dogtooth (2009) and The Lobster (2015) near cementing him into cult status territory. And The Killing of a Sacred Deer has now nailed him to it – this is easily one of the best and most disturbing films of the year (even more so than Darren Aronofsky’s mother!). If you consider yourself a bit squirm-ish when it comes to tension and discomfort, this might not be the film for you. But if you think you’re brave enough, I highly recommend it. Just don’t expect to feel rosy afterwards.

Martin: I brought you some little gifts.
Steven Murphy: That’s very kind of you.
Martin: It’s a keyring with a musical note on it for Kim because I know she likes music.

See more The Killing of a Sacred Deer Quotes

[referring to Kim and Martin]
Anna Murphy: Where did you two go?

[referring to the stick-on nodes]
Martin: If I had hair on my chest and belly, who would you attach these?
Steven Murphy: We’d shave the hair off first.
Martin: How long does it take for the hair to grow back?
Steven Murphy: I don’t know, about a month, I suppose.
Martin: Your son told me that you’ve got you lots of hair under your arms, three more times than I do, and that you’ve got a very hairy back and a very hairy belly.
Steven Murphy: I probably do have a little more hair than you because I’m older than you. But soon you’ll have more hair too. It’s all down to hormones.
Martin: Can you show me please? Can you take off your shirt and show me, please? Please.
[Steven hesitates for a moment before opening his shirt to show Martin his chest and under arm hair]
Martin: Okay, you do have more hair than I do, but not three times more. Me and my mom thought it’d be nice if you came by for dinner tonight. We could watch the rest of the movie. Does eight sound good for you?
Steven Murphy: That’s very kind of you, but I just can’t make it tonight. I need to be at home.
Martin: Can’t you get away for a couple of hours?
Steven Murphy: I can’t, no. some other time.
Martin: My mom’s going to be upset. Can I tell you a secret? Don’t tell her I told you. I think she, I think she likes you. I mean she’s attracted to you, but she says that’s not true, but it is, I’m sure. And to be honest I think you’re perfect for each other. You’d make a great couple.

Martin: [to Steven] My mom’s attracted to you. She’s got a great body.

Martin: I want to say one more thing. I’m really sorry about Bob.
Steven Murphy: It’s nothing series.
Martin: No, it is. They will all get sick and die. Bob will die, Kim will die, your wife will die. Understand?
Steven Murphy: No, I don’t.

Kim Murphy: Don’t be scared, mom. You’ll see, you won’t be able to move either, but you’ll get used to it.

Steven Murphy: Where is she? What did you do to her?

Anna Murphy: You do realize, Steven, we’re in this situation because of you.