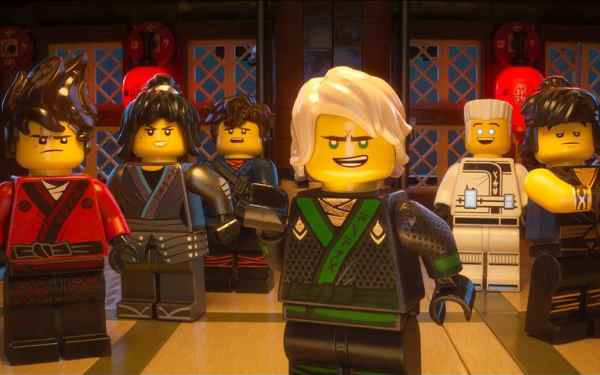 Animated action-comedy directed by Charlie Bean, the story centers on young Master Builder Lloyd (Dave Franco), aka the Green Ninja, along with his friends, who are all secret ninja warriors, led by the wise Master Wu (Jackie Chan). When Lloyd’s dad, the evil warlord Garmadon (Justin Theroux) poses a threat to Ninjago City, and wants revenge on his brother, Wu, the young ninjas are tasked with defending their island home.

Pitting mech against mech and father against son, the epic showdown will test this fierce but undisciplined team of modern-day ninjas who must learn to check their egos and pull together to unleash their inner power of Spinjitzu.

[as Garmadon attacks]
Garmadon: What’s my name?!
[spitting out his food]
Citizen Man: Garmadon!
[feeding her baby in her arms]
Citizen Mom: Garmadon!
[spits out the milk]
Baby Citizen: Garmadon!

[a wedding couple are running away as Garmadon is attacking Ninjago, the groom’s foot gets stuck]
Bride: Run!
Groom: I’m stuck.
Bride: I know you want me to save myself, so I’ll go now. I promise I’ll never forget you!
Groom: I didn’t ask you to promise that! Come back!

Lloyd: Hey, mom. Um, could we talk about dad? So when you guys got together, was dad always an evil warlord?
Koko: Okay. Well, here it is. I got swept up. He had so many plans, he was so ambitious. He said he wanted to conquer the world. I thought it was a figure of speech. But if I had never met Garmadon, I would have never had you.
[Lloyd sighs]

[walks awkwardly onto the school bus as everyone stares at him.
Lloyd: Hey.
[next shot we see Lloyd sat all alone as all the kids sitting on the other side of the bus]
School Kid: His dad ruins everything.

Sensei Wu: A true ninja knows when to fight and when to blend in the shadow.
[next shot we see the Ninjago team unsuccessfully hiding behind trees]
Sensei Wu: Unbelievable.

Garmadon: You can’t catch me Green Ninja.
Lloyd: Watch this!
[referring to Lloyd shoots down his army]
Garmadon: Where did that come from?
[he takes off his helmet]
Lloyd: Hello, dad.
Garmadon: L-Loyd?
Lloyd: That’s right! And it’s Lloyd, dad!

Garmadon: You ready for me to concur Ninjago!
Lloyd: Oh, I’ll be waiting… Dad.
Garmadon: Sorry? What was that last thing you said?
Lloyd: What?
Garmadon: That last part, I didn’t catch it.
Lloyd: Why, I, I didn’t say anything. What do you mean? I didn’t… I said, “I’ll be waiting,” and I stopped talking.
[he takes off his helmet]
Lloyd: Dad.
Garmadon: L-Loyd?
Lloyd: That’s right, your son! And it’s Lloyd.
Garmadon: No, L-L-O-Y-D. I named you.
Lloyd: No, you ruined my life.
Garmadon: Pfft, that’s not true. I haven’t even been a part of your life, how could I ruin it? I wasn’t even there.

Sensei Wu: I’ve taken a solemn oath to form the secret ninja force. Are you ready to risk your life for Ninjago?
Lloyd: Yes, I’m on it.
Nya: Yes!
[the others all mumble or say yes]
Jay: Maybe.

Nya: It’s okay, Lloyd. Nobody’s parents are perfect.
Jay: I mean my mom is weird and collects seashells. Your dad levels cities and attacks innocent people. So, they’ve all got their quirks, you know?

Nya: It’s okay, Lloyd. Nobody’s parents are perfect.
Lloyd: Yeah, but I feel like there’s more to Garmadon that I need to know.

[whilst asleep Lloyd gets a call on his phone from Garmadon]
Lloyd: Hello?
Garmadon: Who is this?
Lloyd: Lloyd Garmadon, your son.
Garmadon: Hm, I must have butt dialed you.

Sensei Wu: To understand your future you must go back to your ninja roots. Your dad was a ninja too.

Garmadon: L-Loyd, you hear that? We’ve awakened the unstoppable beast!
[we see a cat appear and meows]

Garmadon: I haven’t felt this good in a long time.
[we see Lloyd fall, then we see Garmadon trying to help Lloyd]
Garmadon: L-Loyd, are you okay?
Lloyd: Yeah, yeah! I think it’s my arm. Is it bad? Is it bad? I don’t want to look.
[we see a hole where his arm used to be; Gamadon cringes in horror]
Garmadon: Woh!
Lloyd: On a scale of one to ten, how bad is it?
Garmadon: Oh, I’d say it’s about a seven-point-arm-ripped-off!