Adventure comedy directed and co-written by Aaron and Adam Nee. The Lost City (2022) centers on reclusive romance novelist Loretta Sage (Sandra Bullock), who has spent her career writing about exotic places in her popular novels featuring handsome cover model Alan (Channing Tatum), who has dedicated his life to embodying the hero character, Dash. While on tour promoting her new book with Alan, Loretta is kidnapped by an eccentric billionaire, Fairfax (Daniel Radcliffe), who hopes that she can lead him to the ancient lost city’s treasure from her latest story. Wanting to prove that he can be a hero in real life, Alan sets off to rescue her, and the unlikely pair have to work together to survive the elements and find the ancient treasure before it’s lost forever.

Villain: You led me straight to The Lost City. Now, prepare to die.
Loretta Sage: There were just hundred of snakes in this temple just waiting for us to show up?
Alan: What? Why aren’t they biting that guy?
Loretta Sage: [we see she’s writing her novel on her computer] This is ridiculous. Delete. Delete. Delete.

Agent: Listen, Loretta, we need you to promote your new book on The Lost City. You can’t spend your life in the bathtub drinking Chardonnay with ice.

Loretta Sage: [to Alan] You do know you’re not Dash, right? Dash is a character I made up.

Fairfax: Ms. Sage, I enjoyed your book about The Lost City, and I believe you’re the one who can help me find it treasure.
Loretta Sage: I have to respectfully decline.
Fairfax: I’m afraid I must insist. 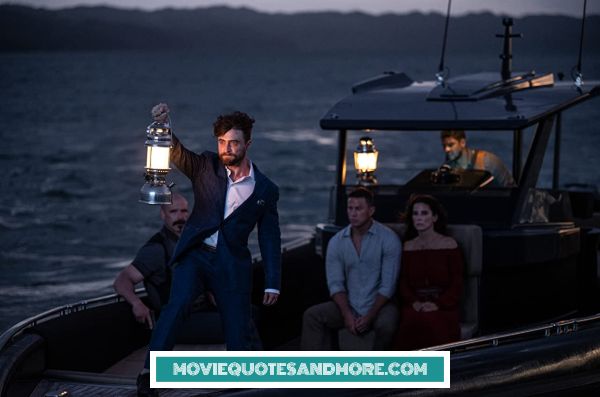 Agent: Loretta Sage is missing.
Alan: I’m going to rescue her. I just want her to think of me as more than a cover model.

Loretta Sage: Alan? What are you doing here?
Alan: We’re here to save you.

Alan: [to Loretta] This is like your book. We’re on the Lovemore and Dash adventure right now.

Alan: [as their climbing up a mountain] I’m going to help you out a little bit. Let’s go.
Loretta Sage: What are you doing? Don’t do that. Oh, God. This is not a romance novel!

Loretta Sage: I am driving.
Loretta Sage: [as she goes to open the door the car falls off the edge of the cliff] Oh. Oh. Oh.

Loretta Sage: We’re so close. I could actually find The Lost City.

Agent: If I don’t get to this island, my friend, and her cover model, are going to die.