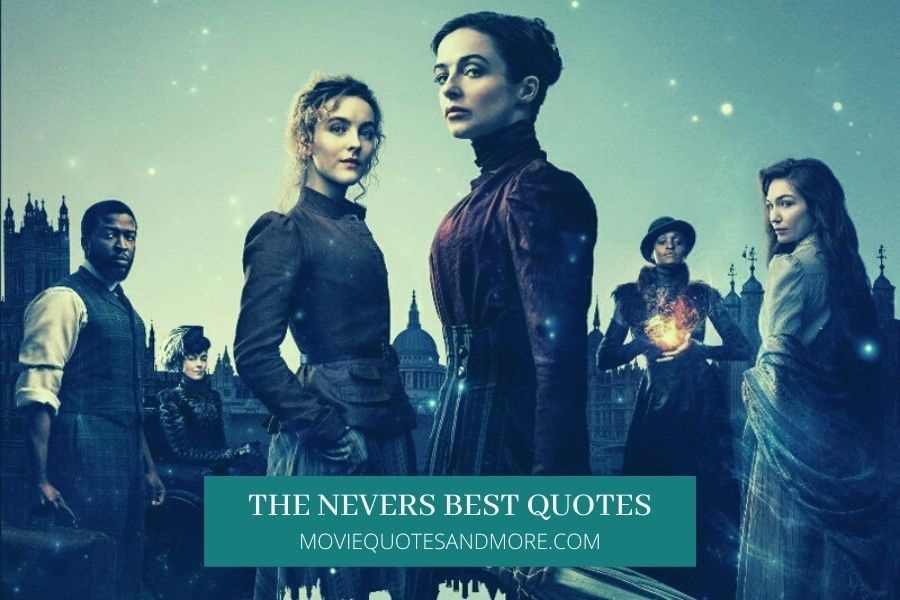 Our list of the best quotes from HBO’s sci-fi fantasy series created by Joss Whedon. Set in the last years of Victoria’s reign, The Nevers follows a gang of women in London, who suddenly manifest abnormal abilities that are referred to as the Touched. They become champions of this new underclass, making a home for the Touched, while fighting relentless enemies to make room for those whom history, as we know it, has no place. 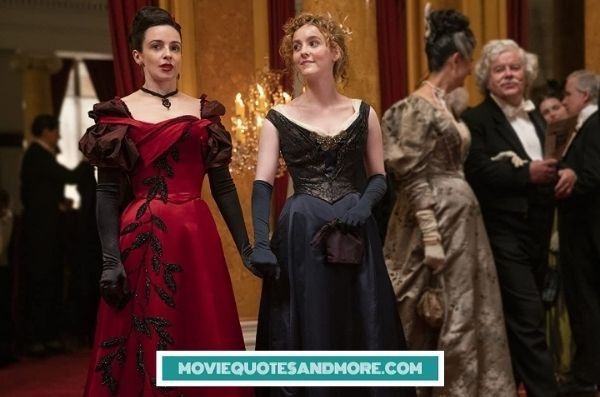 Mr. Haplisch: They’re saying Myrtle might be Touched? We heard about those girls the last few years. They’re not right.
Amalia True: Neither right nor wrong. Being Touched is not a defect of character.

Penance Adair: Yes, the reverend mentioned an affliction of the tongue.
Mrs. Haplisch: Because old Satan is squatting on it. Spewing out his foulness, making a chamber pot of our Myrtle’s mouth.
Mr. Haplisch: Well, that’s a bit descriptive.

Lord Massen: It came three years ago.
Lord Broughton: Third of August, 1896.
Lord Massen: A Monday. Rather gray. Not one case of someone being Touched before then. Not one outside London. Those reported overseas were all here at the time. And not one man of stature afflicted. That’s the genius of it. They came at us through our women.
Lord Allaven-Tyne: They? I’m still not sure I can equate a few bizarre anecdotes with the Mongol horde.
Lord Massen: Only a blind man measures the length of a blade by how much is in his belly.

Lord Massen: This was designed so that we would see the parts and not the whole. Philanthropists like Lavinia Bidlow see the suffering of the afflicted. The common throng see a macabre murderess.
Prince Albrecht: And you see a broken machine.
Lord Massen: That is exactly what I see. The greatest machine. The heart of our empire brought to a shuddering halt by the caprice and ambitions of those for whom ambition was never meant.

Lord Massen: We are the first generation accustomed to the impossible. What women are appalled by today, they will accept tomorrow, and demand the day after that. And the immigrant. And the deviant. That is the power being wielded, and not by us. The blade is in, gentlemen. We need to know whose hand is on the hilt.

Frank Mundi: So you’re going to tell me what was here before you dressed it up, because one more lie, and I’m not on a case, I’m the f***ing Angle of Death.

Penance Adair: [referring to Myrtle] She does speak English. But not with her mouth.

Lucy Best: People been attacking us since they known we was Touched.
Harriet Kaur: Or since always.
Amalia True: This is different. This whole day.
Penance Adair: We knew people would come down on us the more we were thriving.

Lucy Best: It’s about confidence. As my mum used to say, if you can look a man in the eye, you can stab him in it.
Amalia True: Smart woman.
Penance Adair: But also, don’t do that.

Hugo Swan: That’s how the club works. It’s all quite delicate. Favors and threats, and then, one shining night where no law yet exists. It’s more than just a club. It’s an ethos.

Augustus ‘Augie’ Bidlow: Sex club is just, that’s just flirting on a much scarier level.
Hugo Swan: You don’t have to flirt. You just have to relax. Endure someone flirting with you.

Hugo Swan: As far as society is concerned, Augustus Bidlow is above reproach, and beneath contempt. He’s perfect.
Housemaid: For what?

Amalia True: Gift like yours, you should be the Royal physician, not patching up gangsters and freaks.
Dr. Horatio Cousens: Gift like mine gets me branded a voodoo witch doctor. I gave up being choosy.
Amalia True: Nothing about me not being a freak?

Declan Orrun: I’m genuinely searching for a way that this spins out that I don’t kill you.
Amalia True: It would be better if you didn’t.
Declan Orrun: You’re a rare f***ing bird.

Declan Orrun: My business is mine. Apart from the sanctity of my harmonious marriage, f***-all is exclusive.

Lavinia Bidlow: Language requires not stasis, but specificity. I should be thrilled to excise the word “nice”. It’s vague as paste.

Lord Massen: It is not panicking to abhor something. Neither is it useful to replace a perfectly good Anglo-Saxon word with some foreigner’s flourish. In England, we say “the employed”. What possible benefit in replacing it with “employees”?
Amalia True: The singular. One may refer to a single employee, whereas “the employed” can only be used to describe a mass of people. It doesn’t allow for the idea that a single worker may be a whole and meaningful being.

Lord Massen: I take it then that you are yourselves among the afflicted?
Amalia True: Touched, yes. We don’t consider ourselves afflicted.
Lord Massen: Perhaps some women are more fortunate in the nature of their ailment than others.
Amalia True: That’s true, but more suffer from society’s perception than their own debilitation.

Lavinia Bidlow: Mrs. True tends to be a few steps ahead of the rest of us.
Hugo Swan: A prognosticator.
Amalia True: Nothing so grand.
Hugo Swan: So I shouldn’t ask how I’m going to die.
Lavinia Bidlow: No, but one can safely assume it will involve a French word.

Lord Massen: I’m old and I’ve seen too much change to fight against the tide, but chaos is not change. Shouting for recognition does not make a people worthy of it. There’s a harmony to our world that’s worth preserving.
Amalia True: As I understand it, a harmony is made up of different voices sounding different notes.
Lord Massen: Yes. And one is always above the other.

Maladie: Did you all come in hats? Now all of your brains are naked. No? You shall have a wreath of eels with the tail in your mouth.

Maladie: Devil’s speciality is eels. Which is known by you as a serpent. Oh, but it’s only Adam. It’s all the same when it slithers.

Frank Mundi: I’m sure this must be a very difficult time for you.
Hugo Swan: On the contrary. London’s deadliest maniac was as close to me as Kitty is now.
Katie: It’s Katie.
Hugo Swan: And the presence of sudden death makes one appreciate the act of living.
Katie: He did seem to appreciate it.

Edmund Hague: I like that word. Touched. Like the finger of God gave a few of us a little poke. Woke us up. Every subject gets me closer to finding exactly where it is He touched us.

Penance Adair: Trouble makes you troublesome. But nothing sets you off like good fortune.

Penance Adair: I belong here. And you. And all of us that’s Touched. We’re woven into the fabric of the world, and we’re meant to be as we are. We find Mary. We get her singing. They’ll all come to us, and they’ll be safe.
Amalia True: They won’t be safe.
Penance Adair: Less lonely then. And that’s a start.
Amalia True: It’s a start.