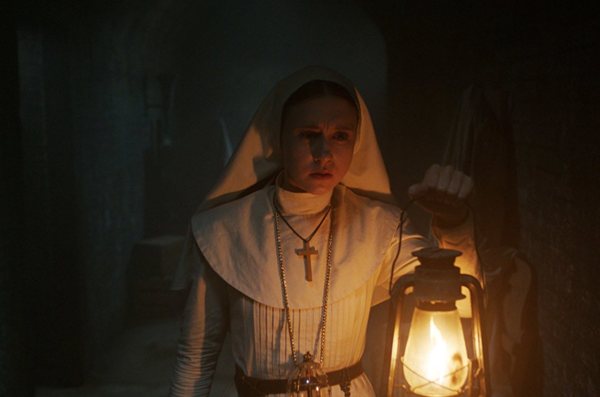 Supernatural horror spinoff from The Conjuring universe directed by Corin Hardy. When a young nun at a cloistered abbey in Romania takes her own life, a priest, Father Burke (Demián Bichir), with a haunted past, and a novitiate, Sister Irene (Taissa Farmiga), on the threshold of her final vows, are sent by the Vatican to investigate. Together they uncover the order’s unholy secret. Risking not only their lives but their faith and their very souls, they confront a malevolent force, as the abbey becomes a horrific battleground between the living and the damned.

[first lines; to Ed]
Lorraine Warren: I had a vision in Amityville. I had a premonition of your death. We have both seen the same inhuman spirit.

Lorraine Warren: The demon in your painting is real.

[referring to Victoria’s body as Burke removes a key from her corpse]
Sister Irene: Father, what is it?
Father Burke: It seems to be a key of some kind.
[they hear a noise and look around to see a door]
Frenchie: That’s the door the nuns would enter from to retrieve the supplies, so they wouldn’t have to leave the castle.
Father Burke: We should give her a proper burial.

[as they bury Victoria’s body, Irene notices a bell attached to one of gravestones]
Father Burke: It was common practice during the plague. When people feared to be buried alive. If you were unfortunate enough for it to happen, you could ring the bell to let those above ground know they have made a mistake.
Frenchie: I think being here is a mistake.

[referring to the fresh blood on the stone steps]
Sister Irene: How is that possible? It’s been weeks.
Frenchie: I told you. This place is, what’s the opposite of a miracle, Father?

Sister Irene: What is it, Father?
Father Burke: I was thinking of a similar incident I encountered in France. During the war, I was stationed there, near Lyon. I was told to investigate a boy with visions. But, unlike your case, after what I believe was careful evaluation, I made the judgment he was possessed, and proceeded to act accordingly within the laws of the Church.
[we see flashback to when Burke encounters a possessed boy, Daniel, who has been tied up]
Father Burke: My God. Daniel, what have they done to you?
Sister Irene: Was it a success?
Father Burke: The Church thought so. They believed the evil was cast out.
Sister Irene: But not you.

Sister Oana: Forgive us, we’re highly protective of our privacy. Some of the sisters would prefer I not speak to you at all.
Sister Irene: We appreciate your willingness to do so. Sister Oana, can you tell me about the history of this Abbey?
Sister Oana: It was built by a duke in the Dark Ages. The Duke of St. Carta. He wrote countless texts on witchcraft and rituals, in which to call upon the forces of hell. Hell used him to open a gateway so that an unspeakable evil would walk amongst us. But the Church stormed the castle. They sealed the gateway using an ancient relic containing the blood of Jesus Christ. The Church claimed the castle for their own and our perpetual praying began to secure the Abbey and contain the evil. For centuries it worked and evil was kept at bay, until the bombs of war shook the Abbey and evil found another way to open the gateway.
Sister Irene: Sister Oana, last night in the chapel, I saw a nun. She was, she felt anything but holy.
Sister Oana: Do you see her, too? I’ve seen her stalking the hallways at night. We all have. She looks like us, but she’s not one of us. It’s something unholy. It takes on different forms to deceive us and prey on our weaknesses. It appears as a nun so it can hide among our cloister until it can corrupt us all. I fear her presence means the portal has opened again. It made Sister Victoria commit the ultimate sin.

Father Burke: Abbess?
The Abbess: What is it that concerns you?
Father Burke: I’m afraid there’s something very wrong with this place, Abbess.
The Abbess: Like many places in this world, the Abbey has a long history. Not all good, but we repent.

Father Burke: That nun, I found her clutching the key in her hands. What does it open, Abbess?
The Abbess: It’s too late, Father. Sister Irene is lost.

Sister Oana: [to Irene] We need to pray, now. And whatever happens, whatever you may see or hear, keep your eyes forward and don’t stop praying.

[after chopping off the head of a demon nun that’s about to attack Burke]
Father Burke: Holy mother of God! Frenchie!
Frenchie: Thought you could use some help.
Father Burke: Thank you. But please, by all means, next time, do use the shotgun.
Frenchie: Well, I’m saving that for emergencies, Father.

[shooting down the burning nun that’s attacking them]
Frenchie: That felt like an emergency.

[referring to the writing etched on the door]
Father Burke: “Finit hic, Deo.” God ends here.
[they go through the door]
Sister Irene: We need to search everywhere to find the gateway.

[walking down a dark spooky looking hallway, we see the figure of a nun following Irene]
Demon: Sister Irene, I saw you.
[Irene turns and to see the nun]
Sister Irene: Hello?
[suddenly another nun appears and pushes Irene against the wall]

The Nun: You failed. Just as you have failed everyone in your life. Tomorrow, a village will be missing its idiot. You should’ve kept running when you had the chance, Frenchman.
Frenchie: I am French-Canadian.

[praying over the graves]
Sister Irene: Into your hands, Oh, Lord, we humbly deliver your servants. The nuns of St. Carta. They served you in this life with strength and faith. Deliver them now from every evil. And let them live with you in perfect grace, forever. Amen.
Frenchie: Thought this ground wasn’t holy anymore.
Sister Irene: It is now.

Sister Irene: Will you stay on in Biertan?
Frenchie: Oh, I think I’ve had my fill of Romania. My father was a tomato farmer, maybe I’ll try that for a while.
Sister Irene: Sounds a little boring for a world traveler like you.
Frenchie: Certainly hope so.
[Frenchie rubs his neck, where an inverted cross is revealed, showing he’s been possessed by Valak]

[last lines; 20 years later Ed and Lorraine Warren present footage of their attempt to exorcise a possessed Maurice at a university seminar, where Carolyn Perron is present]
Ed Warren: An exorcism can be very dangerous. Not only for the victim, but for anyone in the room. Take Maurice Theriault, his friends called him Frenchie. He was a French-Canadian farmer. Nothing more than a third-grade education. Yet, after he was possessed, spoke some of the best Latin I’d ever heard.
Lorraine Warren: And like that, an upside-down cross started to appear from within his body.
Ed Warren: Which brings me to the three stages of demonic activity. Infestation, oppression, and possession.


What do you think of The Nun quotes? Let us know what you think in the comments below as we’d love to know.