Sci-fi action horror sequel directed and co-written by Shane Black. In The Predator the universe’s most lethal hunters are stronger, smarter and deadlier than ever before, having genetically upgraded themselves with DNA from other species. When a young boy, Rory McKenna (Jacob Tremblay), the son of a former Marine and Special Forces commando, Quinn McKenna (Boyd Holbrook), accidentally triggers their return to Earth, only a crew of ex-soldiers, led by Quinn, and a disgruntled scientist, Casey Bracket (Olivia Munn), can prevent the end of the human race.

Dupree: [referring to the piece of Predator armor] What the f*** is that, Cap?
Quinn McKenna: It’s above our pay grade.

Traeger: [referring to the Predators] Gentlemen, remember. They’re large, they’re fast, and f***ing you up is their idea of tourism!

Quinn McKenna: [being interrogated] What’s with the polygraph? I thought this was a psych eval.
VA Psych: We need to know if you pose a threat.
Quinn McKenna: Well, I’m a sniper. Isn’t posing a threat kind of the f***ing point?

VA Psych: You spend most of your time now in country estranged from your wife and son.
Quinn McKenna: Look, I get it. Something went down in Mexico and nobody wants any witnesses.
VA Psych: Excuse me?
Quinn McKenna: You’re not here to find out if I’m crazy. You want to make sure the label sticks.
VA Psych: So you feel you’re being railroaded?
Quinn McKenna: I can see the tracks on the floor. I don’t see tracks on the floor, for the record.
VA Psych: You feel like you’re a stranger on your own planet, don’t you, Captain?
Quinn McKenna: Like an alien, you mean? That’s what you wanted. Do I get a cookie now?
Traeger: [in the next room watching] He saw something.
Sapir: Oh, yeah.
Traeger: Yeah.

Quinn McKenna: [to the MP as he’s being escorted to the bus]  You shove me again, I’m going to break your neck. Did I say that out loud?

Casey Bracket: Why do you call it the Predator?
Traeger: It’s a nickname. You know, the data suggests that it tracks its prey. Exploits weakness. Seems to, well enjoy it. Like a game.
Casey Bracket: That’s not a predator, that’s a sports hunter.
Traeger: Sorry?
Casey Bracket: A predator kills its prey to survive. I mean, what you’re describing is more like a bass fisherman.
Traeger: Well, we took a vote. Predator’s cooler, right? F*** yeah.

Coyle: How do you circumcise a homeless man?
Baxley: Here it comes.
Coyle: Kick your mom on the chin.

Nebraska Williams: [referring to Quinn] I just want to know who this m**herf***er is. Why are you here? Come on, man, this is the loony bus. Look at this m**herf***er.
Lynch: Loonies!
Coyle: Loonies, yeah.
Quinn McKenna: I had a run-in with a space alien.
Coyle: Oh, s**t.
Nebraska Williams: No, let him…
Coyle: Okay, that guy wins. That’s the best story I’ve ever heard. Classic story…
Lynch: That’s the winner right there. F***ing hell.
Quinn McKenna: Would you shut the f*** up?!
Coyle: Oh.
Quinn McKenna: They want to put a lid on it, so here I am. Stuck in Group Two. The sequel to Group One, only stupider.

Coyle: Hey, Baxley! If your mom’s v***na were a video game, it’d be rated E for Everyone.

Nebraska Williams: [referring to the motorcycle choppers] Get to the choppers!

Casey Bracket: I read your file. The guys in Mexico it killed, they yours? They’re going to need a patsy for that.
Quinn McKenna: You’re looking at him.
Casey Bracket: Yeah, I figured. Ex-sniper with PTSD, that’s actually kind of perfect.

Quinn McKenna: Guys, if we want to keep breathing, we need to find this thing. Expose it.
Casey Bracket: It’s called the Predator. It hunts people for sport.
Nebraska Williams: Technically, that’s not a predator. That’s like…
Casey Bracket: Thank you.
Coyle: It’s a hunter.
Casey Bracket: I said the same thing.

Baxley: Alright, when all this is over…
Baxley: [enters the RV, Quinn points his gun at him] f*** me in the face with an aardvark. I just want to be famous.

Large Predator: [subtitled, to the smaller predator] Tell me where it is?
[Quinn and the rest of the group watch in horror as the larger predator attacks the smaller one]

Coyle: What’s the big one? What’s the big one, Doc? Is that like the male?
Baxley: He didn’t even give a s**t about us. Just wanted to kill that thing.
Casey Bracket: [to Quinn] You saw that, right? Guys! Did you see that? He, I mean he grew an exoskeleton under his f***ing skin. What, are they hunting each other now?

Traeger: [referring to Rory] So, we find the kid, we find the ship. What the f*** we still standing here for?
Sapir: You don’t want to know what that one is?
Traeger: I know what it is. Our big boy’s a hunter. He brought his dogs with him.

Quinn McKenna: [referring to Rory] That little boy, managed to figure out alien technology.
Casey Bracket: You know, a lot of experts say that, being on the spectrum isn’t really a disorder. It’s actually the next step in the evolutionary chain.

Baxley: Figured something out. I think we’re going to die. We’re going to go hunt and fight the what, the army?
Coyle: We’re not going to fight the army…
Baxley: And some f***ing people from space!

Traeger: What do you say, buddy? You think you can get us in there? Because I’m not sure that you can.
Rory McKenna: Nice reverse psychology. I can do that too. Don’t go f*** yourself.
Traeger: [laughs] That’s good. Come on.

Rory McKenna: That’s my dad. He’s going to come save me now.
Traeger: Oh, is he? Is that what he’s going to do? I’ll tell you what, buddy, if it is your daddy, and I truly hope that it is, he’s got to be just about the dumbest m**herf***er I’ve ever met. I mean, a ranger sniper tripping wire sensors? He’s got to be creating a diversion. It’s a f***ing diversion.

Casey Bracket: [referring to the Predator] McKenna, I don’t like this! What’s he doing in there?
Traeger: It’s using the translator.
Casey Bracket: Hello. I have enjoyed watching you kill each other. I came here to destroy this vessel. You cannot have it. What you can do is run. I detect one among you who is a true warrior. The one called McKenna. He will be your leader. He will be my prize. I offer time advantage. Go.
Casey Bracket: What the f*** is time advantage? Like a head start?

Traeger: [referring to the Predator shoulder cannon] Hey. On Halloween, this blew up a whole house. How do you shoot it?
Rory McKenna: You don’t. It just fires by itself when it’s being attacked.
Traeger: Seriously? Oh, s**t.

Dr. Yamada: [referrering to the Predator nanotech armor suit] What the hell is that?
Quinn McKenna: That’s my new suit, bubba. I hope they got it in a forty-two long. 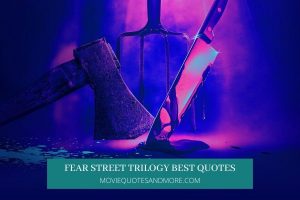