The Pursuit of Happyness (2006) Movie Review 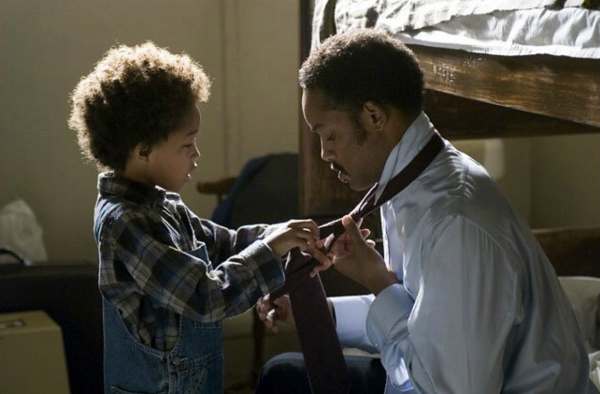 A Story of Success

The Pursuit of Happyness is a refreshing account of the power of the human spirit and a heartwarming tale of unlikely accomplishment. It thoroughly captivated me from start to finish. I found that this uplifting story of perseverance and the arduous road to achieving true happiness is told in an impressively cohesive and artful fashion.

Based on a true story, this film narrates the life of Chris Gardner, a financially struggling bone density scanner salesman in 1980s San Francisco. Between his declining sales, having to send his child, a five-year-old named Christopher, to daycare, and taking care of seemingly endless bills and rent, he is far beyond the poverty line. Any chance of achieving a happy life seems futile for Chris. On his daily walk from work, Chris encounters the stock market building. He immediately idolizes the happiness and wealth of the prosperous stockbrokers, and yearns for that type of genuine happiness.

With little success in his own field, Gardner boldly concludes that he must pursue a career in the stock market. Miraculously, his persistent initiative attracts the attention of major employees at the Dean Witter Reynolds firm. Chris manages to impress them with his wit and drive, despite being thoroughly inexperienced and showing up to an interview in work clothes covered with paint. Gardner then begins a highly coveted, fiercely competitive unpaid internship at the brokerage firm. Eventually, he fails to keep up with his rent and falls into debt. This leaves him abandoned by his wife and evicted from his apartment. Soon enough, however, Chris Gardner bounces back from this all-time low.

The rest of the movie details Gardner’s unrelenting work while living as a homeless working father. He has to juggle between his internship at the firm, caring for Christopher, and finding a spot in whatever homeless shelter is vacant. *Spoiler alert* The story of Chris’s struggles and triumphs thoroughly engaged me. By the end of the movie, I felt so deeply attached to Chris and his son that when he landed the position at Dean Witter Reynolds out of nineteen other people, I almost cried along with him.

The Pursuit of Happyness is truly a genuine, raw, and emotion-evoking film that strikes a strong sense of empathy and connection within its viewer. The themes of resilience, family, and happiness really resonated with me and can apply to any viewer’s life as well. Despite my initial uncertainty with my choice of movie, disinterest in the stock market, and intolerance to longer movies, I consider this film appropriate for all audiences and absolutely outstanding.

Aside from the compelling plotline, the acting in The Pursuit of Happyness is impeccable. Will Smith delivers an exceptional performance and portrays the character of Chris Gardner flawlessly. Smith performs with intense passion and remains immersed in his character, which is amazing to watch. Jaden, his son, also gives a high-quality performance, one that is impressive at such a young age. Additionally, their father-son chemistry was evident on-screen. I found that their heartwarming bond contributed to the warm and positive feel of the film.

An equally significant aspect of the film is its undeniably realistic nature. It is easy to empathize with the struggling Gardner family and picture one’s own family in the same position. The Pursuit of Happyness illustrates the rocky road to triumph in a non-romanticized, pragmatic fashion. The atrocities of homelessness and poverty are portrayed free of sugarcoating, in a way that impacted me deeply. The movie opens the viewer’s eyes to the actualities of building oneself from the ground up.

Conclusively, I would highly recommend Gabriele Muccino’s The Pursuit of Happyness to anyone seeking an authentic, heartening film. Nothing is more satisfying than a sincere, rags-to-riches story of success.