Inspired by true events, produced and directed by Alejandro G. Iñárritu. The Revenant (2015) follows an ill-fated fur trapping expedition where hunter Hugh Glass (Leonardo DiCaprio) is brutally attacked by a bear and then robbed and left for dead by members of his own hunting team John Fitzgerald (Tom Hardy), Andrew Henry (Domhnall Gleeson) and Jim Bridger (Will Poulter). When Glass survives against all odds, guided by sheer will and the love of his family, he sets out on a treacherous journey to exact revenge on his betrayers.

'As long as you can still grab a breath, you fight. You breathe. Keep breathing.' - Hugh Glass (The Revenant) Click To Tweet

Hugh Glass: [subtitled] It’s okay son. I know you want this to be over. I’m right here. I will be right here. But you don’t give up. You hear me? As long as you can still grab a breath, you fight. You breathe. Keep breathing.

Hugh Glass: The safe thing to do is track a new course back upon them.
John Fitzgerald: And then what we going to do? Sit out here like a bunch of Goddamn dogs? You and your half-breed son get to walk on out? I’m talking to you.

John Fitzgerald: The proper thing to do would be to finish him off quick.

Andrew Henry: He’s to be cared for as long as necessary.
John Fitzgerald: I understand.

Andrew Henry: What happened?
John Fitzgerald: We did what we had to do. He was buried right.

John Fitzgerald: You alright there, kid? Your head in the right place?
Bridger: I guess. I can’t help thinking about whether we did the right.
John Fitzgerald: No! Ain’t our place to wonder. The good Lord got us on a road whether we choose it or not. My pop, he weren’t a religious man, you know? If you couldn’t grow it, kill it, or eat it, he just plain old didn’t believe in it, that was it. And this one time he head on up the old Saba hills, San Saba hills? He joined a couple Texas Ranger buddies of his to hunt, you know? Pretty routine, he done it like a hundred times before, should have been a three-day kill but, on the second day, it all went f***ed. Somehow that night he lost his buddies, and to top it off, them Comanches went and took the horses so, he was starving and delirious, and he crawls up into this mott, this group of trees out in the middle of nowhere just sticking up in this ocean of scrub and he found religion. At that moment he told me, he found God. And it turns out that God, he’s a squirrel. Yeah. A big, old meaty one. “I found God,” he used to say. “And while sitting there and basking in the glory and sublimity of mercy, I shot and ate that son of a b**ch”. Yeah. You might want to close your eyes kid.

John Fitzgerald: The way I see it, I done saved your life twice now, boy. I ought to be God to you.

Hugh Glass: All I had was my boy, and he took him from me. Do you understand?

Hugh Glass: He’s afraid. He knows how far I came for him. Same as that elk, when they get afraid they run deep in to the woods. I got him trapped, he just, He doesn’t know it yet.
Andrew Henry: How can you be so sure?
Hugh Glass: Cause he got everything to lose.

Hugh Glass’s Wife: As long as you can still grab a breath, you fight. You breathe. Keep breathing. When there is a storm and you stand in front of a tree, if you look at its branches, you swear it will fall. But if you watch the trunk, you will see its stability.

John Fitzgerald: You’re forgetting your place, boy.
Hugh Glass: As far as I can tell, my place is right here on the smart end of this rifle.

John Fitzgerald: Life? What life are you talkin’ about I ain’t got no life! I just got a living and the only way I get to do that is through these pelts!

Hugh Glass: I can’t remember my wife’s face. Last week, she was still with me. Now she’s gone. I worry I won’t recognize her when I get back home.
Andrew Henry: Is it true you killed an officer?
Hugh Glass: I just killed the man who was trying to kill my son.

John Fitzgerald: You lost?
Hugh Glass: I’m here to take you back to Fort Kiowa, where you will be tried for murder.
John Fitzgerald: Is that so? I ain’t crazy about your plan. Besides, I got one of my own. We had a deal, Glass! I tried to tell your boy, alright? I tried to tell him, but he wouldn’t listen and he kept on screaming. He was going to get everybody killed. But you and me, we had a deal. You know what happened out there. And on my soul, the Lord, He knows what happened out there.
Hugh Glass: There was no deal.

Hugh Glass: You killed my boy.
John Fitzgerald: Well may be you should have raised a man, instead of some girly little b**ch. Goddamn it. You came all this way just for your revenge, huh? Well, you enjoy it, Glass. Cause there ain’t nothing going to bring your boy back.
Hugh Glass: No, it won’t. Revenge is in God’s hands, not mine. 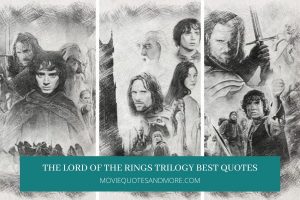