Home / Best Quotes / The Spy Who Dumped Me Best Quotes – ‘We’re semi-professionals at this point.’ 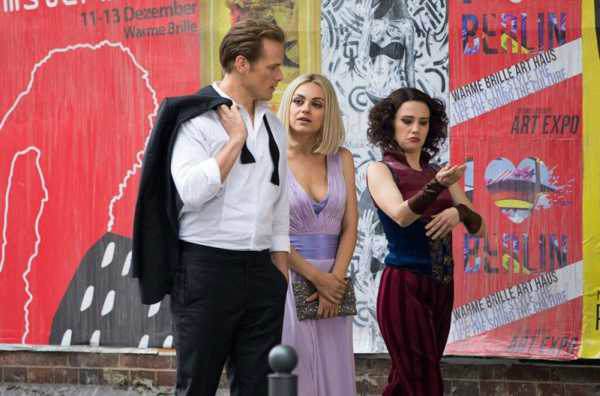 Action comedy  directed and co-written by Susanna Fogel which follows best friends Audrey (Mila Kunis) and Morgan (Kate McKinnon), who are thrust unexpectedly into an international conspiracy when Audrey’s ex-boyfriend (Justin Theroux) shows up at their apartment with a team of deadly assassins on his trail. The duo jump into action and go on the run throughout Europe from assassins and a suspicious-but-charming British agent, Sebastian (Sam Heughan), as they hatch a plan to save the world.

Morgan: What are we doing? Are we going to sit in the corner all night? It’s your birthday.
Audrey: I’m thirty years-old, I wear a Hawaiian shirt. My boyfriend dumped me in a text.
Morgan: Let’s set his shit on fire.

Audrey: Have a great day.
Sebastian: Aren’t you going to ask me if I can take it to my car?
[Audrey walks with Sebastian to his car]
Audrey: You know, some might say that I’m not exercising good judgement following a strange man somewhere. This is how people get stuffed in the back of a van, right?
Sebastian: That makes this rather awkward.
Audrey: Hm?
Sebastian: Get in the van.
[the van door opens with Sebastian’s partner, Patel, in it]
Audrey: What?

Patel: We just want to talk about Drew Thayer. He’s your boyfriend, right?
Audrey: But he dumped me.
Sebastian: Drew is CIA.
Audrey: I’m sorry, what?!

Audrey: I need to talk to you.
Morgan: What?
Audrey: Two guys show up at my work, they want to talk about…
[we see Audrey sat in the back of the van with Sebastian and Patel]
Sebastian: Your ex-boyfriend, Drew, is CIA.
Morgan: Oh, my God.

Audrey: I know you’re a spy.
Drew Thayer: It’s a long story, and I’m going to explain everything.
Audrey: What’s on your forehead?
[a red dot appears on Drew’s forehead]
Drew Thayer: Oh, shit!
[suddenly Drew gets shots fired at him]

Audrey: I don’t trust anyone anymore.
Morgan: You trust me though, right?
Audrey: Yes, of course I trust you. You don’t count.
Morgan: Okay, good. Because this is not some fake spy friendship that the Russians put together.
Audrey: Dude, shut up. I know.
Morgan: Okay, Drew said that if we don’t deliver this package a lot of people are going to die. Audrey: What if we don’t do it, and then there’s like a terrorist attack or something?
Morgan: Well, what did he say to do?
Audrey: We have to get it to a café in Vienna.
Morgan: Austria, Vienna?
Audrey: Yes, that’s what he said.
Morgan: Okay. Well, why don’t we do that then?
Audrey: Do what, go to Europe when a bunch of people are trying to kill us?
Morgan: Do you want to die having never been to Europe? Or do you want to go to Europe and die having been to Europe?
Audrey: Why are those my only two options?!

Morgan: I think it looks suspicious if we go through international security with no luggage and just a weird trophy, right?
Audrey: Wait, wait, wait. Wouldn’t it be more suspicious if we go through security with a suitcase that’s totally empty except for the weird trophy?
Morgan: Yes. We need more trophies though. That’s what we’ll do, we’ll be the kind of women who jet off to Vienna with all of our awards. We’re notable, we’re recognized. We have trophies, baby.
Audrey: Bett’s grandson?
Morgan: Yes.

[to Audrey; as they are going through airport security]
Morgan: Don’t be nervous. People get caught when they’re not confident.
[to the security guard]
Morgan: Hello, are you new? I usually deal with Cesar.

Audrey: Shit. We’ve got to get rid of our phones. Bad guys can track us even if they’re off.
Morgan: Oh, right. I’ve actually known that for a long time. I went to performing arts with Edward Snowden.
Audrey: Oh, that’s right. You used to date Snowden.
Morgan: No. No, he tried. God, he was obsessed with me. He was really into scone. When the whole thing was going down, I was like, “Why is no one talking about the fact that Edward Snowden is really into scone?” Give me your phone?
Audrey: Oh, yeah.
[Morgan places their phones on the ground]
Morgan: Bitch!
Audrey: Oh!
[she starts stomping onto the phones to break them]
Morgan: Bitch!

Sebastian: In a moment everyone is going to start shooting. They all want what you’ve got and they’ll kill each and every one of us until they get it.
Audrey: Oh, my God.

Audrey: Is this really happening?
Morgan: Yeah, because you dated a spy.

Audrey: Why is this happening?
Morgan: I don’t know, because you dated a spy.

[on the run they get into a car which has a stick shift]
Audrey: It’s a stick! Do you know how drive a stick?
[to the owners of the car as tries to put the gar in gear and drive away]
Audrey: I’m so sorry.
Morgan: It’s an emergency.
Audrey: Do you know how to change a gear?
Morgan: What’s a gear?
Man: Get out!
[the slowly crash into a magazine stand]
Audrey: Get out. Of course.

Audrey: [to Morgan] It’s flashdrive. You have to swallow it before they come back.

Nadedja: I ask questions. If I don’t like the answer…
[she back flips and turns to kick Morgan on her nose]
Audrey: Oh, my God!
Nadedja: You feel pain.
Morgan: I’ll tell you anything you want to know. I’ve never kept a secret in my life. Audrey shaves between her boobs.
Audrey: Morgan flosses with her hair.
Morgan: She has sex dreams about Minions.
Audrey: Just the one Minion with the one eye.
Morgan: She Googled it on my computer, and now I get a lot of weird ads.

Sebastian: [to Audrey] An international terrorist group is planning a series of assignations. A lot of innocent people are going to die unless we stop them.

Audrey: [to Sebastian] Would you trust us to help you?

Morgan: There is no turning back for us. We’re semi-professionals at this point. Professional. We are professional.

Morgan: I think that we could be a real help to this operation.

Audrey: This is surreal, and I honestly think I’m in shock.
Morgan: You are incredible and I want you to own it.

Sebastian: [to Audrey] You have a real instinct for this.

Audrey: I do play a lot of video games.

Morgan: [to Audrey] This is insane. Have you ever felt so alive?

Audrey: Just don’t die, okay? I would die without you, and then we’d both be dead.

[as the assassin that was trying to kill them gets run over by a bus]
Morgan: Oh, my God! What happened?

[to Sebastian and Patel]
Wendy: You two, my office.
Morgan: What? Why have we been spending all of this time talking to men, when this being has been floating through the halls of the building? Oh, my God. That is the Beyoncé of the government.

[to Sebastian and Patel]
Wendy: You two, my office.
Morgan: What, you’re the boss? And yet you have not sacrificed one ounce of femininity. That is the Beyoncé of the government.

What do you think of The Spy Who Dumped Me quotes? Let us know what you think in the comments below as we’d love to know.