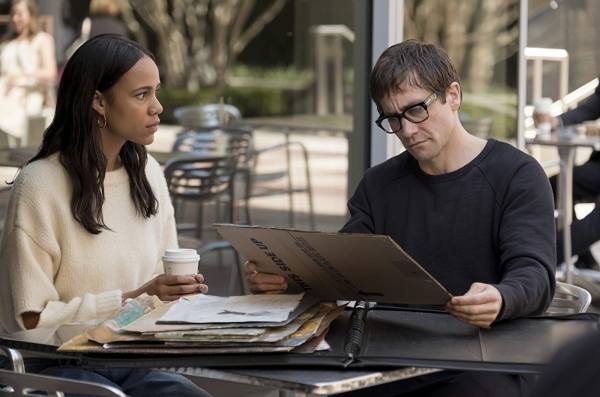 “A bad review is better than sinking into the great glut of anonymity.” Velvet Buzzsaw begins with Morf Vanderwalt (Jake Gyllenhaal) a contemporary art critic attending an art exhibition with his friend and agent Josephina (Zawe Ashton). Josephina works for Rhodora Haze (Rene Russo) who is also an agent and owns one of the biggest contemporary art galleries in Los Angeles, in the 1970s she was part of a punk rock band called Velvet Buzzsaw, but she eventually abandoned it for the superficial world of art. One day when Josephina returns to her apartment block she finds a prostrate figure, lying outside of his apartment, dead. During the same night she hears cat’s sounds emanating from the dead man’s apartment, when she enters she discovers a house teeming with paintings and sketches, but the quantity does not startle her as much as the quality, without a moment’s hesitations she calls Rhodora.

After a while, these mysterious paintings becomes part of Rhodora’s next exhibition which attracts a lot of interest and fascination from art lovers and artists alike, who cannot stop gazing at them, and some even think that the paintings appears to move, it’s as if the enigmatic painter had imparted motion while he painting them. After the success of Rhodora’s exhibition, we learn that the mysterious person responsible for such exhilarating art is called Vetril Dease and every person who procures or sells his art cannot escape a shocking and disturbing death. Morf is the only one who realises that these deaths are linked with the newly discovered art and starts researching Dease’s past life with disturbing consequences.

Dan Gilroy in 2014 released Nightcrawler, a thought provoking dark satire with a haunting performance from Jake Gyllenhaal, after five years Gilroy and Gyllenhaal are reunited in Velvet Buzzsaw, a horror/ satire film about the superficial art world in which Gyllenhaal plays a bisexual contemporary critic whose articles can make or break an artist’s career. He is a very unlikeable character, midway through the film he attends a funeral and critiques the organ music, which he calls it “cheesy” and wonders about the colour of the casket and if it was bought “on sale”. This is one of the main problem of the film, there is an abundance of unlikeable characters, a thing that worked well on Nightcrawler but because Velvet Buzzsaw is also a horror film, we need to feel sympathy for the many characters who meets their eventual demise by Dease’s paintings.

A horror film to be able to function and scare its audience is through the way it makes you sympathise with its main characters, so when something is lurking in the shadows or a character is pursued by an unknown entity the audience needs to feel dread or anxiety, two elements lacking in Velvet Buzzsaw. Even though Gilroy fails to create frightening moments he kills his characters in a very creative and surreal way. The worst thing about Velvet Buzzsaw is that it feels reserved, it does not fully embrace its own nonsensical plot and uses the elements of surreal and horror sporadically, elements that could elevate the film. Velvet Buzzsaw could have been a unique film akin to Nicolas Winding Refn’s The Neon Demon (2016) or Ingmar Bergman’s Hour of the Wolf (1968). Refn’s film is a surreal satire about the fashion world and its obsession with youth and beauty, a film that becomes weirder and more surreal as it approaches its climax. Bergman’s film is about an artist’s disintegration, and how he loses his mind by letting his nightmares permeates his real life and he starts communicating with horrifying spirits who walks on walls and have demonic characteristics.

These two films mentioned above like Velvet Buzzsaw share a very intriguing premise but Buzzsaw falters in the execution and is incessantly tries to satirise unsuccessfully the superficial art world in a very superficial way, while muting the most interesting and unsettling parts of the film. Vetril Dease and his paintings are the most interesting aspects of the film. A large number of art painted by Dease is reminiscent of the Baroque style, especially Rembrandt’s use of minimal colour palette and chiaroscuro but some depicts violence akin to Caravaggio’s paintings like Judith Beheading Holofernes or David with the Head of Goliath. While some evokes Van Gogh’s glaring and surreal paintings like Sower at Sunset and some expressionistic works like Edvard Munch’s The Scream. The way the paintings comes to life in Gilroy’s film are very creative and believable, in a surreal way they orchestrate their attacks and they do not become repetitive, these attacks are the most entertaining moments of the entire film.

Verdict: Velvet Buzzsaw underwhelms, even though has a great premise, it does not fully embrace its silliness, thus losing an opportunity to become a memorable film, which tries unsuccessfully to satires the superficial art world in a very superficial way.