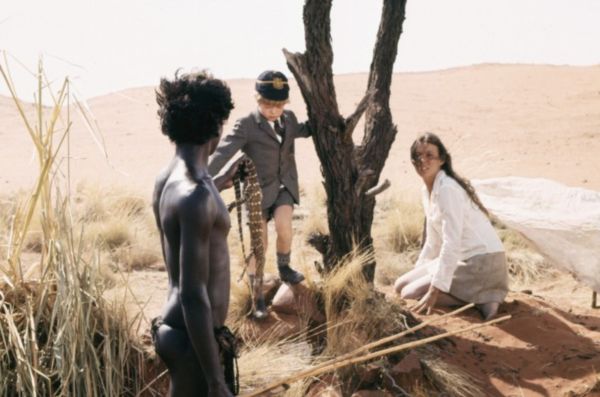 Few films capture the essence of a spiritual journey the way that Nicolas Roeg’s Walkabout does; even if its main characters didn’t intend in partaking in one. We see glimpses of the psyches of all three of them, two on a quest woven by grief and adaptation, one trying to accomplish the age-old notion of becoming a man. Not everyone in Walkabout has a happy ending, but whether or not their rituals are truly completed is up to the viewer. Walkabout begins with the screeching of a train and subsequent shots of city life, a young girl (played by the lovely Jenny Agutter) in a singing class and a younger boy (Roeg’s son, Luc Roeg) playing outside in a school uniform.

There’s a didgeridoo playing in the background, as if foreshadowing the native land that would be forced upon these children. As they play in a swimming pool (only a few meters from the ocean itself) the father gives them a strange look of distaste. Perhaps what’s to come is a symptom of his stress and anguish in modern civilized life? Again, up to the viewer. Like many great films, Walkabout remains elusive in as to why the father brought his children out to the desert to carry out a grisly murder-suicide (burning their car in the process), but the paralleling plot of the entire film can raise questions as to what finally made him collapse. But, nevertheless, this breakdown is key in beginning the children’s journey.

They are stranded in the Australian outback, and the ants and insects rise from their homes to reclaim the fruit that mankind had taken from them. Hungry and alone, they begin to wander, hoping to find their way home. As if symbolizing their bond with nature and the ground beneath them, the first time the kids sleep on the hardened rocks of the wild, we see faded shots of both their faces overlap with that of the environment. It’s clear that they won’t exit this journey the same way they entered. They stumble upon an Aboriginal, undergoing his Walkabout. His native people have sent him to wander about the Outback to live on his own as part of his spiritual upbringing. With haste the little boy communicates, “Water,” by pointing to his mouth, and the Aboriginal boy just laughs and finds it with ease, instantly in the next shot.

He forms a playful bond with the boy and an unspoken romance with the girl. Even though the kids need his help, the viewer understands that the Aboriginal feels a need be near them as well. Roeg’s direction is part of what makes it the definitive spiritual film and not a simple adventure film. A former cinematographer, he paints the Outback with lush color. Roeg determines whether to make it a thing of beauty or an unforgiving Hell, accompanying the children’s suffering with shots of decaying animals and predators hunting prey, buzzards circling above them. There are also little implications to the way their father’s suicide has affected them, brief callbacks to the moment his body thudded to the ground.

The dialog is naturalistic and conversational, combining the mundanity of their lives beforehand with that of the wonderment of their circumstances. In some stretches of time, the children don’t even talk about going home, as if they’re settling into life with the Aboriginal. But the full-fledged integration to certain lifestyles, and the full abandonment of certain luxuries can be nearly impossible, and despite their longing to be with the Aboriginal, they are generations apart. This film manages to have everything; adventure, spirituality, romance, questions that are unanswered yet intriguing, and, of course, tragedy.

The film is, much like its environment, unforgiving to some of its players, and it doesn’t end without despair, but it does so without compromising its instillation of a desire for more. Like much of Walkabout, its final scene is very much for the audience’s interpretation. But this reviewer sees it as the young girl understanding the necessity of her own personal walkabout, and how it has affected the woman she’s become.