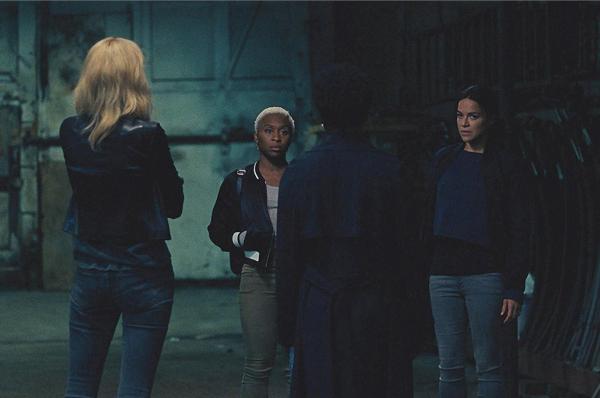 Heist thriller directed and co-written by Steve McQueen. Set in contemporary Chicago, amidst a time of turmoil, the story follows four women with nothing in common except a debt left behind by their dead husbands’ criminal activities. Tensions build when Veronica (Viola Davis), Alice (Elizabeth Debicki), Linda (Michelle Rodriguez) and Belle (Cynthia Erivo) take their fate into their own hands and conspire to forge a future on their own terms.

'When you subtract love from any equation, from any situation, from any location, the result is always hurt and pain on all sides. That is why we need to bring love back into the equation.' - Reverend Wheeler (Widows) Click To Tweet

Jamal Manning: This is my brother.
Jatemme Manning: Jatemme.
Jack Mulligan: I love you too.

[referring to Harry and his partners]
Fuller: Medical examiner say he can still ID them?
McArdle: I think off the teeth maybe?
Fuller: I always said he should burn in hell. But, hey, Chicago will do.

[as they are watching Harry’s funerals from a distance]
Jamal Manning: Harry Rawlings. He never messed with me, I never messed with him. We’re in different games. I always had respect. So why did he hit me now?
Jatemme Manning: Oh, I know why. He thinks you’re setting your sites one something high and you’re getting sloppy.

[at Harry’s funeral]
Jack Mulligan: Mrs. Rawlings, I’m Jack Mulligan. I had the privilege of working with your husband a couple of times. He was a wonderful man. I’m so sorry for your loss. If there’s anything I can do, please don’t hesitate to ask. I’m not a hard man to find, and God bless.

Jamal Manning: Everybody out there involved in Harry Rawlings business as far as the eye can see. But you, you’re here living with him, and you’re not.
Veronica: I didn’t work for Harry. I work for the teachers’ union.
Jamal Manning: I understand. Criminals are like cops, they don’t bring their shit home. You have no idea, do you? Or did you choose not to know? It doesn’t matter.

Veronica: Listen, I don’t have your money. Now, why don’t you just go out and make more?
Jamal Manning: This is about my life! This is about my life.
[he holds up Veronica’s dog by the neck and the dog whimpers in pain]
Jamal Manning: And because it’s about my life, it now becomes about yours.
Veronica: I told you, I don’t know anything…
Jamal Manning: No, and even if that’s true, you have a nice penthouse here. You got a lot of nice furniture, you got cars, you got a closet full of clothes, none of which burnt up in the van, by the way. I’ll give you one month to liquidate.
Veronica: I’ll call the police.
Jamal Manning: Mrs. Rawlings, do you know what the police did the night that Harry died? Do you? They laughed. They laughed over his melted, burnt body, and they scraped whatever they could into a bag and they went to a bar to celebrate, because they give zero fucks about Harry Rawlings fucking widow. You’re nothing now. Welcome back. So, uh, my money, one month.

Veronica: Listen. We’re in trouble. It was Jamal Manning’s money that our husbands stole.
Alice: Who’s that?
Linda: Somebody you don’t want to fuck with.
Veronica: The money burnt up in the van, and Jamal Manning, he wants it back.
Linda: From us? Or from you?
Veronica: Harry left me the plans for his next job. It’s worth five million dollars. I take two million and give it to the Mannings. We split the rest.
Alice: You want us to…
Veronica: Pull off the job, yeah. A million apiece.
Alice: A million?
Veronica: Now, maybe you have a secret plan or a special skill that can make you that kind of money. But if you don’t, there’s an address in the pads of money that I just gave you. Meet me there tomorrow at 11:15.
Alice: What if I say no?
Linda: She’ll give him our names.
[Veronica gets up to leave]
Linda: 11:15 AM?
Veronica: PM.
Linda: It’s not easy. I have kids.
Alice: I don’t want any trouble.
Veronica: Listen, our lives are in danger. Our husbands aren’t coming back. We’re on our own. Now, I’ll be there tomorrow. I hope to see you there.

[giving a speech to his congregation, which includes Jammal]
Reverend Wheeler: So, what has happened in the world that normal now passes as excellence? When did we lower our standards? There seems to be no expectation to go above and beyond what one might know, or might want to know. It seems people are blissful in their own ignorance. How far have we fallen? Indeed, how far have we fallen? We are living in an environment where people are blind. What you don’t see, you don’t know! Out of sight, out of mind! So now ignorance is the new normal.
[congregation applauds]
Reverend Wheeler: In fact, ignorance, ignorance is the new excellence. The less you know the more seemingly you gain. Not to care is deemed to be smart. When you subtract love from any equation, from any situation, from any location, the result is always hurt and pain on all sides. That is why we need to bring love back into the equation. Love. In Jesus’s words, “Thou shalt love thy neighbor as thyself.” So he can hear you on high, say it with me. “Thou shalt love thy neighbor as thyself.” Even when it ain’t easy! Even when you’ve been done wrong! When this world’s got you down on your knees, love thy neighbor as thyself. Alright. Amen.

[referring to Alice]
Veronica: We can’t do it, the two of us. It’s over. She’s a flake.
Linda: Just give her five minutes.
Veronica: Why?
Linda: Because our lives are trickier than yours.
Veronica: What’s tricky about being on time? If she can’t show…
[just then Alice walks through the door looking dressed up]
Veronica: What the hell are you wearing?
Linda: A condom.

Alice: Look, I’m here. I didn’t have to come, but I did.
Linda: We’re screwed.
Veronica: You know what, if you don’t want to be here, then maybe you shouldn’t. There’s the door.
In or out? Out, and you take your chances with the Mannings. In, and there’s no going back.
Linda: How do we even know what “in” means?
Alice: Why should we trust you, anyway?
Veronica: Because I’m the only one standing between you and a bullet in your head. Because I wouldn’t ask you to do anything I wouldn’t do myself. Leave, and you’re on your own.
Linda: I’m in.
Alice: In.

[giving Alice some cash]
Veronica: This is for the guns.
Alice: Guns?
Veronica: Three Glocks. Ammo too. No more than two thousand dollars.
Alice: Me? From where?
Veronica: It’s America.

Veronica: [to Alice] We have a lot of work to do, crying isn’t on the list.

Veronica: Your husband’s been dead a month.
Alice: Why are you being such a bitch? You’re being a c*nt.
Veronica: Don’t you say that word to me.
Alice: It’s appropriate. You’re being a c*nt. A friend lets a friend know when she’s being a c*nt.
Veronica: You’re not a friend. You’re just a stupid girl with nothing in your head.
Alice: I’m not stupid.
Veronica: Then why don’t you keep your legs shut?
Alice: David is going to help us.
Veronica: Help us do what?
Alice: He thinks the blueprints are a safe room. He’s going to find out where it is.
Veronica: You idiot.
Alice: You’re a cold, old bitch
[Veronica slaps her and Alice slaps her back]
Alice: I’m done being treated like shit. Not again. Not by you. Not by anyone.

Linda: We solved our problem.
Veronica: What’s this?
Linda: This is Belle. She’s fast, she’s smart, and she can drive. Come on, we can’t do this the three of us, we need a driver.
Veronica: This is not your place, please ask her to leave.
Belle: I’m standing here, you can talk to me.
Veronica: I don’t know you.
Belle: You don’t have to. I’m happy to leave right now.
Alice: Wait. We need a driver.
[Veronica looks at Alice, and Alice shrugs]
Veronica: You girls happy to split your cut?
Linda: Split our cut? It’s equal or nothing.
Veronica: [to Linda] You vouch for her?
Belle: I don’t require a vouch.
Veronica: [to Alice] We’re going to need another gun.
Belle: I got my own. You need to watch how you talk to me.
Veronica: If you’re in, we’ll need to get you started right away.

Jack Mulligan: I’ll tell you exactly why I fired your campaign manager. He told me we would get the endorsement of Wheeler and now the good reverend has decided to sit this one out. Well, he doesn’t get to do that.
Tom Mulligan: Oh. Let me get this straight. You fire Hillsman. He’s been working with our family for thirty years. So you just put a bullet in him. Now when the polls drop to, what, three percent? Why? Why?
Jack Mulligan: I got a new guy coming on. A black guy. British.
Tom Mulligan: Black guy? Oh, really? A black guy.
Siobhan: Gavin Cunningham.
Tom Mulligan: What?
Siobhan: Gavin Cunningham.
Tom Mulligan: [yelling] Well, fuck me, and fuck him! And fuck you, and fuck the fucking horse you came in on! You fucking asshole! What a fucking asshole you are! Talk about loyalty. Hey!

Veronica: Mr. Mulligan, you said whenever I needed help. Now, your family’s been involved in Harry’s life for many years. When I say help, I mean help.
Jack Mulligan: I understand, but I’m not my father. As you can see, the years have taken a toll on him, and I do not want to go down that same road. So with much admiration and respect for your late husband and yourself, of course, I don’t see what I can do. What I’ve learned from men like my father, and Harry, is that you reap what you sow.
Veronica: Let’s hope so.

[referring to Veronica]
Linda: She’d be a lot nicer if she just took that stick out of her ass.
[Veronica appears behind them]
Veronica: You know why we need a new driver? The last one was killed. So if you’re not serious…
[there’s a pause]
Linda: If this whole thing goes wrong, I just want my kids to know that I didn’t sit there and take it. I did something.

Veronica: Our go date is in three days. The night of the debate. Now, all of our work is worth nothing if we don’t move this money and fast. The notebook says five million dollars. That’s exactly the amount of money Mulligan was accused of taking in commission kickbacks. So over here we have two million dollars. Twenty Tupperware boxes. Each box has a hundred thousand dollars in a hundred dollar bills. It weighs forty-four pounds. Now over here we have two million dollars, forty Tupperware boxes. Each box has fifty thousand dollars in fifty dollar bills. It weighs eighty-eight pounds.
Linda: I feel like I’m in school.
Belle: Tell me about it.

Veronica: We got to start thinking like professionals, because we’re in business together. There’s not going to be some cozy reunion. After this job, we’re done. We have three days to look and move like a team of men. The best thing we have going for us is being who we are.
Alice: Why?
Veronica: Because no one thinks we have the balls to pull this off.

[last lines; after running into each other at a diner and initially ignore each other, as Alice walks out, Veronica follows her outside and calls out to her]
Veronica: Alice? How you been?

What do you think of Widows quotes? Let us know what you think in the comments below as we’d love to know.