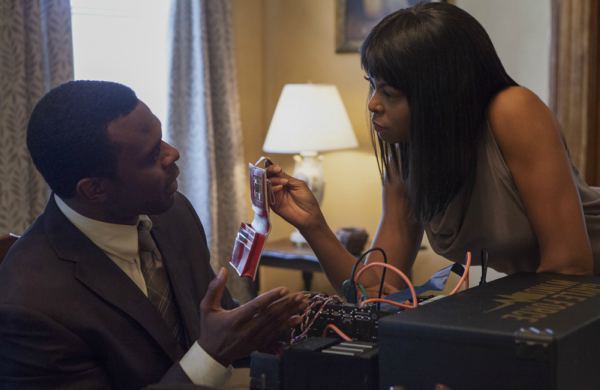 Thriller written, directed and produced by Tyler Perry, the story follows faithful wife Melinda (Taraji P. Henson), who tired of standing by her devious husband, Robert (Lyriq Bent), is enraged when it becomes clear she has been betrayed.

Melinda: You don’t know what he did to me. You don’t know. He was so charming, so slick. “Forever,” that’s what he said. Do you know the last thing a woman wants to hear about her man is that he’s cheating on her. Every time a black woman gets out of hand she’s a stereotype. I’m sick and tired of hearing that.

Doctor: So, do you think you have an anger problem?
Melinda: Don’t tell me I don’t have the right to be angry, you don’t know what he did to me.
Doctor: Help me understand this injustice, just tell me what happened.
Melinda: How far do you want to go?
Doctor: Why don’t we just start from the beginning?
Melinda: He was beautiful, got to give him that. I was everything he needed me to be. I was strong when he needed me to be. I played weak. Eighteen years seem to pass like days.

Melinda: [to Robert] You lie and you cheat.

Melinda: [to Robert] You’re still messing around with her!

Doctor: Did you ever consider that maybe there’s another way to look at this? Maybe he did mean what he said. Maybe the deceit isn’t what you think. Would you allow room for that possibility?
Melinda: He caused all of this. All of it. He owes me.
Doctor: What do you think he owes you?
Melinda: Every damn breath of his body.

Doctor: Maybe he did mean what he said. Maybe the deceit isn’t what you think.
Melinda: Oh, no, I don’t think so.

Man: I want to offer you prayer.
Melinda: I would save my prayers for the wedding day.

What do you think of Acrimony quotes? Let us know in the comments below as we’d love to know.