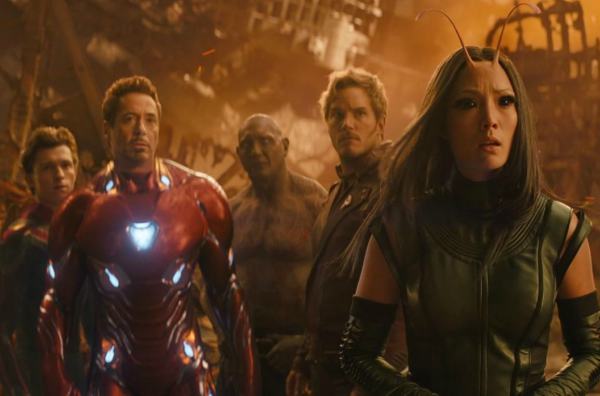 For those who’ve ever wanted to know what a movie that costs as much as the GDP of a small-to-mid sized country looks like, then Avengers: Infinity War is for you. Gargantuan almost to the point of parody, this ridiculously excessive enterprise will certainly preach to the converted, but general audiences who just want to sit back and be entertained by a big screen adventure that allows both its characters and the viewer room to breathe, will simply find this a case of overkill.

Combining a number of carry-over plot elements from other Marvel entries, particularly Thor: Ragnarok, Captain America: Civil War, Black Panther, and Guardians of the Galaxy Vol. 2, the focus of this highly connective tale is on Thanos (Josh Brolin), who continues his mission of obtaining the six infinity stones. If this intimidating villain manages to gather all six stones, he will become invincible, and will use his unlimited power to carry out his master plan, which is to destroy half the universe’s population.

As everyone is finding out who is who, where they’ve come from, and what future path they may be taking, the fate of the universe is in their hands, because if they fail, millions and millions of beings throughout the universe will perish.

Avengers: Infinity War is crushed beneath a relentless stream of exposition, a non-stop cavalcade of convoluted plot points and character cliff notes that seem to exist so it can create cross-promotional set-ups for numerous sequels and spin-offs (like Black Panther 2, Captain America 4, Guardians of the Galaxy 3, Spider-Man: Homecoming 2, etc.), and it’s the overly mechanical, unnecessary templates that leads to these films having such bloated running times. At 156 minutes, it is way overlong (by more than thirty minutes), and it is incredible that a film which approaches the three hour mark, doesn’t give its large gallery of characters the chance to develop or even enjoy a quiet moment together. All this verbalisation of plot and purpose becomes wearisome, and drains any chance of simply enjoying the explosive action and interaction between characters from various franchises.

Screenwriters Christopher Markus and Stephen McFeely, who penned the three superb Captain America films (but also wrote the awful Thor: The Dark World and the Michael Bay abomination Pain & Gain), attempt to pile everything into one cohesive narrative, but the sheer weight of tying all these separate Marvel stories together sabotages the organic building of one singular scenario, and throttles the excitement that admittedly pervades some of the protracted action sequences.

Directors Anthony and Joe Russo, who did such an impressive job on Captain America: The Winter Soldier (still the best entry in the Marvel Cinematic Universe) and Civil War, again show extreme confidence and technical skill in staging a multitude of large-scale action scenes, and never appear daunted by the complicated choreography that fills every inch of the frame. However, as the movie goes on, it starts to feel like it is nothing more than a succession of enormous set-pieces, weighed down by the aforementioned exposition that is being continually dispensed at the same time, and as such it all starts to fall into repetition.

The cast all acquit themselves well, despite the fact that many aren’t given the chance to shine, and give their characters an extra layer or two (Boseman being a notable example). Downey Jr. and Holland manage to amuse, as does Pratt and company, who are allowed to indulge in the kind of goofy humour that helped make the first Guardians of the Galaxy such an unexpected treat (the sequel was a dispiriting disappointment). Danai Gurira again does some scene stealing as Okoye, while Peter Dinklage (The Station Agent, In Bruges, Three Billboards Outside Ebbing, Missouri) nicely subverts his on-screen presence, although he will remind you of a certain Muppets character.

Technically the film is flawless, and it is astounding how much modern technology has advanced. I saw this at IMAX, and for any Marvel fan, this is most definitely the best way to see it. The first feature film to be entirely shot in the IMAX format, the images absolutely tower over you on the huge screen, and makes for an overwhelming experience.

Avengers: Infinity War will be met with open arms by its legion of comic book fans, and should easily surpass one billion dollars at the world-wide box-office. While undeniably well-crafted by a world-class crew, and overseen by two film-makers who are unmistakably talented, this now feels like carefully designed product, an expensive assembly line item that only feels complete when connected to other extravagant accessories, which will forever be produced by its supplier. The film does finish in an open-ended manner (Part Two is slated for release this time next year), and as usual, please make sure you stay right through the end credits.