Marvel superhero action directed and co-written by Ryan Coogler. Black Panther (2018) follows T’Challa (Chadwick Boseman) who, after the death of his father, the King of Wakanda, King T’Chaka (John Kani), returns home to the isolated, technologically advanced African nation to succeed to the throne and take his rightful place as king. However, T’Challa soon finds that he is challenged for the throne from factions within his own country. When two foes, Ulysses Klaue (Andy Serkis) and Erik Killmonger (Michael B. Jordan) conspire to destroy Wakanda, T’Challa’s mettle as king, and Black Panther, he is drawn into a formidable conflict that puts the fate of Wakanda and the entire world at risk. T’Challa must team up with CIA agent Everett K. Ross (Martin Freeman) and members of the Dora Milaje, Wakanda’s special forces, to prevent Wakanda from being dragged into a world war.

'In times of crisis the wise build bridges, while the foolish build barriers.' - T'Challa (Black Panther) Click To Tweet

Ulysses Klaue: Tell me something. What do you know about Wakanda?
Everett K. Ross: It’s a third world country. Textiles, shepherds, cool outfits.
Ulysses Klaue: All a front. Explorers have searched for it. Called it El Dorado. They looked for it in South America, but it was in Africa the whole time. I’m the only one whose seen it and made it out alive.
Ulysses Klaue: [starts laughing and looks into the two-way mirror across the room] Yeah, I can see you.
[behind the mirror in the next room we see T’Challa and Okoye watching them]

Everett K. Ross: You’re telling me that a king of a third world country runs around in a bulletproof cat suit?
Ulysses Klaue: Why don’t you ask him yourself, because he’s right outside.
Ulysses Klaue: [laugha and looks into the two-way mirror across the room where T’Challa and Okoye are watching them] Bingo.

Ulysses Klaue: [to Ross] Wakanda, explorers have searched for it for centuries, the Golden City. It’s a technological marvel.

Everett K. Ross: Well, you brought quite the entourage, do you have a mixtape coming out?
Ulysses Klaue: Oh, yeah. I’ll actually send you a link.

M’Baku: If you say one more word, I’ll feed you to my children! I’m kidding. We’re vegetarians.

Everett K. Ross: [as he wakes up]  Is this Wakanda?
Shuri: [sarcastically] No, it’s Kansas.

Shuri: Did he freeze?
Okoye: Like an antelope in headlights.

‘We must find a way to look after one another, as if we were one single tribe.' - T'Challa (Black Panther) Click To Tweet

Shuri: [referring to T’Challa’s sandals] What are those?

King T’Chaka: A man who has not prepared his children for his own death has failed as a father.

Zuri: The world is changing. Soon there will only be the conquered and the conquerors. You are a good man, with a good heart. And it’s hard for a good man to be a king.

Everett K. Ross: [to T’Challa] I have seen gods fly. I’ve seen men build weapons that I couldn’t even imagine. I’ve seen aliens drop from the sky. But I have never seen anything like this. How much more are you hiding?

'Just because something works doesn't mean that it cannot be improved.' - Shuri (Black Panther) Click To Tweet

Okoye: We are home.

T’Challa: If anyone found out what we truly are and what we possess, it could destroy the world. It is my duty to protect it.

Ramonda: [to T’Challa] My son, it is your time.

Nakia: [to T’Challa] You get to decide what kind of king you are going to be.

Shuri: [to T’Challa, referring to the Panther suit] It is lighter, completely bulletproof, and it absorbs energy for redistribution.

Erik Killmonger: I waited my entire life for this. The world’s going to start over, and I’m going to burn it all!

Erik Killmonger: Take me to the king.

Erik Killmonger: The world’s going to start over and I’m going to be on top.

'A man who has not prepared his children for his own death, has failed as a father.' - T'Chaka (Black Panther) Click To Tweet

T’Challa: What do you want?
Erik Killmonger: I want the throne.

Erik Killmonger: [to T’Challa] I want your weapons, your secrets. It’s all mine now.

Erik Killmonger: Is this your king!

T’Challa: What happens now determines what happens to the rest of the world.

Ulysses Klaue: Let’s have some fun.

T’Challa: I did not yield! And as you can see, I am not dead! The challenge continues!

T’Challa: Maybe we can still heal you.
Erik Killmonger: Why, so you can just lock me up? No. Just bury me in the ocean with my ancestors that jumped from the ships, because they knew death was better than bondage.

'You can't let your father's mistakes define who you are. You get to decide what kind of king you are going to be.' - Nakia (Black Panther) Click To Tweet

Shuri: When you said you would take me to California for the first time, I thought you meant Coachella or Disneyland. Why here?
T’Challa: This is where our father killed our uncle.

T’Challa: [mid-credits lines] Wakanda will no longer watch from the shadows. We can not. We must not. We will work to be an example of how we, as brothers and sisters on this earth, should treat each other. Now, more than ever, the illusions of division threaten our very existence. We all know the truth, more connects us than separates us. But in times of crisis the wise build bridges, while the foolish build barriers. We must find a way to look after one another, as if we were one single tribe. 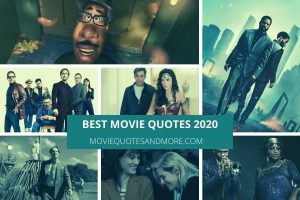