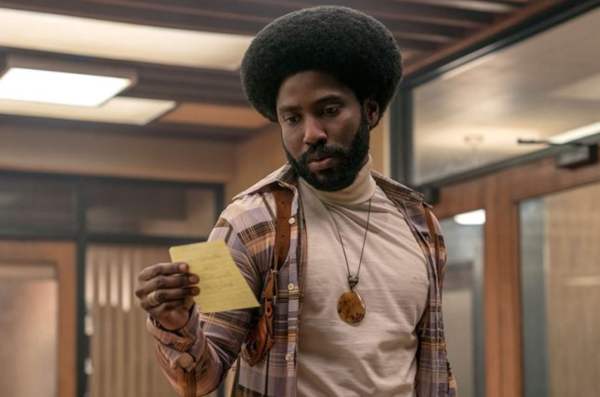 Crime comedy-drama directed by Spike Lee which is based on a true story and follows Ron Stallworth (John David Washington), an African-American police officer who successfully infiltrated the Ku Klux Klan in 1978 Colorado Springs, Colorado.

By pretending to be a white supremacist over the phone and sending a white officer, Flip Zimmerman (Adam Driver), in his place for in-person meetings, he was able to become the head of the local KKK chapter and sabotage their activities from within.

Mr. Turrentine: [to Stallworth] There’s never been a black cop in this city. Now, if we make you an officer, you will, in effect, be the Jackie Robinson of the Colorado Springs Police Force. And if you know anything about Jackie Robinson, you know he had to take a lot of, uh, uh, guff from his fellow teammates, the fans, other teams and the press.

Mr. Turrentine: Black Power also means that we must unite. We must unite, and we must organize to form a base to fight racism.

Kwame Ture: I just want to leave you, sisters and brothers, with these last words. If I am not for myself, who will be? If I am for myself alone, who am I? If not now, when? And if not you, who? We need an undying love for black people, wherever we may be. All power to all the people.

Chief Bridges: What was the room like?
Ron Stallworth: Folks were hanging on every word.
Jimmy Creek: Like a Baptist church on Christmas Sunday morning.

Felix Kendrickson: [to Zimmerman] You undercover or something? You ask too many questions.

Felix Kendrickson: My old man always told me good things come to those who wait.

What do you think of BlacKkKlansman quotes? Let us know what you think in the comments below as we’d love to know.