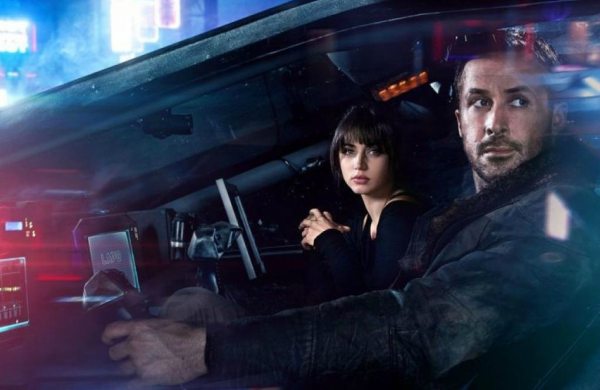 Story: Neo-noir sci-fi sequel directed by Denis Villeneuve, the story is set 30 years after the events of the first film, a new blade runner, LAPD Officer K (Ryan Gosling), unearths a long-buried secret that has the potential to plunge what’s left of society into chaos. K’s discovery leads him on a quest to find Rick Deckard (Harrison Ford), a former LAPD blade runner who has been missing for 30 years.

[first lines]
K: I hope you don’t mind me taking the liberty. I was careful not to drag in any dirt.
Sapper Morton: I don’t mind the dirt. I do mind unannounced visits.

K: I thought you might be able to help me with a case. Any idea where I could find him?
Sapper Morton: You’re police. Plan on taking me in?
K: I would much prefer that to the alternative.
[suddenly he goes to stab K who grabs his hand and they crash throw the wall]

K: I think I’ve found him.
Lieutenant Joshi: That’s not possible. If this gets out we’ve bought ourselves a war.

Lieutenant Joshi: There is an order to things. That’s what we do here. We keep order. This is what we do.

Lieutenant Joshi: The World is built in a wall that separates kind. Tell either side there’s no wall, you’ve bought a war. Or a slaughter.

[referring to Wallace]
Lieutenant Joshi: He’s got every gun in this city. I’ve got you.
K: We have to stop him

Lieutenant Joshi: We’re all just looking out for something real.

Niander Wallace: Every leap of civilization was built off the back of a disposable workforce. We lost our stomach for slaves unless engineered. But I can only make so many. That barren pasture empty and salted, right here. The dead space between the stars. And this, the seat that we must change for heaven. I cannot breed them. So help me, I have tried. We need more Replicants than can ever be assembled. Millions, so we can be trillions more. We could storm Eden and retake her. Tyrell’s final trick: Procreation. Perfected, then lost. But there is a child. Bring it to me.

Joi: Mere data makes a man. A and C and T and G. The alphabet of you. All from four symbols. I am only two: One and zero.
K: Half as much, but twice as elegant, sweetheart.

K: Why are you so good? What makes your memories so authentic?
Dr. Ana Stelline: Well, there’s a bit of every artist in their work.

Dr. Ana Stelline: Wallace needs my talent to maintain a stable product. I think it’s only kind. Replicants live such hard lives, made to do what we’d rather not. I can’t help your future, but I can give you good memories to think back on and smile.
K: It’s nice.
Dr. Ana Stelline: It’s better than nice. It feels authentic. And if you have authentic memories, you have real human responses. Wouldn’t you agree?

K: How can you tell the difference? Can you tell if something really happened?
Dr. Ana Stelline: They all think it’s about more detail. But that’s not how memory works. We recall with our feelings. Anything real should be a mess.

[referringto the dog]
K: Is he real?
Rick Deckard: I don’t know. Ask him.

K: What’s her name?
Rick Deckard: Rachael. Her name was Rachael.
K: What happened to the kid? Who put it in the orphanage? Was it you?
Rick Deckard: I was long gone by then.
K: You didn’t even meet your own kid? Why?
Rick Deckard: Because that was the plan. I showed them how to scramble the records, cover their tracks. Everyone had a part. Mine was to leave. Then the Blackout came, paved over everything. Couldn’t have found the child if I tried.
K: Did you want to?
Rick Deckard: Not really.
K: Why not?
Rick Deckard: Because we were being hunted. I didn’t want our child found taken apart, dissected. Sometimes, to love someone you, got to be a stranger. To strangers.

Lieutenant Joshi: This breaks the world!

Replicant: Where is he?!

Joi: I was told you’re special. You’re story isn’t over yet. There is still a page left.

K: [to Deckard] Tell me what you remember? Everything.

Lieutenant Joshi: [to K] He’s on your tail.

Freysa: Dying for the right cause. It’s the most human thing we can do.

Niander Wallace: All the courage in the world cannot alter fact.

Niander Wallace: I have wanted to meet you for so very long. You are a wonder to me, Mr. Deckard. I had the lock. I found the key.

Niander Wallace: Is it the same now, as then, the moment you met her? All these years you looked back on that day drunk on the memory of its perfection. How shiny her lips. How instant your connection. Did it never occur to you that’s why you were summoned in the first place? Designed to do nothing short of fall for her right then and there. All to make that single perfect specimen. That is, if you were designed. Love, or mathematical precision. Yes? No?
Rick Deckard: I know what’s real.

Niander Wallace: Pain reminds you the joy you felt was real. More joy, then.

Niander Wallace: [to Deckard] You do not know what pain is yet. You will learn.

[to Wallace; referring to the fake Rachael]
Rick Deckard: Her eyes were green.


What do you think of Blade Runner 2049 quotes? Let us know in the comments below as we’d love to know.