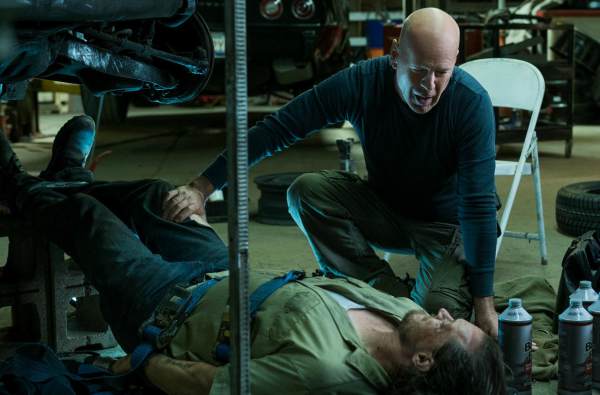 Moronic and tasteless in about equal measure, this dimwitted remake of the classic Charles Bronson hit is crafted by people who seem to have no idea how to approach the provocative subject and its themes, which sadly are as relevant today as they were when the novel was first published in 1972.

Bruce Willis plays renowned Chicago trauma surgeon Paul Kersey, a respected member of the community who enjoys a comfortable life with his wife Lucy (Elisabeth Shue), and teenage daughter Jordan (Camila Morrone). Paul, who seems a little unhappy that his only daughter will be leaving soon for university in New York, is ready to celebrate his birthday with his loved ones.

Called into work at the last minute, Paul has to cancel the party dinner, so Lucy and Jordan decide to bake a cake in an effort to cheer him up when he gets home. The two are then surprised by three masked burglars, who want whatever treasures are in the family safe. Things go from bad to worse, and Lucy is shot, while Jordan is knocked unconscious.

Kersey is terrified when he hears the news, and while Jordan survives the attack (but is in a coma), Lucy tragically dies from her gunshot wounds. Helping Paul through this tough time is his blue-collar brother Frank (Vincent D’Onofrio). The officers assigned to the case, detectives Raines (Dean Norris) and Jackson (Kimberly Elise), promise to catch these brutal home invaders, but as the weeks go by, it is obvious that the opposite will happen, and the crime will eventually be forgotten.

Seeing that the police won’t be able to deliver him justice, Paul decides to take the law into his own hands, as he wants to track down the assailants that have torn his family apart. After obtaining an unregistered handgun (in a highly convenient manner), and quickly learning how to use it to the pulsating sounds of AC/DC, this once law-abiding citizen now intends to clean up the streets of Chicago, one worthless punk at a time.

This Death Wish redux has been on the drawing board for quite some time. Originally set to star Sylvester Stallone in 2008, the production stalled until the Rocky star pulled out and Joe Carnahan took over as writer and director in 2012. Carnahan burst onto the movie scene in 2002 with the tough, compelling cop thriller Narc, with Jason Patric and Ray Liotta, and immediately seemed ready for the big time. But after an apparent falling out with star/producer Tom Cruise on the third Mission Impossible film, his career came to a halt just as quickly, and we wouldn’t see another movie from him until the Tarantino-inspired Smokin’ Aces in 2006. He then followed that up with the uneven The A-Team in 2010 and the supremely frustrating The Grey in 2011 (the first twenty-odd minutes of the latter are outstanding).

Despite his variable body of work, Carnahan’s gritty, no-holds-barred attitude seemed a perfect fit for Death Wish, and would have the smarts to transfer Brian Garfield’s novel and its controversial subject matter into a modern setting. Liam Neeson was going to star as Kersey, but once the studio wanted former box-office giant Bruce Willis as the lead, disagreements ensued and Carnahan ended up leaving the project. Unfortunately, almost nothing of Carnahan’s script has made it onto the big screen, with up to nine writers (including Scott Alexander and Larry Karaszewski) tinkering with or completely changing whatever was originally envisioned, and it’s quite bizarre that he retains sole screenplay credit.

Most of the changes however were made by screenwriter Dean Georgaris (Lara Croft Tomb Raider: The Cradle of Life, Paycheck) and new director Eli Roth (Hostel 1 and 2, The Green Inferno), whose sole intention appears to be to smother the whole scenario with a retro, 80’s-style mentality, rather than explore serious, socially relevant problems in an intelligent, thought provoking fashion. The attempt to cover the moral debate over vigilantism and gun control via a radio DJ geek chorus is shockingly inept and dangerously over-simplified, filled with clunky, heavy-handed speechifying rather than legitimate, thoughtful conversation. Do the Right Thing this isn’t.

Roth, who has specialised in making B grade horror fare that knowingly emulates his favourite films, may have technically chosen a different genre this time, but his sensibilities remain the same. Roth shows little interest in delving into the intriguing elements inherent in the material, or using the original source as a framework to then expand and investigate the reasons behind the horrific gun violence that still occurs across the U.S. Instead, we get his usual predilection for graphic torture and body trauma, but even though the violence is graphic, it is never impactful, coming across more as comic book nonsense rather than unflinching reality. More repellent is the worship and fetishism shown towards high-powered weaponry.

Kersey’s changing state of mind is also lost on Roth, who fails to connect the main character we were initially introduced to, with the dark, cold-blooded creature who now roams the streets. This ignorance reaches its zenith during a split screen sequence where we see both the hands of Kersey the life-saving surgeon, and the hands of Kersey the vigilante killer. All Roth seems worried about is showing how cool this guy masters his various ‘instruments’.

Death Wish even fails as a basic revenge pic, as the main villain remains off-screen for almost the entire movie, so when the inevitable final confrontation arrives, there is no dramatic pay-off whatsoever. In fact, it makes some of the Bronson sequels look good by comparison.

Willis continues his run of lifeless performances, showing no energy at all from start to finish; there’s little difference in his reaction to his daughter going to college, his wife dying from gunshot wounds, or lending money to his debt-ridden brother. It is dispiriting to see this once dynamic superstar just going through the motions, and if it is a case of having lost the love of acting, then maybe it’s time for him to retire. I want to remember Willis at his best, whether it be as John McClane in the first three Die Hard films, Joe Hallenbeck in The Last Boy Scout, Butch Coolidge in Pulp Fiction, Hartigan in Sin City, David Dunn in Unbreakable, Joe Blake in Bandits, James Cole in Twelve Monkeys, or the title hero in the misunderstood and under-rated Hudson Hawk. The list could go on.

Normally an over-the-top D’Onofrio performance would be an instant debit, but here it proves a noticeable asset, as the audience are at least seeing someone display some kind of emotion. Shue (Leaving Las Vegas) barely has enough screen time to make an impression, while Morrone comes across like a second-tier Maggie Grace. Norris (Breaking Bad TV series, Get the Gringo) and Elise (John Q, The Great Debaters) hit their marks, but nothing more is required of them.

It all finishes with a clumsy reference to the 1974 original, but you feel it should have ended a few minutes earlier, after the climactic mayhem has occurred. When Detective Raines is asked by his partner, with the case evidently wrapped up, if he is satisfied, “No” is the immediate answer. Raines then grabs a slice of pizza off a kitchen bench and follows up with “Now I’m satisfied”. The two cops grin at each other, and you suddenly expect the image to freeze, with TV-style credits and theme song playing over a subsequent selection of still highlights taken from the movie we have just sat through. That’s the type of film Death Wish is.

Paul Kersey: Have I told you I love you?
Jordan Kersey: Yes, dad. You’ve told me like a billion times.

911 Operator: 911, what is your emergency?
Lucy Kersey: There’s men, they’re breaking into my house. I think they’re here. No!

[as Paul tries to go into the emergency room to see his wife]
Dr. Chris Salgado: Doc, something’s happened. You can’t go in there.

Paul Kersey: I love my family, and when they needed me most I failed to protect them.

Detective Rains: I’m sorry, Dr. Kersey, nothing yet.
Paul Kersey: So there’s nothing that I can do, is that what you’re saying?
Detective Rains: You can have faith.
[referring to the photos of the unsolved cases on the wall]
Paul Kersey: How did faith work out for them.

Paul Kersey: [to Rains] The men who did it are out there. So there’s nothing you can do, is that what you’re saying?

Paul Kersey: The men who did it are out there. I’m going to hunt them down, one by one.

Ben: If a man really wants to protect what’s his, he has to do it for himself.

Paul Kersey: I want to buy a gun.

Sway Calloway: Everybody is watching this viral video of this guy in a hoodie they’re calling The Grim Reaper. He stopped a carjacking. Is he right for taking the law into his own hands? He’s become a folk hero.

Sway Calloway: Everybody’s watching this viral video. Is this dude right for taking the law into his own hands? Is he a hero or is it wrong?

Detective Rains: What about the shooter?
Detective Jackson: He looked like a white dude.

[Paul walks into a garage where Joe is working under a car]
Joe: We’re closed, pal.
Paul Kersey: You’re Joe, right?
Joe: Yeah.
[Paul suddenly hits the guy with a wrench]
Paul Kersey: Who killed my wife?! Who else was there?!
Joe: I don’t know anything else!
Paul Kersey: I believe you, Joe.
Joe: So you’re not going to kill me?
Paul Kersey: No, Jack is.
[Paul let’s go of the hook holding the car that Joe was working under, crushing Joe beneath it]

Punk Leader: Who are you?
Paul Kersey: Your last customer.
[Paul shoots him]

Frank Kersey: You’re not a cop!
Paul Kersey: Somebody has to do it!

Detective Jackson: They called him a guardian angel.

Victim: He saved my life.

Paul Kersey: Someone took my wife, everyone involved is going to pay.

Therapist: You look much better. You’re getting out, socializing?
Paul Kersey: Hmm, not so much.
Therapist: Well, whatever you’re doing it, keep it up.
Paul Kersey: [chuckles] Okay, I will.