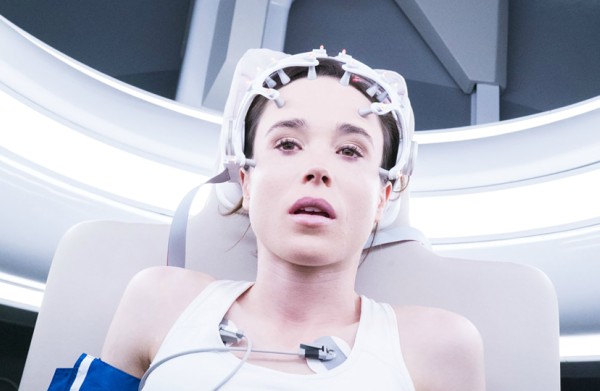 More and more often in the contemporary mainstream cinematography you come across feature calques and paraphrases, parasitic formations emasculated from originality, climate and sense, resorting to cheap tricks and feeding on the filmgoers’ sentiment. Flatliners (2017, N. A. Oplev), a remake of Joel Schumacher’s 1990 film of the same name, is not going to be in creditable circle of exceptions to the above rule in no way. This “Doctor Frankenstein’s monster”, enclosed with paper-stereotyped characters, is copying the most hackneyed motives and patterns of horror films with a wide range of distortions and cavalcade of obligatory jump scares.

Sentiments included are the title of the original plus the bit part of Kiefer Sutherland are the two best things which can be said about the new Flatliners. Composed from the same genre prefabricated elements like the Final Destination franchise, in the film of Niels Arden Oplev the death is omnipresent, insidious and treacherous and its powers are liberated when a medical student Courtney (Ellen Page) decides to discover and “scientifically” document what happens to a man after going to the “other side”. With a little help of friends and… the whole spectrum of pharmaceuticals, the protagonist undergoes the clinical death. But balancing on the edge of life and death playing God and dicing with nature quickly takes an unexpected, marked with paranormal effects turn.

But the fact is that there are some similarities between characters of Oplev’s film and the original, however in contrast with the original Flatliners, they are extremely unsympathetic and their actions are characterized by selfishness and vanity. What they experience while being on the “other side” has little to do with learning, intention to deepen human consciousness as to life after death. Desire to permanently bend limits of human cognition does not fulfil their scientific ambitions, but typical human self-interest. There is no method in this madness – there is an apparent purposefulness: calm and internal solace, insight into oneself, catharsis and overworking traumas as well as past misconducts coated over time. In Courtney’s case, guilty conscience will grow stronger after her beloved sister’s death, the demons of renunciation towards abandoned couple of years ago pregnant girlfriend will come after playboy Jaime (James Norton), and Sophia’s (Kiersey Clemons) lack of compensation for the harms caused to the school friend. Last but not least – Marlo’s (Nina Dobrev) guilty secrets dead, buried and… disinterred.

Oplev’s direction is predominantly plunged by poor Ben Ripley’s screenplay, trite and overfilled with genre clichés. In Flatliners we have got almost everything starting from ghoulish teenagers, creaky doors and floors, moving shower curtains in bathrooms to self-turning on radios and whole litany of hard dialogues and predictable jump scares unhooked in the typical textbook order.

It should be noted that the original Flatliners are also far from being called an outstanding work. However, in comparison with modern version, it emerges as real masterpiece. Schumacher is head and shoulder above Oplev not so much the climate corresponding to its genre, dirt and thickening atmosphere of terror by the minute, as to richer and more exquisite scenography and sensibility of presented characters.

If you are going to watch Flatliners, watch Schumacher’s version. Otherwise you can start to dig two holes. The first one will be used to bury your spare time, the second one – the film itself.

Courtney: Do you have plans tonight? Do you want to have fun with me later?
Jamie: Courtney Holmes, I am mildly surprised, but offer accepted.
Courtney: Midnight, basement, sublevel city.

Jamie: What’s going on?
Courtney: I would like you to stop my heart. You give it one minute, and then you bring me back.

Jamie: [to Courtney] Okay, now is the point where you say it’s all joke.

Courtney: What if we could document what happens to us after we die?
Ray: What are you talking about?
Courtney: I would like you to stop my heart. You give it one minute, and then you bring me back.

Courtney: What happens to us after we die? The only way to find out is to see for ourselves. We could document that experience.

Marlo: Did you see a white light?
Courtney: It was more like pure energy. It was like a feeling of intense power.

[referring to Courtney]
Marlo: How is she playing the piano now? It’s like her brain’s been rewired.
Jamie: I’m going next.

Jamie: Everyone I touch today, I’m going to heal!

Marlo: Three minutes.
Courtney: Jamie only did two.
Marlo: What I can say, I’m competitive.

Courtney: Seven minutes.
Jamie: No one’s ever come back from that.

Marlo: Something is happening to us.
Courtney: I think I’m going crazy.

Jamie: Maybe we opened a door.

Marlo: Something is coming for us.

Courtney: I should have told you this wasn’t about science or discovery.

Jamie: I did not know that the side effects would show up and start haunting us down.

Courtney: This was my fault.