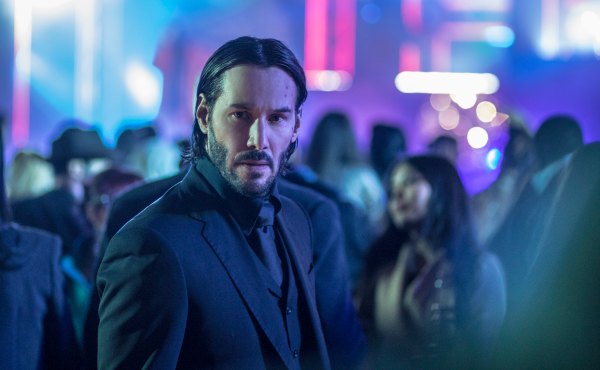 Action thriller sequel directed by Chad Stahelski and David Leitch, which follows legendary hitman John Wick (Keanu Reeves), who is forced back out of retirement by a former associate plotting to seize control of a shadowy international assassins’ guild.  Bound by a blood oath to help him, John travels to Rome where he squares off against some of the world’s deadliest killers.

Winston: [to Wick] The contract has gone international. You have no idea what’s coming.

Santino: If John Wick isn’t dead he soon will be.

The Bowler King: The man. The myth. The legend. John Wick. You’re not very good at retiring.
John Wick: I’m working on it.

[Wick gets his gun ready]
John Wick: Let’s go.
The Bowler King: Your descent into hell begins here, Mr. Wick. Earl will guide, do be careful on your way down. Oh, and remember, you owe me.
John Wick: You don’t want me owing you.

Winston: [to Wick] You stabbed the devil in the back. To him this isn’t vengeance, this is justice.

Winston: You stabbed the devil in the back and forced him back into the life that he had just left. You incinerated the priest’s temple. Burned it to the ground. Now he’s free of the marker, what do you think he’ll do? He had a glimpse of the other side and he embraced it. But you, Signor D’Antonio. took it away from him.