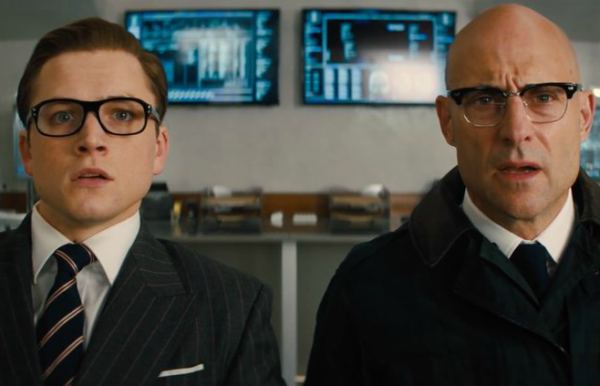 Action spy sequel directed by Matthew Vaughn, when the Kingsman headquarters is destroyed and the world held hostage by Poppy (Julianne Moore), a notorious criminal mastermind and member of the secret new world order group “The Golden Circle”, Eggsy (Taron Egerton), Merlin (Mark Strong), and Roxy (Sophie Cookson), set off on a journey that leads them to the discovery of an allied spy organization in the US called Statesman, dating back to the day they were both founded.

In an adventure that tests their strength and wits, the elite secret agents from both sides of the pond band together to battle a ruthless enemy and save the day, something that’s becoming a bit of a habit for Eggsy.

Just know that having something to lose is what makes life worth living. - Harry Hart (Kingsman: The Golden Circle) Click To Tweet

Harry Hart: [voice over] Eggsy, I saw in you what someone once saw in me, something that can’t be taught, the makings of a Kingsman. Being a “Kingsman” is more than the clothing we wear or the weapons we bag. It’s about willing to sacrifice for the greater good. I hope you’re ready for what comes next. It’s important.

Poppy: My name is Poppy Adams, CEO of the Golden Circle. We engage in an aggressive business strategy, invest in the latest technology, and take strict disciplinary action. I’m speaking to you today because our world leaders have let us all down, so we are coming out of the shadows and taking over. And to make sure no one gets in our way…

Poppy: My drugs are everywhere. They were never my thing, but here I am, running the biggest drug cartel in the world. The only downside is having to live in the middle of nowhere. You know, these ruins are technically undiscovered. I just added a few touches to remind me of home. I grew up on all that awesome ’50s nostalgia. Grease, American Graffiti, Happy Days. But I digress. The thing you need to understand is the hard work and ingenuity it took to achieve a global monopoly on the drug trade. And that’s all on me. Not to toot my own horn, I just think it’s really important for new recruits to understand the history of The Golden Circle.

[Eggsy and Merlin see Harry alive, with an eyepatch and about to shave]
Merlin: Oh, my God. Harry?!
Eggsy: Fuck me.

Eggsy: We’re from the Kingsman tailor shop in London. Maybe you’ve heard of us.

Poppy: Today marks the beginning of a new age. Wait, I’m going to show you.
[she presses a button and we see the Kingsman tailor shop explode]
Poppy: Say goodbye to the Kingsman.

Eggsy: We’ve kind of got a bit of a “save the world” situation here.

Eggsy: Galahad always said, “You’ve got to look at the bigger picture. Ask why as well as who.” So if someone wanted to take out Kingsman, then they’ve got to be planning something major.

Eggsy: Well, we all go our separate journeys, but ultimately we all arrive at the same destination.

Tequila: [to Eggsy] Welcome to Statesman.

Champ: [to Eggsy] As your American cousins we’ll be working side by side.

Whiskey: Manners maketh man.
Harry Hart: Do you know what that means?

Eggsy: I’m sorry.
Harry Hart: Don’t be. Just know that having something to lose is what makes life worth living. Now, let’s go and save your girl.
Eggsy: I missed you, Harry.

[Harry and Eggsy toast each other]
Harry Hart: Cheers.
Eggsy: Are you sure I don’t look like a dick?
Harry Hart: Look in the mirror.
[Eggsy goes over to the mirror]
Harry Hart: What do you see?
Eggsy: Someone who can’t believe what the fuck is going on.
Harry Hart: I see a man who is honorable, brave, loyal, who’s fulfilled his huge potential. A man who’s done something good with his life.
Eggsy: I owe you everything, Harry. Thank you.
Harry Hart: Don’t mention it. You ready?
Eggsy: Not a doubt in my mind.

[last lines]
Harry Hart: As one of our founding Kingsman once said, “This is not the end. It is not even the beginning of the end. But it is, perhaps, the end of the beginning.”

What are your favorite Kingsman: The Golden Circle quotes? Let us know in the comments below as we’d love to know.