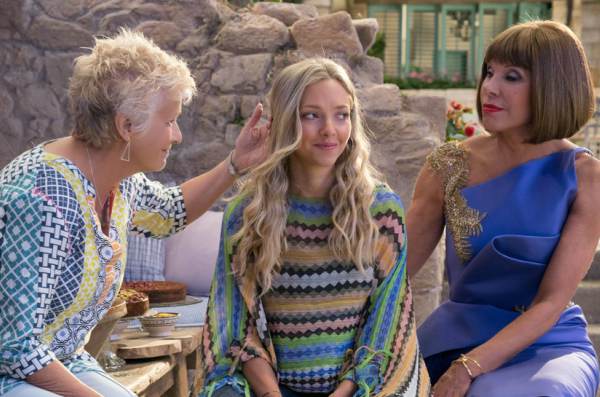 Romantic comedy musical sequel written and directed by Ol Parker, in which the story centers on Sophie (Amanda Seyfriend), who is now pregnant and running the Greek villa. As Tanya and Rosie (Christine Baranski and Julie Walters) come to visit her, Sophie admits she doubts whether she will be able to cope without Donna (Meryl Streep).

Tanya and Rosie reassure Sophie, along with Sam, Bill, and Harry’s (Pierce Brosnan, Stellan Skarsgård and Colin Firth) help. They begin telling Sophie the story of how the younger Donna (Lily James) made something of her life all on her own despite being underage and pregnant, without a mother to guide her, running the Greek villa that would soon be the place she would build a home for herself and her daughter.

[Donna is giving her graduation speech]
Young Donna: This place has taught me so much about friendship, loyalty, love, but most importantly, it’s taught me that the best things in life, the very best things happen unexpectedly.

[to Tanya and Rosie]
Sophie: I’m so glad you’re here. I’m pregnant, but I don’t know how to do this by myself.

Rosie: Come on. Let’s get this show on the road.

Rosie: [to Sophie] Your mother was the bravest person we ever met.
Tanya: Let me tell you how she did it all on her own.

Young Donna: Life is short, the world is wide. I want to make some memories.

[referring to Donna]
Young Tanya: She’s missing her man.
Young Rosie: Which one?

[as Bill tries to kiss her]
Young Donna: We only just met.
Young Bill: And you’re not that kind of girl?
Young Donna: Absolutely not. Usually.

Young Sam: This dress might look quite pretty on…
[Donna walks out wearing dungarees]
Young Donna: You really don’t know me at all, do you?

Young Donna: I don’t know what my future holds, but the world is wide and I want to make some memories.

Young Donna: There’s an island, Kalokairi. People used to think if you sailed on from there you’d fall off the edge of the world. That sounds like the place for me.

[referring to Bill]
Young Rosie: He is literally the handsomest man in the world.
[when they spot Sam]
Young Tanya: Except for this guy.
Young Rosie: What kind of island is this?

Young Donna: Turns out he’s engaged.
Young Rosie: I hate it when they do that.

Young Tanya: I just want to be upfront and say that I visually enjoy you.

[to Young Donna]
Young Harry: When you know, you know. When you fall, you fall. And when you’ve been defeated by love, you’re utterly defeated.

Tanya: Have him washed and brought to my tent.

Tanya: Be still my beating vagina.

Tanya: [to Sophie] Just tell me you didn’t invite your grandmother.
Rosie: Wicked Witch of the West.

Sophie: I have never felt closer to my mom. I’m in the exact same place that she was all those years ago, only this time we know who the father is.
Sky: You’re pregnant.
Sophie: Yeah, I am.


Sophie: I can do this. If I can just be as brave as my mom was back then.

[to Bill as he’s stamping his passport]
Rav: Time has been most cruel to you, sir.
[to Harry]
Rav: In your case, age becomes you as it does a tree, the wine, and cheese.

Bill: I was told you couldn’t come.
Harry: I’m a spontaneous person.
Bill: No, you’re not.
Harry: No, I’m not.

Young Donna: I was just really sad.
Young Bill: I know.
Young Donna: Men are pigs.
Young Bill: All of us.
[Donna turns to go back into her cabin, but turns back again]
Young Donna: Which is not to say I don’t like pigs. I do like them. I mean I wouldn’t want one as a pet.
Young Bill: Just get over here.

Rosie: [to Tanya] Typical, isn’t it. You wait twenty years for a dad and then three come along all at once.

Sophie: These are my dads.
Fernando: It takes three great men to create such a woman.

[to Bill, Harry and Sam]
Sophie: I never did ask you guys, what happened when you met my mother?

Sophie: You can’t tell anybody else about the baby yet, okay?
Sam: I just told Bill.
Bill: Yeah, and I told Harry.
Harry: And I told many, many people.

[to Rosie and Tanya, referring to Donna]
Sophie: She wasn’t scared. She could do it because wasn’t alone, she had me.

Ruby Sheridan: [to Sophie] I’ve decided to commit to being a “grandmother”.

Harry: All three of us are grandfathers, and that’s that.

Bill: [to Sophie] Look what you’ve done with the place.
Sky: She wanted to make her mum proud.
Harry: As if she hasn’t done that all her life.

Ruby Sheridan: You know, Soph, being a grudge holder makes you fat.

What do you think of Mamma Mia! Here We Go Again quotes? Let us know what you think in the comments below as we’d love to know.