Mary Poppins Returns Best Quotes – ‘Mary Poppins, it is wonderful to see you!’ 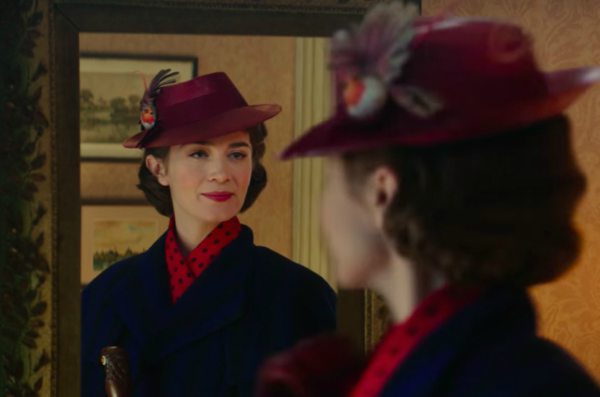 Disney’s musical fantasy sequel directed by Rob Marshall, in which the story is set in 1930s depression-era London and we follow a now-grown Jane and Michael Banks (Emily Mortimer and Ben Whishaw). Michael, his three children Annabel, John, and George (Pixie Davies, Nathanael Saleh and Joel Dawson), and the housekeeper, Ellen (Julie Walters) are now living in the house on Cherry Tree Lane.

After Michael suffers a personal loss, Mary Poppins (Emily Blunt) re-enters the lives of the Banks family. Through her unique magical skills, and with the aid of her friend optimistic street lamplighter Jack (Lin-Manuel Miranda) and her eccentric cousin, Topsy (Meryl Streep), she helps family rediscover the joy and wonder missing in their lives.

Jack: [singing] There’s a different point of view awaiting you, if you would just look up.

[as they are looking through their old things]
Michael Banks: I honestly can’t remember why we kept most of this stuff to begin with.
[referring to their kite]
Michael Banks: I mean, why on earth did we save this old broken thing?
Jane Banks: Don’t you remember that kite? We used to love flying that with mother and father.
Michael Banks: Well, it won’t fly anymore.
[he puts the kite in a box]
Michael Banks: Out it goes. No looking back.

[as he watches Mary Poppins fly down with the kite]
Jack: As I live and breathe.

Mary Poppins: My goodness, Annabel, what have you done to your clothes? You could grow a garden in that much soil.
[looks at John]
Mary Poppins: And, John, yes, just as filthy.

Jack: May I say, you look lovely, as always.
Mary Poppins: Do you really think so? Nice to see you, Jack.
Jack: Good to see you too, Mary Poppins.

Georgie Banks: I was flying a kite and it got caught on a nanny!
Jane Banks: Whatever are you talking about?
Georgie Banks: Come! Come, look!
[referring to their old kite he’d thrown out earlier]
Michael Banks: Wait, where did you get that kite?
Georgie Banks: I found it in the park. She kept it from blowing away.
[Mary Poppins enters through the front door]

Jane Banks: You came back. I thought we’d never see you again.
Michael Banks: It is wonderful to see you.
[looking at herself in the mirror]
Mary Poppins: Yes, it is, isn’t it?
[her mirror image continues to look at herself as she turns and walks off]

Jane Banks: What brings you here after all this time?
Mary Poppins: Same thing that brought me the first time. I’ve come to look after the Banks children.
Annabel Banks: Us?
Mary Poppins: Oh, yes, you too.

Annabel Banks: But we don’t need a nanny. Mother taught us to look after ourselves.
Mary Poppins: You did just misplace Georgie, I might point out.
John Banks: Only slightly. We got him back.
Annabel Banks: We can do anything a nanny can.
Georgie Banks: Mary Poppins flew here on a kite. You can’t do that, can you?

[as Georgie watches Mary Poppins to use her magic to bring her umbrellas and carpetbag to her]
Georgie Banks: How did you do that?
Mary Poppins: Do what?

Mary Poppins: “Nothing”. Such a useful word, isn’t it? It can mean anything and everything.

Annabel Banks: It’s just that…
Mary Poppins: You don’t require the services of a nanny.
John Banks: Well, we have grown up a good deal in the past year, after all.
Mary Poppins: Yes. Well, we’ll have to see what can be done about that.

[sinking herself into a bubble bath]
Mary Poppins: Off we go.

Mary Poppins: [singing] So, perhaps we’ve learnt when day is done, some stuff and nonsense could be fun!
Mary Poppins, Banks Children: [singing] Can you imagine that?

Jack: It’s a good thing you come along when you did, Mary Poppins.

Annabel Banks: But we can’t fix the carriage wheel. It isn’t possible.
Mary Poppins: Everything is possible. Even the impossible.

Shamus the Coachman: Now, where would we all like to go on this fine, fine day?
Mary Poppins: The Royal Doulton Music Hall, please.
John Banks: Where?
Georgie Banks: What’s that?
Mary Poppins: We’re on the brink of an adventure, children. Don’t spoil it with too many questions.

Annabel Banks: How on earth did she do that?
Jack: One thing you should know about Mary Poppins, she never explains anything.

Georgie Banks: What are you doing?
Wolf: Well, well, if it isn’t the boy who cracked the bowl. We’ve waited a long time for you Banks children to come and visit us, so we could pay a visit to your nursery.
Georgie Banks: But those are our things!
Wolf: Oh, not anymore, they aren’t.
[sees Gilly being taken away in the box]
Georgie Banks: Give Gillie back! He’s mine! My mother made him for me!

Georgie Banks: I miss mother.
Mary Poppins: Oh, listen to the three of you. You’re all worrying far too much. After all, you can’t lose what you’ve never lost.
Georgie Banks: I don’t understand.

[singing to the Banks children]
Mary Poppins: Nothing’s really left or lost without a trace. Nothing’s gone forever, only out of place.

Mary Poppins: The children and I are heading that way on an errand. We’ll stop by the bank afterwards.
Jack: I’ll give you a lift. My rounds are done.
Mary Poppins: Wonderful.
Jack: All aboard, everyone. Come on.
Annabel Banks: On the bicycle? But there are five of us. We can’t all fit.
John Banks: The weight on those wheels alone. Mary Poppins, how much do you weigh?
[Mary Poppins looks horrified]
Jack: Never you mind about that. It’s all a question of balance.

[as Mary Poppins and the children have boarded onto Jack’s bicycle]
Jane Banks: Are you sure this is quite safe?
Mary Poppins: Not in the slightest. Ready!

Mary Poppins: You see, when the world turns upside down, the best thing is to turn right along with it.

Mary Poppins: [singing] When you change the view from where you stood, the things you view will change for good.

Jack: Say, what’s with all the glum faces? Lost sixpence and found a penny?
Annabel Banks: We’ve made a mess of everything.
John Banks: Father’s furious with us.
Georgie Banks: And we can’t find our way home.
Jack: Lost, are you, Mary Poppins?
Mary Poppins: Hopelessly.
Jack: Well, now, I’m no expert, but if ever I lose my way, I just look for a little light to guide me.

John Banks: What’s a leerie?
Jack: Why, it’s what we lamplighters call ourselves, of course. Time to send up the call to arms. Leeries, trip the light to lead the way!

Michael Banks: Where on earth have you all been? I told you to bring them straight home. I’ve been worried sick!
Annabel Banks: We’re sorry we’re late, Father. It wasn’t Mary Poppins’ fault.
John Banks: We got lost in the fog.
Georgie Banks: Jack and the leeries led us down the frog and toad.
Mary Poppins: He means road.
Michael Banks: So you’ve been off filling the children’s heads with stuff and nonsense. I’ve heard quite enough. Come in at once!

[to the children]
Michael Banks: I know it’s been a hard year for our family, and I’ve done all I can to keep you all from worrying, but I can’t do this on my own. It’s too hard. I just, I’m barely holding it together as it is. I can’t even seem to remember my briefcase in the morning, and there’s no more time. We’re about to lose our home, and I can’t lose this house. I just can’t. I don’t know what to do. I’m sorry, I don’t know what to do.
[he starts to cry]
Michael Banks: Everything’s fallen to pieces since your mother… Haven’t we lost enough already?
Georgie Banks: We haven’t lost mother. Not really.

[Dawes enters Wilkins office]
Mr. Dawes Jr.: He has you there, Willie.
Wilkins: Uncle Dawes? What on earth are you doing here?
Mr. Dawes Jr.: A little bird told me…
[winks at the Parrot umbrella, which winks back at him]
Mr. Dawes Jr.: … that you’ve been trying to cheat the Banks family out of their shares in this bank.
Jack: That he has. We heard him.

Mr. Dawes Jr.: I also hear, you’ve been telling the whole of London that I’ve gone loony. The only loony thing I ever did was trust you to look after this bank!
Wilkins: You can’t be serious, I’ve nearly doubled the profits of this bank.
Mr. Dawes Jr.: Yes, by wringing it out of the customers pockets. Their trust in us built this bank. You’ve squandered every last bit of their goodwill. Well, Willie, I’m back, and you’re out. Gentlemen, would you show my nephew to the door, please?
Frye: Yes, sir, Mr. Dawes.
[Frye and Gooding try to take hold of Wilkins arms]
Wilkins: Get off! You’re not fit to run this bank!
[Wilkins walks out of the office]
Mr. Dawes Jr.: Oh, we’ll see about that!I may be circling the drain, but I got a few steps left in me.

[to the Banks children]
Mr. Dawes Jr.: I’d like to tell you a little story. Once upon a time, there was a man with a wooden leg…
[laughs to himself]
Mr. Dawes Jr.: That’s not it.

Michael Banks: Welcome home, everyone.
Jane Banks: It’s nice to be back, isn’t it?
Michael Banks: It is, it’s so nice. I never thought I’d feel this much joy and wonder ever again. I thought that door was closed to me forever.

Mary Poppins: It’s time.
[she picks up her bag and umbrella and floats away]

What do think of the Mary Poppins Returns quotes? Let us know what you think in the comments below as we’d love to know.