Home / Best Quotes / Mary Queen of Scots Best Quotes – ‘Your gifts will be your downfall.’ 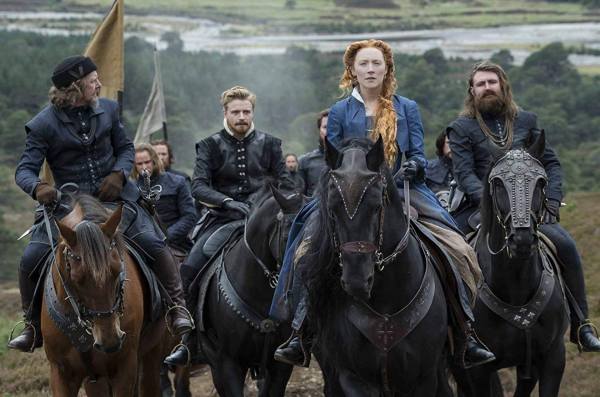 Historical bio-drama directed by Josie Rourke in her directorial debut. The story centers on the turbulent life of the charismatic Mary Stuart (Saoirse Ronan). Queen of France at 16 and widowed at 18, Mary defies pressure to remarry. Instead, she returns to her native Scotland to reclaim her rightful throne. But Scotland and England fall under the rule of the compelling Elizabeth I (Margot Robbie).

Each young Queen beholds her “sister” in fear and fascination. Rivals in power and in love, and female regents in a masculine world, the two must decide how to play the game of marriage versus independence. Determined to rule as much more than a figurehead, Mary asserts her claim to the English throne, threatening Elizabeth’s sovereignty. Betrayal, rebellion, and conspiracies within each court imperil both thrones, and change the course of history.

Queen Elizabeth I: You may tell Scotland that we wish to love the Stuarts as our kin. But they must love us in return.
William Cecil: Madam, if I may speak? While she is on this island, she must bow to you, not to Rome. Our Catholics must know that a papist will never again sit on the English throne.
Queen Elizabeth I: What would you suggest?
William Cecil: Kill her hope, and hopeless, she may return to the comfort of the continent.

[dictating a letter to Elizabeth]
Mary Stuart: We are two sisters bound by womanhood. Two princes on the same island. Ruling side by side, we must do so in harmony. And not through a treaty drafted by men lesser than ourselves. I wish us to make a treaty of two queens. I would acknowledge your rightful place on the English throne were you to name me your successor. I hope we might meet in person, that I might embrace you, and we might resolve our destinies.

John Knox: We have a scourge upon our land. Tis worse than pestilence and famine. Tis a woman with a crown. Who only pretends to worship Christ, when in truth she kneels before the Pope. We do not take instruction from Rome. We resist those who would tempt us with indulgences, deny those who worship luxury, respect not those who flaunt their excesses and whore themselves to wealth and the degradations of the flesh.

William Cecil: Mary will seek a marriage that strengthens her claim to your throne, and makes her children Catholics.
Queen Elizabeth I: What sayest our ambassador?
Lord Randolph: She feigns disinterest, madam, and informs me that the matter of choice in marriage is perhaps a matter best left to God. She is formidable, madam. We should marry her to someone loyal to our queen, someone you control.
[Elizabeth looks over to Dudley]

[letter to Mary]
Queen Elizabeth I: [voice over] We would delight in holding our sister’s hand in ours. Let us settle on a meeting place before the summer brings discomfort. Let our nations cherish each other, as we would. Two kingdoms united. Meanwhile, accept this portrait as a sign of gratitude for yours. And please accept this suitor, who presents both his love and mine, the Earl of Leicester, Lord Robert Dudley.

Lord Randolph: England wishes no more bloodshed. Being from France yourself, you must understand.
Mary Stuart: You may tell my sister that we pray for swift peace, that we may meet soon.
Lord Randolph: I will tell her at once.

Mary Stuart: [to Randolph] It is enough my own lords treat me as though I’m but a girl. I will not be treated as such by Elizabeth. I will be the woman she is not. I shall produce an heir, unlike her barren self.

Mary Stuart: [to Dudley] Rise and prepare yourself. Elizabeth has funded a rebellion.

Mary Stuart: Are you afraid, Henry?
Lord Darnley: No.
Mary Stuart: Good. Because our swords are not just for show.

James, Earl of Moray: There’s no appetite for war.
John Knox: Then let us stir an appetite.

William Cecil: If you grant her succession, we are rewarding her disobedience.
Queen Elizabeth I: What disobedience? She is not our subject.
Lord Randolph: And yet you would make us hers.
Queen Elizabeth I: What have you produced in all your travels between our kingdoms? Discord? War? Death? And now you have the boldness to doubt my judgment? You had better question yours.
Lord Randolph: I regret that you perceive me as a failure.

William Cecil: We serve you fully, with all our hearts. Any one of us would gladly die for you, but Mary is our foe and a Catholic.
Queen Elizabeth I: She is only your queen if I should not produce an heir.
William Cecil: And will you, madam? For you have given us little hope so far.
Queen Elizabeth I: Despite your every effort, she has prevailed. She has proven herself, in fact, far more capable than my own privy council! Should I die before my time, we could do worse than to place her on the throne of England.

Mary Stuart: I shall meet force with force.
Lord Maitland: People believe you are a traitor and a whore. What army can defeat an entire nation turned against its queen? They would sooner parade your head on a pike than bow before a harlot. I for one would gladly hold high that pike.
James, Earl of Moray: Well, he is right. You cannot raise an army.
Mary Stuart: Many times you have said I cannot do what I have done!
Lord Maitland: Then we are finished here.

Mary Stuart: England does not look so different from Scotland.
Man: Aye, they are sisters.

Mary Stuart: [to Elizabeth] How did it come to this?

Queen Elizabeth I: [voice over] Sister, evidence has been presented to me, written in your hand. It shows that you have conspired with Catholic forces against my life. Whether these letters are in your hand or not, I must act. I wish I could speak these words to you directly, but they exist only in my mind, as both a prayer and a penance. I hope that God will hear them. Believe me when I tell you how it ages me to bear such a burden, ordering to death the only other woman who knows what it means to rule as a queen in this land.

Queen Elizabeth I: [voice over] You were right when we spoke a half lifetime ago. You said the day would come. And that day has come. I regret not doing then what I do now, so that I could have spared you so many years of imprisonment and misery. If you would lay eyes upon me now, you would not recognize me. I have relinquished all sense of self to the throne which rules my every word and action. But when I think of you, I see not an aged woman, but rather the young, resplendent queen whose portrait I first gazed upon five and twenty years ago, and whose beauty shone so brightly when we met, despite her despair. I know God’s arms will accept you in that likeness, as the young, fierce queen who I have always loved and admired. May your soul have pity on mine.

Robert Beale: By order of our sovereign Elizabeth Queen of England, Wales and Ireland; Overlord of Scotland; certified by her privy council and Parliament, Mary Stuart is condemned to death, this day, February the 8th, the year of our Lord 1587.

[as Mary is about to be executed at the scaffold, she reveals herself wearing a bright red dress]
Nobleman: She thinks herself a martyr.

[last lines; as she’s about to be executed]
Mary Stuart: James, my only son. I pray that with your life you will succeed where I could not, and for one which I am about to give my life. In my end is my beginning. I shall be watching you from Heaven as your crown one day unites two kingdoms. And we shall have peace.


What do you think of Mary Queen of Scots quotes? Let us know what you think in the comments below as we’d love to know.