Home / Best Quotes / Sorry to Bother You Best Quotes – ‘I’m doing this and I’m really good at it.’ 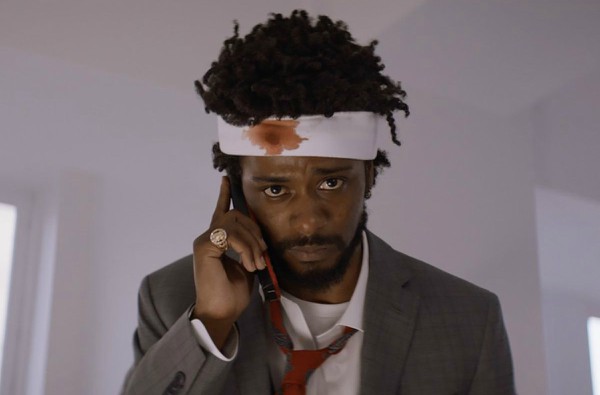 Sci-fi fantasy comedy directed and written by Boots Riley, in his directorial debut. The story is set in an alternate present-day and follows Cassius Green (Lakeith Stanfield), a telemarketer who finds out that by using his “white voice” to speak (voiced by David Cross), he find success at his job.

Armed with this new skill, Cassius becomes a rising star at his company, much to the chagrin of his activist girlfriend, Detroit (Tessa Thompson). At the top of the corporate ladder, Cassius also encounters the coke-snorting CEO, Steve Lift (Armie Hammer), who has a few disturbing secrets of his own.

'If you get shown a problem, but have no idea how to control it, then you just decide to get used to the problem.' - Squeeze (Sorry to Bother You) Click To Tweet

Cassius’s Boss: That is intriguing.

Cassius’s Boss: [to Cassius] This is telemarketing. Stick to the script.

Langston: Let me give you a tip. If you want to make some money here, use your white voice.
Cassius ‘Cash’ Green: My white voice.
Langston: I’m not talking about Will Smith. White, like this young fella.
[he suddenly starts speaking in his white voice]
Langston: Hey, Mr. Kramer. This is Langston from Regal View.

[we see Cassius making calls at work using his white voice]
Cassius ‘Cash’ Green: As always, we’ll be getting that out to you right away.

Cassius’s Boss: [to Cassius] You’re doing so good with the voice thing.

[Cassius using his white voice]
Cassius ‘Cash’ Green: Was that visa or mastercard?

Cassius’s Boss: [to Cassius] You’re going upstairs, my compadre. They even have their own elevator.

Cassius ‘Cash’ Green: I got promoted from a Power Caller.
Detroit: What do they sell?

[to Cassius; referring to the upper level telemarketer]
Langston: They’re not selling what we’re selling.

Cassius ‘Cash’ Green: No. well there’s no amount of money that will make me do that.

Mr. Blank: Here’s the starting salary.
Cassius ‘Cash’ Green: Man, I’m going to have to get me some new suits.

Salvador: You don’t have to sell you.
Cassius ‘Cash’ Green: I’m not selling out.

Detroit: This is morally emaciating. I can’t ride with you.
Cassius ‘Cash’ Green: I’m doing this and I’m really good at it.

Detroit: [to Cassius] It’s just the old you was way more interested.

[in his white voice]
Cassius ‘Cash’ Green: Some for the homies, and some for me!

Steve Lift: [to Cassius] You are rolling with the big dogs now.

Detroit: We will have a transformative experience.

Steve Lift: [to Cassius] The reason you’re not high is because your adrenaline is pumping so hard right now, that to be perfectly honest you’re starting to harsh both of our mellows. Okay? So, sit down and just take a breath, man. It’s fucking adrenaline.

Squeeze: [to Cassius] If you get shown a problem, but have no idea how to control it, then you just decide to get used to the problem.

Steve Lift: If your beautiful perversions don’t shut the fuck up, I will turn you all into glue!

Cassius Green: This place is fucking nuts, man.
Steve Lift: Thank you. I will accept your backhanded compliment.

What do you think of the Sorry to Bother You quotes? Let us know what you think in the comments below as we’d love to know.