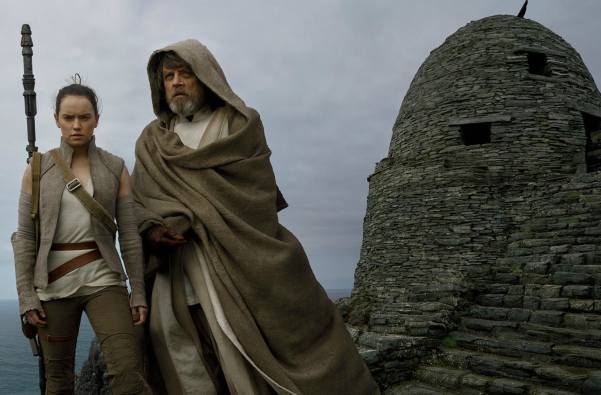 Space opera fantasy sequel directed and written by Rian Johnson in which we follow Luke Skywalker (Mark Hamill), who has been living in peaceful and solitary existence, get his life upended by Rey (Daisy Ridley) and is unwillingly attempted to guide Rey in the ways of the force. Meanwhile, Kylo Ren (Adam Driver) leads the First Order in an all-out assault against (Leia Carrie Fisher) and the Resistance for supremacy of the galaxy.

Snoke: When I found you I saw raw untamed power, and beyond that, something truly special.

Snoke: You have too much of your father’s heart in you, young Solo.
Kylo Ren: I killed Han Solo. When the moment came, I didn’t hesitate.
Snoke: And look at you, the deed split your spirit to the bone. You were unbalanced, bested by a girl who had never held a lightsaber! You failed! Skywalker lives. The seed of the Jedi Order lives. And as long as it does, hope lives in the galaxy. I thought you would be the one to snuff it out. Alas, you’re no Vader. You’re just a child in a mask.

Luke Skywalker: I failed. Because I was Luke Skywalker. Jedi Master. A legend.
Rey: The galaxy may need a legend. I need someone to show me my place in all this. And you didn’t fail Kylo. Kylo failed you. I won’t.

Luke Skywalker: Lesson one, sit here, legs crossed. The Force is not a power you have. It’s not about lifting rocks. It’s the energy between all things, a tension, a balance, that binds the universe together.
Rey: Okay. But what is it?
Luke Skywalker: Close your eyes. Breathe. Now, reach out.
[Rey closes her eyes and reaches out and Luke starts tickling her hand with a leaf]
Rey: I feel something.
Luke Skywalker: You feel it?
Rey: Yes, I feel it.
Luke Skywalker: That’s the Force.
Rey: Really? Wow, it must be really strong with you. I’ve never felt any…
[suddenly Luke strikes Rey’s had]
Rey: Ow!

[after Rey comes back from using the Force]
Luke Skywalker: You went straight to the dark.
Rey: That place was trying to show me something.
Luke Skywalker: It offered something you needed. And you didn’t even try to stop yourself.
Rey: But I didn’t see you. Nothing from you. You’ve closed yourself off from the Force. Of course you have.
Luke Skywalker: I’ve seen this raw strength only once before, in Ben Solo. It didn’t scare me enough then. It does now.

Rey: I thought I’d find answers here. I was wrong. I’ve never felt so alone.
Kylo Ren: You’re not alone.
Rey: Neither are you.

[referring to Kylo]
Rey: You failed him by thinking his choice was made. It wasn’t. There’s still conflict in him. If he were turned from the dark side, that could shift the tide. This could be how we win.
Luke Skywalker: This is not going to go the way you think.
Rey: It is. Just now when we touched hands, I saw his future, as solid as I’m seeing you. If I go to him, Ben Solo will turn.
Luke Skywalker: Rey, don’t do this.
Rey: Then he’s our last hope.

[Yoda’s ghost appears]
Luke Skywalker: Master Yoda.
Yoda: Young Skywalker.
Luke Skywalker: I’m ending all of this. The tree, the text, the Jedi. I’m going to burn it down.
Yoda: Hmm.
[Yoda uses the Force to bring lightning to burn down the tree and the Jedi texts]
Yoda: Ah, Skywalker. Missed you, have I.
Luke Skywalker: So it is time for the Jedi Order to end.
Yoda: Time it is for you to look past a pile of old books, hmm?
Luke Skywalker: The sacred Jedi texts.
Yoda: Oh. Read them, have you?
Luke Skywalker: Well, I…
Yoda: Page-turners they were not. Yes, yes, yes. Wisdom they held, but that library contained nothing that the girl Rey does not already possess. Skywalker, still looking to the horizon. Never here, now, hmm? The need in front of your nose. Hmm?
Luke Skywalker: I was weak. Unwise.
Yoda: Lost Ben Solo, you did. Lose Rey, we must not.
Luke Skywalker: I can’t be what she needs me to be.
Yoda: Heeded my words not, did you? Pass on what you have learned. Strength, mastery. But weakness, folly, failure also. Yes, failure most of all. The greatest teacher, failure is. Luke, we are what they grow beyond. That is the true burden of all masters.

Kylo Ren: Let the past die. Kill it, if you have to. That’s the only way to become what you were meant to be.

Poe Dameron: You must have a thousand questions.
Finn: Where’s Rey?

Snoke: Darkness rises and light to meet it.

Kylo Ren: Do you want to know the truth about your parents? Or have you always known and you’ve just hidden it away? You know the truth. Say it. Say it.
Rey: They were nobody.
Kylo Ren: They were filthy junk traders who sold you off for drinking money. They’re dead in a pauper’s grave in the Jakku desert. You have no place in this story. You come from nothing. You’re nothing. But not to me.
Join me.

Finn: I was raised to fight. For the first time I have something to fight for.

Vice Admiral Holdo: When I served under Leia, she would say, hope is like the sun. If you only believe in it when you can see it, you’ll never make it through the night.

Finn: Why would you do that? Huh? I was almost there. Why would you stop me?
Rose Tico: I saved you, dummy. That’s how we’re going to win. Not fighting what we hate, but saving what we love.
[she kisses Finn]

Kylo Ren: Did you come back to say you forgive me? To save my soul?
Luke Skywalker: No.

[as they watch Luke facing Kylo Ren]
Poe Dameron: He’s doing this for a reason. He’s stalling so we can escape.
Finn: Escape? He’s one man against an army. We have to help him, we have to fight.
Poe Dameron: No, no. We are the spark that’ll light the fire that’ll burn the First Order down. Skywalker’s doing this so we can survive.

Have you seen Star Wars: The Last Jedi?! What are your favorite quotes? Let us know what you think in the comments below as we’d love to know.