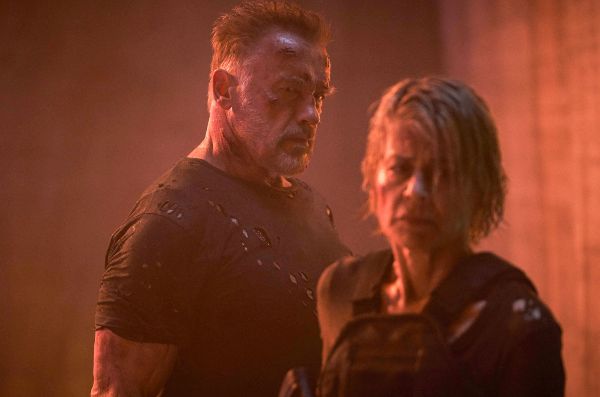 “The future’s not set. There’s no fate but what we make for ourselves.”
This might be the single greatest contribution from Edward Furlong’s John Connor in T2: Judgment Day, along with some good comic relief between the boy and his Terminator, Arnold Schwarzenegger.

SPOILERS for Dark Fate ahead!

Not to worry, Edward Furlong is nowhere to be found in the third chapter of this classic Terminator trilogy, well not really anyways.

Wait… hold the phone. ‘Did he just say, THIRD chapter?’

In case the Terminator timeline over the years hasn’t been confusing enough, Dark Fate is a sequel that goes back to its roots, directly following up the events of both The Terminator (1984) and T2: Judgment Day (1991). This is a bold direction from Tim Miller, who is no stranger to franchise films with his only other directing credit coming from Deadpool in 2016; as this has become a somewhat fragile franchise that easily could have had the nail put in the coffin if he hadn’t delivered such a great trilogy capper. Thankfully one of film’s screenwriters was David S. Goyer (Blade, Batman Begins, Man of Steel), who contributed to a script that was meticulously thought-out and well-paced, and delivered on a story that felt like a natural progression from the first two installments.

The other exciting factors that bode well for a revitalized Terminator franchise are the return of James Cameron as a producer, as well as familiar faces such as Linda Hamilton and Arnold Schwarzenegger. They are incredible supports, but the main draw is in the newest generation of characters. The film opens with a badass introduction to Grace (fiercely portrayed by Mackenzie Davis), and you are quickly introduced to a Mexican family to where the young woman-of-the-house is revealed to be Dani Ramos (played by Natalia Reyes), and the latest target for termination. Another mysterious figure enters the scene (Gabriel Luna, by way of time portal – in broad daylight no less!) and begins looking for Dani, starting at her family home and continuing on to the factory where she works. Ironically, and fitting with the overarching theme in the Terminator series, the factory seems to be automating which is impacting the labor force, and Dani’s brother Diego’s job is in jeopardy when they arrive to work (he looks to be replaced by a machine). In a true show of character, Dani demands to meet with the manager instead and tells Diego to take her spot.

There is a much bigger game afoot here, however, as two ‘terminators’ converge on the target’s location not unlike the classic action/horror films that preceded it. Arguably, these films become more action and less horror with each new iteration as the cat is out of the bag, but there’s definitely some cool body horror on display in Terminator: Dark Fate. The killer is menacing and comes with some new features that are both awe-inspiring while also seeming like natural upgrades as technology improves over time. There are familiar car/truck chases, and one super-soldier protecting the target from a Terminator seems par for the course, but then the audience is treated with a pleasant surprise in the form of a tie-in to the Terminator films that started it all. Linda Hamilton (reprising as Sarah Connor) explodes onto the scene as a self-sufficient hunter/killer, arriving at precisely the right moment just when it seems that the Terminator has their number. Grace and Dani take the opportunity to continue the wild goose chase, but it is revealed that Grace is badly in need of medication if she is to continue. Dani chooses to help, and eventually Sarah Connor (the original hero of the franchise) catches up to aid in their survival.

To make things slightly less confusing for the audience, Sarah explains that in the 20+ years since Judgment Day, she has been receiving mysterious texts that supply her with the date and time of the next Terminator wave, and she has made it her mission to wipe them out (“All of them.” – Sorry, I couldn’t ‘resist’, what with Star Wars: Episode IX – The Rise of Skywalker dropping this week). The plot thickens when they turn to their mysterious benefactor for help and it is revealed to be Arnold himself, a T-800 (original model 101) who has been hiding in plain sight while raising a family that he had saved and is now caring for. With Sarah’s complicated past with Terminator’s she is reluctant to trust ‘Carl’, as she refuses to call him by name. The action moves along quite briskly, as there is always a sense of danger that the new REV-9 model terminator is hot on their tail. The third act set piece involves some aerial stunts, and of course as with its predecessors winds up at a facility (this time it’s the power plant at a dam) for the final showdown. It takes the combined efforts of Grace, Dani, Sarah, and Carl to take on the deadliest terminator to date, and it’s never certain as to whether it will be enough.

The theme at play here is as relevant as it was in 1984 if not more so: this idea that mankind is capable of creating such devastating tools of war that inevitably will be our downfall. Specifically the notion that true A.I. (Artificial Intelligence), if achieved, could potentially serve as our replacement as the dominant species. Some Terminator purists will likely complain about some of the creative choices, but the important message is not necessarily that there is one savior for the human race, but that human beings have a choice; and they are not necessarily bound to a ‘dark fate’ even if it were collectively their choices that led them down this path. Ultimately there is no fate but what you make, and that is a lesson that John Connor (the original ‘savior’) so aptly taught us in the previous film. To better paint this picture, the ideology extended to machines, to where the T-800 that was initially designed to kill humans, is found to have developed an artificial conscience, and is able to make better choices as a result.

Terminator: Dark Fate concludes a very classic tale about one woman’s journey through a sci-fi horror story, a cautionary tale from a prophetic point of view. There are many other characters introduced as timelines get fused and futures are altered, but the ongoing threat to humanity remains. It is a chilling metaphor for what can and will go wrong in civilization if human beings don’t collectively start making smarter choices.