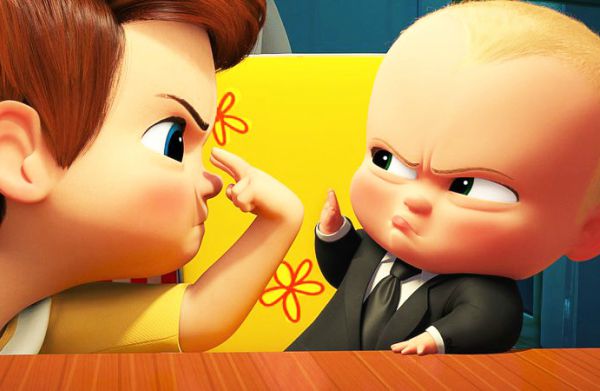 2017 has been a year which has and will continue to bring a number of fair films as well as great films. This is a year that has given the world a finalization for several movie trilogies, especially animated ones. War for the Planet of the Apes wraps up the renewed saga of Caesar that began back in 2011. The third installments of two well-loved animated movie series were also slotted for theatrical release this year. Disney’s Cars 3 puts Lightning McQueen into a near-retirement stage, and Universal’s Despicable Me 3 introduces Gru to his long lost brother Dru. In addition to these animated movies, Dreamworks Animation released an all-new original feature film earlier this year, The Boss Baby.

The Boss Baby was directed by Tom McGraph and starred the voice talents of Alec Baldwin, Steve Buscemi, Lisa Kudrow, Jimmy Kimmel, and others. This was not the first time McGraph and Baldwin had worked together at Dreamworks. In Dreamworks Animation’s Madagascar: Escape 2 Africa (2008), Baldwin supplied the voice of the main villain, a black-maned and black-hearted lion named Makunga who was hungry for the power associated with leadership.

Tom McGraph, as in all the Madagascar movies, voiced Skipper, the head of the group of militaristic penguins. McGraph, who was one of Madagascar 2’s directors, also starred in The Penguins of Madagascar (2014) with Benedict Cumberbatch. The Boss Baby was the first big feature film for which he was the sole director. McGraph also provided the voice in the minor role of the female chef on TV who resembled Julia Child in one sequence.

Like most of my movie reviews, this one is full of plot spoilers. The Boss Baby was a fair movie, and I will not try to persuade you in any specific direction. The movie is the story of Tim Templeton, an imaginative boy of the age of seven, and the Boss Baby, an infant who informs young Templeton that he was special when he came into the world and was employed by Baby Corp. Babies are depicted as an industry. This is another one of those movies in which the kid ponders the age-old question asked by children: “Where do babies come from?” An inquiry which never really settled in the film the logical, traditional way.

Even though the film can be ridiculously childish (as it should be as it is geared toward a juvenile audience), some rather crass and/or adult-themed comments are made by several of the characters. Religious remarks were also present throughout. For instance, Tim, who can communicate with the Boss Baby since he speaks perfect English, asks the baby if he is the baby Jesus. Boss Baby claims, “Yes, I am the baby Jesus,” but then quickly recants the statement. Later there is brief talk of a “Godless witch” and “cannibalism” in a story before the kids’ bedtime.

Many of the young children watching this movie are not going to fully comprehend half of the characters’ dialogue like almost all kids’ movies these days. Although, coming from the standpoint of an older individual’s viewing, a few of the Boss Baby’s business-related lines were slightly funny such as “Here’s your severance package!” as he slices a rope to which a pirate is clinging, suspended high in the air.

At first, Tim becomes jealous of the Boss Baby upon his arrival at the home since the baby very quickly receives the majority of his parents’ time and attention. Tim uncovers the secret that the new addition to the family is not who he pretends to be. He discovers the baby with anger management issues who dresses up in a suit and tie is, in fact, a baby with the mind and voice of a full grown man, and more specifically a businessman. Initially, the Boss Baby tells Timothy Templeton to just stay out of his way. Boss Baby calls together a meeting of five of the other neighborhood infants. To all the parents it seems like just a cute play date, but Tim knows it is a conspiracy of some sort and investigates.

Eventually, a fight ensues between Tim and the babies, ending in Tim’s being grounded after nearly launching his baby brother out a window. In the confinement to his bedroom, Tim is visited by the Boss Baby who explains his presence and asks for Templeton’s assistance. Boss Baby is on an urgent mission to discover more about a new puppy which is going to be released by Puppy Co., a company that Mr. and Mrs. Templeton are both employed at.

The baby also explains why his task is important, namely because puppies are stealing the love that belongs to babies and because Boss Baby is expecting a promotion to upper management if all goes well. In addition, the Boss Baby tells Tim that if he aids him in completing the mission he will leave Tim and his parents forever after. At this point, Tim agrees to help just to get rid of the Boss Baby. But in order to make it work, the two actually have to act like they love each other. In the end of their intrepid adventure in which they defeat Francis Francis, the evil owner of Puppy Co. (a great villainous character), the two find that they actually enjoyed spending time with one another and that they learned from each other. It turns out that Boss Baby returns to the Templetons after leaving and getting the promotion to become part of a family.

The movie has plenty of animated butts. But it also has numerous references to the Lord of the Rings films which I found interesting. Making well over $300 million in profit, The Boss Baby seems to have been a hit. A sequel, The Boss Baby 2, is to be released in 2021.

“On a quest, the clear path is never the right one.”