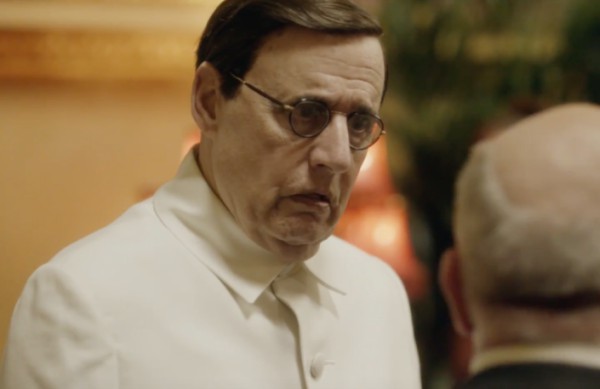 Period comedy directed and co-written by The Death of Stalin and follows the sudden demise of Soviet dictator Joseph Stalin (Adrian McLoughlin) in 1953, and the chaotic fallout that followed in the Communist Party apparat, as Stalin’s underlings vie for power, and their lives..

[after Stalin has collapsed]
Nikita Khrushchev: I propose we call a doctor.
Kaganovich: All the best doctors are in the gulag, or dead.


Georgy Malenkov: I can’t remember who’s alive and who isn’t.

[referring to the Stalin lookalikes]
Guard: Lookalikes. I think their contracts up.

Nikita Khrushchev: We should get Stalin’s children here.

[referring to the doctors gathered for Stalin]
Svetlana Stalin: They look like mental patients.

Vasily Stalin: I want to make a speech at my father’s funeral.
Nikita Khrushchev: And I want to fuck Grace Kelly.

Vasily Stalin: I want to make a speech at my father’s funeral.
Georgy Malenkov: Um, no, uh, problem.
Nikita Khrushchev: Uh, technically, yes, but practically…
Georgy Malenkov: When I said no problem, what I meant was, “No… problem.”
[everyone looks confused.]
Georgy Malenkov: Ignore me.

Vyacheslav Molotov: Stalin would have wanted the committee as one.

Kaganovich: I’ve had nightmares that made more sense than this.

Nikita Khrushchev: We need a change.
Lavrentiy Beria: Well, let’s see if you can mobilize first. Seems to be me.
Georgy Zhukov: Sneaky little shit.

Nikita Khrushchev: The race has started. We need to start putting together a plan.
Kaganovich: How can you run and plot at the same time?

Georgy Malenkov: What are you doing?
Nikita Khrushchev: I’ve been picking out funeral cushions with slim Hitler over there.

Georgy Malenkov: I have no idea what is going on.

Nikita Khrushchev: I’m the peacemaker and I’ll fuck over anyone who gets in my way.

Vasily Stalin: I know the drill. Smile, shake hands, and try not to call them a cunt.

Vasily Stalin: Come on! Play better, you cratering fannies! Get it! Give it! Hit it!

[to the guard]
Lavrentiy Beria: Shoot her before him, but make sure he sees it. Kill him then dump him in the pulpit, then I leave the rest up to you.

Nikita Khrushchev: We have to act! I really need your help.
Georgy Zhukov: I’m going to have to report this conversation. Threatening to do harm, or obstructing a member of the Presidium in the process of, look at your fucking face
[starting laughing]
Georgy Zhukov: I took Germany, I think I can take a flesh lump in a waistcoat.

Nikita Khrushchev: No matter what happens I will never let any harm come to you.
Svetlana Stalin: I may as well just shoot myself like mother.

[referring to Malenkov’s hair]
Georgy Zhukov: Jesus Christ, did Coco Chanel take a shit on your head?
Georgy Malenkov: No, he did not.

Georgy Zhukov: What’s a war hero got to do to get some lubrication around here?

Vyacheslav Molotov: Stalin will be loving this.

Nikita Khrushchev: You’re the good guy now? You locked up half the nation.
Lavrentiy Beria: Yes, and now I’m releasing them.

[to the military men]
Georgy Zhukov: I’m off to represent the entire Red Army at the buffet. You girls enjoy yourself.

Georgy Malenkov: You know, all of you can kiss my Russian ass.

Andreyev: Don’t worry, nobody is going to get killed. I promise you. This is just a musical emergency.


Vasily Stalin: You will not take me down! I will not be silent!
[he tries to spit in the face of the guard holding him down and the spit lands on his own face instead]

What do you think of The Death of Stalin quotes? Let us know in the comments below as we’d love to know.