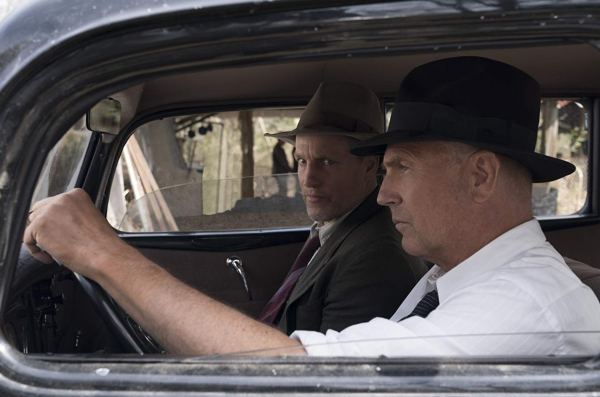 Crime drama directed by John Lee Hancock. Based on a true story which follows two Texas Rangers, Frank Hamer (Kevin Costner), and Maney Gault (Woody Harrelson), as they attempt to track down and apprehend notorious criminals Bonnie and Clyde.

'People don't always know who they are, until it's too late.' - Frank Hamer (The Highwaymen) Click To Tweet

Reporter: Care to comment on the escape, Governor?
Ma Ferguson: Morning, boys.
Reporter: Ma, no one’s ever broken out of your prison. Did Bonnie and Clyde break in? They’ve been on the run for two years, Ma.
Ma Ferguson: Never say die, boys. Say damned, never say die.
Reporter: Some folks are saying that Parker and Barrow are heroes, calling them Robin Hoods. Are they Robin Hoods, Ma?
Ma Ferguson: Did Robin Hood ever shoot a gas station attendant point blank in the head for four dollars and a tank of gas? We will capture Clyde Barrow and his paramore. Write that down and underline it twice.

Ma Ferguson: If today was a fish, I’d throw the son of a bitch back.
[throws a newspaper with heading showing Clyde breaking out five convicts from prison]
Ma Ferguson: How did it happen?
Lee Simmons: Clyde did a nickel at Eastham. He knew the the system, planted guns, ran it like a military operation.
Ma Ferguson: Where are we on this?
State Official #1: Hoover and the FEDS are proceeding…
Ma Ferguson: Where are we on this?
State Official #2: Dallas Detectives, Highway Patrol…
Detective John Quinn: My Ferguson agents.
Lee Simmons: Same as the past six months with no end in sight.
State Official #1: Busted into your facility, Lee.
Lee Simmons: You’re right, they did. Wounded one of my guards, killed another, died in my arms apologizing for letting me down.

Lee Simmons: I’d like a say and how we handle this.
Ma Ferguson: Fine. Let’s hear it.
Lee Simmons: Was a time we’d put a pair of man killers on the trail and let them do their job. Texas Rangers.
Detective John Quinn: Was a time, and that time’s past.
Ma Ferguson: This is 1934, Lee, and you want to put cowboys on Bonnie and Clyde? Is that what you’re selling?
Lee Simmons: Frank Hamer. That’s what I’m selling.
Ma Ferguson: Well, sure. Why don’t we just go dig up Wyatt Earp.
Detective John Quinn: Wild Bill Hickok.
Ma Ferguson: Legislature disbanded the Rangers, Lee.
Lee Simmons: And you’re right proud of it, aren’t you, Mrs. Governor?
Ma Ferguson: Damn right I am. They took orders from no one, and they left me to answer for the blood.
Lee Simmons: Seems like you’re answering for it again. Governor, Bonnie and Clyde have been on the road for two years. Cold-blooded killers who are more adored than movie stars. This has to stop.
[Ferguson turns and walks over to the window]
Ma Ferguson: Well, where is he?

[referring to Hamer driving up to Gault’s house earlier, but then leaving without seeing him]
Frank Hamer: How did you know it was me?
Maney Gault: Between the suit and the car, I thought you was the bank, until I saw how poorly you drove.

[as Hamer is loading his car with ammo]
Maney Gault: All them guns have anything to do with that jackass and his girlfriend? It as bad is the headlines?
Frank Hamer: Yeah.
Maney Gault: You came all the way up to the house. What changed your mind?
Frank Hamer: I don’t know, maybe seeing you move like you’re eighty-five.
Maney Gault: Well, that’s honest. Maybe a little too honest. You could’ve asked me, let me decide. That would have been the polite thing to do.
Frank Hamer: Well, like you said, I changed my mind. Besides, what would your daughter say if you ran off?
Maney Gault: That a weight’s been lifted.

Frank Hamer: Well, you know how it goes, I got to live the way they do, Gault. This case, that means sleeping in the car, driving thousands of miles a week.
Maney Gault: I don’t sleep much anyway. When I do, I most always dream about dead Mexicans.
Frank Hamer: I think I’ll look up Ledbetter.
Maney Gault: He’s dead.
Frank Hamer: Or Cuthbert.
Maney Gault: Dead too. So is Alvarez, and if you go any further down the roster, I’m going to be gravely offended. Dammit, Pancho, I’m above ground and ready to go. Unless you think I’m useless.

Frank Hamer: Thought you had my back. I would have been dead by now.
Maney Gault: If you’d ran one more block, we’d both be dead.
Detective John Quinn: Our information tells us that Barrow might be hiding out down in Brownsville. You probably weren’t aware, but this is a highly coordinated operation. That said, we’re happy for any help you two might give us.

Agent Kendale: Got a thousand person dragnet in full operation. Roadblocks, air surveillance. I don’t think the Barrow Gang’s going to be coming back to the neighborhood any time soon.
Frank Hamer: No, sir. Outlaws and mustangs, they always come home.
Detective John Quinn: Well, maybe you gentlemen should go home too. This isn’t Llano County. It’d be a shame if either of you got hurt in retirement.
Maney Gault: It’d be a shame if anybody got hurt.

Agent Kendale: Sir, if I could, I think what detective Quinn means is the Barrow gang just hit an armory. They’re armed to kill.
[Gault is stunned as he hears the police radio]
Agent Kendale: That’s called a double-band system. Didn’t have one in your saddlebags I imagine. It’s essential in a dragnet. Without it you might as well be in Timbuktu.
Maney Gault: Or down in Brownsville, following your bullshit tip.
[Gault walks over to Hamer]
Maney Gault: I’ve felt more welcome.
Frank Hamer: Yeah.

Maney Gault: We’re looking for a confidence in the neighborhood. Someone who knows the families and willing to talk.
Sheriff Smoot Schmid: Well, how about a boy that grew up with him, that worked with Clyde, known Bonnie ever since you was a girl? A boy that can give you a positive identification on them from first sighting. Now, he’s got the mental range of a windshield wiper, but he’s reliable.
[Gault laughs]
Maney Gault: Where can we find him?
[referring to Deputy Ted Hinton]
Sheriff Smoot Schmid: Holding up the Cola machine.

[reading Bonnie’s poem published in the newspaper]
Maney Gault: “You’ve read the story of Jesse James, and how he lived and died. Still in the need of something to read, here’s the story of Bonnie and Clyde.”
[to Hamer]
Maney Gault: Used to be you had to have talent to get published. Now you just have to shoot people.

[referring to Bonnie shooting a police officer]
Frank Hamer: Little-bitty ain’t but ninety pounds, but she could shoot a patrolman in the face, point blank, while he’s down.
Deputy Ted Hinton: You can tell that from her tracks?
Frank Hamer: See that heel scrape? He was on his side. She used her foot to push him over so he could see what was about to happen. Those kids you grew up with aren’t human any more. Look at me! You remember that at the next road block.

[Hamer visits Clyde’s father]
Henry Barrow: They tell me you’re from the highway department, but I know who you really are. I know a killer when I see one.
Frank Hamer: I’m sure you would, Mr. Barrow.
Henry Barrow: Look, mister, I know y’all going to have to kill my boy. It ain’t your fault. He’s gone past the point of redemption. There’s something I want to say. Here. He wasn’t born that way. He wasn’t born with no dark soul. My little Huck Finn. That’s what me and Cumie called him. He loved bicycles.
[he gives Hamer a photo of Clyde as a boy]
Henry Barrow: What he really wanted to be was a musician. I mean, sure, he liked to dress fine and get the girls and all like that, but, you know, he wasn’t a bad boy. I had high hopes.
Frank Hamer: People don’t always know who they are, until it’s too late.

[as Clyde’s father tells him a story about Clyde]
Frank Hamer: You ever think maybe there was something in Clyde made him steal that chicken in the first place?
Henry Barrow: Maybe he was hungry. Maybe we were all hungry.
Frank Hamer: I won’t argue that.

Henry Barrow: He ain’t going to surrender. They’re just going to hang him anyhow. He’d rather be brought down on the run.
Frank Hamer: You know, your boy may not have been born with a dark soul, but he has one now.
Henry Barrow: You’re not hearing me, mister. I’m trying to say something. It ain’t easy for me to say. I know there’s only one way that this thing is ever going to end. And I’m asking you, please, just end it now, damn it. End it for my family.

[as Gault is at the urinal he’s threatened by three men]
Fancy Dan #1: Let me tell you something, mister. You come to the wrong place to dog Wade boy.
Fancy Dan #2: That’s right, old man.
Fancy Dan #1: You see, Wade Boy runs with Clyde, and around here, Clyde is king.
[holds up a knife]
Maney Gault: Watch those fancy shoes.
[Gault turns, punches the man and puts his head in the toilet, then turns and points his gun at the other two men]
Maney Gault: It’s a real mess, you get it point blank, but I’m happy to do it for you. A lot of nerve you got trying to rob a fella while he’s having himself a pleasant relief. Get yourselves in that stall.
[the two men enter the stall]
Maney Gault: Stay in there till I come back and tell you different.

[as he flushes the toilet on the man’s head that tried to assault him]
Maney Gault: Clyde might be king, but I’m a Texas Ranger, you little shit.

Ivy Methvin: Well, who are you fellas?
Frank Hamer: It doesn’t concern you. All you need to know is Bonnie and Clyde are going down hard, Mr. Methvin. If not by the gun, then by the chair.

[referring to killing Bonnie and Clyde]
Deputy Ted Hinton: Dallas paper gave me a camera to film it when it happens. Said he’d pay me. Y’all believe that?
Maney Gault: What the hell is this world coming to?

[as they have set up an ambush waiting for Bonnie and Clyde]
Frank Hamer: Maney, for the record, you only move like a seventy-five.
[Maney chuckles]
Frank Hamer: The reason I passed your house that day was because I wanted to spare you this. That said, I’m real glad you’re here.
Maney Gault: Me too, Pancho. Me too.

[to Bonnie and Clyde]
Frank Hamer: Stick ’em up.
[not complying and as they prepare to draw their own guns, the posse guns them down]

[as Gault is looking at the bullet riddled bodies of Bonnie and Clyde]
Maney Gault: Manos arribas.

[as the dead bodies of Bonnie and Clyde in their car is being towed through the town and mobbed by onlookers]
Local Reporter: Mr. Hamer? Excuse me, Mr. Hamer, there’s a fella on the phone from the Associated Press in New York. He says he’ll give you a thousand dollars for a phone interview right now. Got him on the line in the back. Mr. Hamer?
[Hamer turns and walks off]
Maney Gault: Shame on you.

[last lines]
Reporter: Would you care to comment on your role in the apprehension of Bonnie and Clyde?
Ma Ferguson: I knew Hamer and Gault would get the job done. That’s why I chose them. Bottom line.


What do you think of The Highwaymen quotes? Let us know what you think in the comments below as we’d love to know.