The Lego Movie 2: The Second Part Best Quotes – ‘Stop pretending everything is awesome.’ 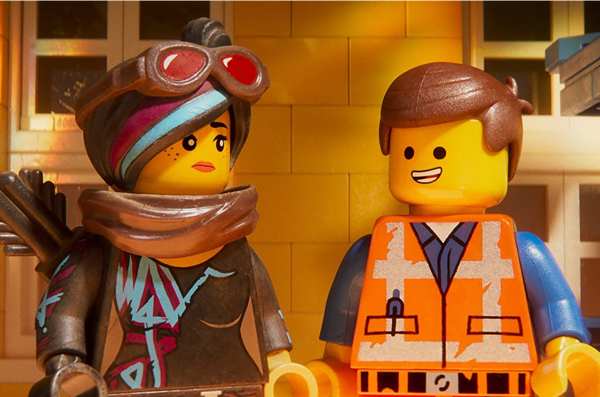 Animated action adventure sequel directed by Mike Mitchell and Trisha Gum. It’s been five years since everything was awesome and the citizens are facing a huge new threat: LEGO DUPLO invaders from outer space, wrecking everything faster than they can rebuild.

The battle to defeat them and restore harmony to the LEGO universe will take Emmet (Chris Pratt), Lucy (Elizabeth Banks), Batman (Will Arnett) and their friends to faraway, unexplored worlds, including a strange galaxy where everything is a musical. It will test their courage, creativity and Master Building skills, and reveal just how special they really are.

Duplo: We are from the planet Duplo, and we are here to destroy you.
Emmet Brickowoski: Oh, man!
Lucy: You’re going to have to get past us.
Batman: Specifically me.
Unikitty: Oh, it’s on!
MetalBeard: Yar!
Emmet Brickowoski: Wait, guys. There’s no need to fight anymore. I got this.
Lucy: Yeah, I don’t think that’s a good idea.

[to the Duplo aliens]
Emmet Brickowoski: Hello, visitors from another planet. You are just as special as we are.
[he builds a Lego in the shape of a heart]
Emmet Brickowoski: See? Friends.
Duplos: Ooh!
Emmet Brickowoski: Yes.
Batman: What do you know? It worked.
Unikitty: Even though we’re different, I guess if we open our hearts everything can be aw…
[just then a Duplo suddenly bites onto the Lego heart and eats it]

[Batman throws a batarang]
Duplo: You missed me!
Batman: No, I did not!

[as they are being attacked by Duplo aliens]
Emmet Brickowoski: Don’t worry, Lucy. Everything can still be awesome!

Lucy: [voice over] It wasn’t awesome. We fought them off, but they kept returning. Every time we rebuilt, they kept coming after whatever bright and shiny thing caught their eye, and always accompanied by catchy pop music. A league of brave heroes volunteered to chase them to wherever they came from.

Lucy: [voice over] We may never know if they even made it to the aliens or were lost in the dreaded Stairgate.
[the screen shows it’s five years later]
Lucy: [voice over] A lifetime has passed since then. We grew up. Abandoned anything cute, shiny, poppy, or young. And from the wreckage, we built a grittier, cooler, more mature society. We call it Apocalypseburg, and it is a heckish place to live. Show weakness and you’ll be eaten alive.

Lucy: [voice over] This new life has toughened and hardened us all.
[we then see Emmet ordering coffee]
Emmet Brickowoski: Two coffees, please. One black, one with just a touch of cream and twenty-five sugars.
Lucy: [voice over] Well, toughened most of us.

Lucy: [voice over] Once I was a rebel, fighting for a righteous cause. Now, I only fight to survive. Everything was awesome. Now everything is bleak.
Emmet Brickowoski: Hey, Lucy! I brought you coffee.
Lucy: Coffee. The bitter liquid that provides the only semblance of pleasure left in these dark times.
Emmet Brickowoski: Oh, my goshness. Did I interrupt you brooding just now?
Lucy: Ah, this brooding sesh is not really going anywhere.
Emmet Brickowoski: Man, I wish I could brood like you.
Lucy: Look, all you got to do is just stare off into the distance and then narrate whatever grim thoughts come into your mind.
Emmet Brickowoski: What if one day there was no coffee?
Lucy: More like, “War hardens the heart.”

Lucy: Emmet, you’ve got to stop pretending everything is awesome. It isn’t. Every morning, you walk through town, singing that terrible, annoying, manufactured pop song!
Emmet Brickowoski: [chuckles] That song really seems to upset you.
Lucy: No, it doesn’t.
Emmet Brickowoski: Oh, my mistake.
Lucy: That song was fine when we were younger, but we also have to grow up sometime. Can you do that for me?
Emmet Brickowoski: Well, yeah. I can try. But it’s easy for you. You were always a dark, goth rebel.
Lucy: Yes, of course I was.

Lucy: We have to be hardened and battle ready. Both of us.
Emmet Brickowoski: Yeah. No, I get it. And that’s why I’ve cultivated a totally hard-edged side that’s super tough and, look, look! A shooting star.
[he runs towards it]
Emmet Brickowoski: Make a wish!
Lucy: Oh, no!
Emmet Brickowoski: What? Can’t think of anything to wish for? I always just wish for more wishes, because you can never have enough.

[referring to the spaceship]
Lucy: We’ve never seen anything like this.
Unikitty: They’re evolving.
Lucy: What is it up to?
Emmet Brickowoski: I don’t know, but that beat is pretty fresh.

[as a spaceship chases them]
Emmet Brickowoski: Hurry, the door is slowly closing.
Lucy: Good thing the door is closing so slowly and dramatically.

[everyone is in the cave, but a small star is caught in the door]
Star: Oh, the pain!
[Star stars to whimpers]
Star: It’s getting so cold. Help me.
[Emmet starts to feel sorry for Star]
General Mayhem: I’m General Mayhem. Intergalactic Naval Commander of the Systar System. Open the gate.
Lucy: No way! That gate is never, ever, ever, ever… Emmet, what are you doing?
[ Emmet opens the door to let Star in]
Star: Hooray!
Emmet Brickowoski: See? That wasn’t so bad. Nothing got in.
[just then he sees General Mayhem standing beside him]
Emmet Brickowoski: Aah! Something got in!

General Mayhem: Bring me your fiercest leader.
Batman: Yeah, that’s me. This guy, coming through. I’m the leader, obvs.
Lucy: You? I don’t think so.
Batman: How many movies have they made about you? Because there are like nine about me, and like three others in various stages of development.

Emmet Brickowoski: Wait a minute. When everyone became the Special, didn’t we all become leaders?
General Mayhem: No offense, I sense no leadership qualities from you. My readout confirms you to be soft, fragile, and a less than worthy opponent.
Lucy: Hey! You watch what you say about Emmet.

[referring to Emmet]
Lucy: He saved the universe a few years back.
General Mayhem: This guy was a fierce warrior?
Lucy: Okay, well, technically I did the warrior stuff, but…
General Mayhem: So, you fought, and masterbuilt, and kicked butt, and then that hapless male was the leader?
Lucy: Um, well, you know, he was a symbol for, that we all have ideas and, um…
General Mayhem: But you did all the work.

Lucy: Emmet is the sweetest, most optimistic guy you could ever meet. And I know those qualities are not useful anymore, and that Emmet isn’t changing with the times, and lacks a killer instinct, and in general, just isn’t tough enough.
Emmet Brickowoski: Not tough enough?
Lucy: Yeah, but this guy is the Special. Well, at least he was.
General Mayhem: Silence. I don’t have room in my ship to take everyone. I can fit maybe five.
Lucy: Take?
General Mayhem: I’ll explain with a memorable jingle.

[after Lucy, Batman, Unikitty, Metal Beard and Benny have been kidnapped]
Mermaid: Emmet, what have you done?
Emmet Brickowoski: Wait. You guys don’t think this is all my fault?
Sherry Scratchen-Post: Maybe not entirely your fault.
Sheryl Swoopes: It’s totally your fault.
Gary Payton: You got that right, WNBA legend Sheryl Swoopes.

Emmet Brickowoski: I’ll show them all how tough I am.
[he converts his destroyed house into a spaceship]
Emmet Brickowoski: Hang on to your fronds, Planty. We’re going to save Lucy, and all of the other people who were captured.

Emmet Brickowoski: Wow. You’re so much more cool and grown up than me. You could teach me! Rex, help me rescue my friends, stop Armamageddon, and teach me to be like you. Someone Lucy will be proud of, and I’ll be the brother you never had. Unless you do have a brother. I don’t really know you that well.
Rex Dangervest: Alright, kid, you listen. You go soft, you’re playing their game. You’re going to have to grow up and grow up fast. Are you ready to do that?
Emmet Brickowoski: Yes, I am.
Rex Dangervest: I can’t hear you.
Emmet Brickowoski: Really? I was speaking at normal volume.
Rex Dangervest: Sorry, man. I’m just a little hard of hearing from listening to my mixtapes super loud with no regard for my future hearing, because I live in the now.

Robot: I’m sorry, no entry allowed. Who are you?
Lucy: Who, me?
[laughs then becomes serious]
Lucy: I’m your worst nightmare.
Robot: You’re me when I’m late to school, and I forgot my homework ,and my pants are made of pudding?
Lucy: No, I don’t…
[she jump kicks the robot]

What do you think of The Lego Movie 2: The Second Part quotes? Let us know what you think in the comments below as we’d love to know.