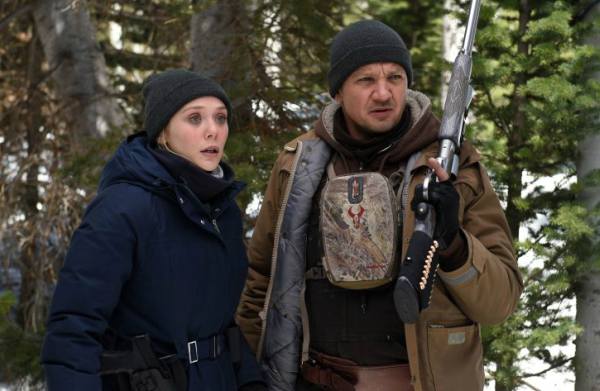 Thriller written directed and written by Taylor Sheridan in his directorial debut. The story follows a rookie FBI agent Jane Banner (Elizabeth Olsen) who is sent to investigate the murder of a local girl on a remote Native American Reservation in the hopes of solving her mysterious death.

However, Jane is unprepared for the difficulties created by the oppressive weather and isolation of the Wyoming winter and has to team up with US Fish and Wildlife Service agent Cory Lambert (Jeremy Renner) with deep community ties and a haunted past (Jeremy Renner) to investigate the murder. Jane and Cory venture deep into a world ravaged by violence and the elements.

'You can't steer from the pain. If you do, you'll rob yourself.' - Cory Lambert (Wind River) Click To Tweet

Jane Banner: I’m Jane Banner, FBI.
Ben: Welcome to Wyoming. Are you by yourself?
Jane Banner: It’s just me.
Ben: That’s Cory Lambert, he’s the one who found the body.

Cory Lambert: The Tamis people were forced here, stuck here for a century. The snow and silence, it’s the only thing that hasn’t been taken from them.

Jane Banner: This is a homicide.
Cory Lambert: I knew that girl, she’s a fighter.

Jane Banner: How far do you think someone could run barefoot out here?

Jane Banner: They have six officers to cover an area the size of Rhode Island. Maybe you can help.
Cory Lambert: I know its track site. I can help.

Jane Banner: What is it that you do again?
Cory Lambert: I hunt predators.
Jane Banner: So why don’t you come hunt one for me then?

Jane Banner: Why would a teenage girl be out here? What was she running from? What happened?

Cory Lambert: You’re looking for clues, but you’re missing all the signs.

Jane Banner: Why would your daughter run from home?
Martin Hanson: I don’t know why, she didn’t tell me.

Jane Banner: I don’t mean to offend you. I am just trying to understand the dynamic here, Mr. Hanson. I’m trying to help.
Martin: Why is it whenever you people try to help, it starts with insults?

Cory Lambert: I’d like to tell you it gets easier. It doesn’t. If there’s any comfort, it’s getting used to the pain, I suppose. I went to a grief seminar in Casper. Did you know that? I don’t know why, I just wanted the bad to go away, I wanted answers to questions that couldn’t be answered. The counselor come up to me after the seminar and sat down next to me, and he said something that stuck with me. I don’t know if it’s what he said, or it’s how he said it. He says, “I got some good news, and I got some bad news. Bad news is you’re never going to be the same. You’re never going to be whole, not ever again. You lost your daughter. Nothing’s ever going to replace that. Now the good news is, as soon as you accept that, and you let yourself suffer, you’ll allow yourself to visit her in your mind, and you’ll remember all the love she gave, all the joy she knew.” Point is, Martin, you can’t steer from the pain. If you do, you’ll rob yourself, you’ll rob yourself of every memory of her. Every last one, from her first step to her last smile. Kill them all. Just take the pain, Martin. You hear me? You take it. It’s the only way you’ll keep her with you.
Martin: I’m just tired, Cory. You know, I’m just tired of fighting this life.

Jane Banner: Shouldn’t we just maybe wait for some backup?
Ben: This isn’t the land of backup, Jane. This is the land of “you’re on your own”.

Wilma Lambert: You won’t get the answers you’re looking for, no matter what you find.

Jane Banner: I think they were multiple assailants.

Jane Banner: You don’t think I can make it?

Cory Lambert: Out here you survive or you surrender.

Cory Lambert: Out here, you cannot blink, not once, not ever.

Chip: This place, what it takes from us, what it took from you.

Chip: You think this is who I wanted to be? Man, I get so mad, I want to fight the whole world. You got any idea what that feels like?
Cory Lambert: I do, but I decided to fight the feeling instead, because I figured the world would win.

Cory Lambert: You don’t catch wolves looking where they might be, you look where they’ve been. They been right here.

Cory Lambert: Jane, you’re a tough woman. You saved your own life.
Jane Banner: We should both be honest. I just, I got lucky.
Cory Lambert: Well, you know, luck don’t live out here. Luck lives in the city. It don’t live out here. You know, that’s whether you get, you know, hit by a bus or not. Whether your bank is robbed or not, or whether someone’s on their damn cell phone when they come up to a crosswalk, that’s luck. That’s winning or losing. Out here, you survive or you surrender. Period. That’s determined by your strength and by your spirit. Wolves don’t kill unlucky deer. They kill the weak ones. You fought for your life, Jane. Now you get to walk away with it. You get to go home.

Jane Banner: She ran six miles in the snow.
Cory Lambert: Yes, she did.