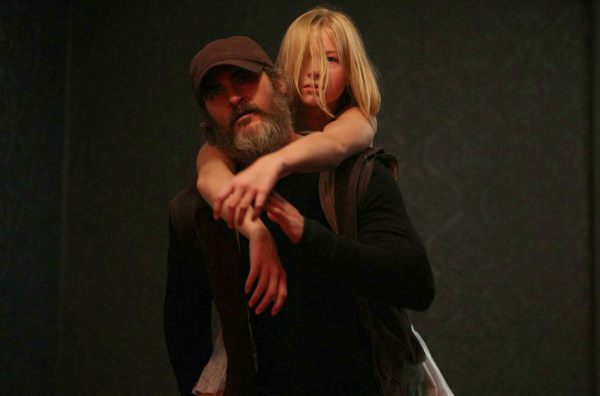 You Were Never Really Here is about Joe (Joaquin Phoenix), a former FBI agent and a contract killer who struggles with post-traumatic stress disorder while works to track down missing girls who are sold to prostitution. Joe’s next job is to find and rescue Nina, a Senator’s daughter who has been abducted, while tracking her down he is continuously assailant by persisting traumatic memories but things spins out of control when he uncovers a conspiracy.

While this conspiracy starts to unravel the film depiction of violence becomes more graphic and Joe’s mental health deteriorates to the point where his past traumas intrude his daily life making him unable to function as a healthy individual. He eventually becomes devoid of any trace of empathy towards the countless victims he kills while wielding a hammer, which becomes an extension of himself, an extra limb saturated in crimson.

You Were Never Really Here is Lynne Ramsay first feature film in over six years, in 2013 she was attached to direct Jane Got a Gun, starring Natalie Portman, but in the same year she exited the film due to creative differences, this film was then directed by Gavin O’Connor receiving mixed reviews and failing at the box office. Lynne Ramsay is a filmmaker with a very idiosyncratic style, her films have recurring themes of guilt, grief, death and trauma with penchant for explicit violent scenes and tormented and disturbed main characters.

Joaquin Phoenix plays Joe, a tormented individual who lives with his elder mother, an unwholesome relationship that evokes the relationship between Norman Bates and his mother from Psycho.

Alfred Hitchcock’s masterpiece is further invoked when Joe’s mother watches Psycho and when Joe alludes to the shower scene while holding a knife. Akin to Hitchcock, Ramsay is also interested in exploring the disturbed psychological condition of its main character, she conveys Joe’s past traumas by inserting momentary flashbacks which interrupts the linear narrative of the film. These flashbacks are abrupt and extremely disturbing, Ramsay uses rapid editing, eerie non-diegetic music and unconventional camera angles to masterfully convey Joe’s affliction and mental deterioration. The inclusion of these flashbacks provides us a brief glimpse into Joe’s disturbed inner world but their continuous appearance also increases Joe’s suicidal tendencies and withdrawn nature.

Just like Ramsay’s previous film We Need to Talk About Kevin this film also explores the psychological nature of its lead character, this exploration of suffering is an integral part for understanding You Were Never Really Here. The explicit violence that Joe commits while wielding a hammer, indicates his callousness because he is a man who has suffered enough and through this suffering he has become immune to the violence and the sight of blood , all the gore and trail of dead bodies that he leaves behind does not affect him at all compare to what he has to endure on a daily basis by trying to escape and stifle his own past. You Were Never Here is a punishing and unrelenting film that from beginning to end conveys suffering, despair, gore, violence and leaves us breathless and staggering because it fully immerse us into the its bleak and violent world that lacks any sign of hope or catharsis

Editor Joe Bini conveys in a very effective way Joe’s trauma and suffering by the momentary insertion of flashbacks that last for a few seconds but their effect lingers for the rest of the film, and we us viewers somehow understand the pain and despair that Joe feels. When the number of flashbacks increases so does Joe’s suffering and despair and this become more evident when Nina at some point has to help him, showing that his mental affliction has reduced him into a frightened and helpless child who needs the assistance of someone more responsible.

Verdict: A superb psychological thriller that has an astonishing central performance by Joaquin Phoenix, a moody, eerie and electronic score by Jonny Greenwood, nocturnal cinematography that conveys its bleak nature and violence and gore that will surely disturb.

Joe’s Mother: [to Joe] Where do you spend your time? What do you do out there alone?

Joe: I’m going to ask you some questions. How many are there?
Man: One guy inside the front door, a second guy on the top floor.

[on the phone]
Voice: After the tone, please leave a message.
Joe: It’s done.

Angel: [to Joe] A man called, and he wants to see you.

John McCleary: Senator Albert Votto, his teenage daughter is missing.
Joe: What’s the lead?
John McCleary: He got an anonymous text with an address.

Joe: Why am I here?
John McCleary: Albert Votto, his teenage daughter has been missing all weekend.

John McCleary: [to Joe] Senator Albert Votto, he doesn’t want to get the cops involved. He wants to meet you.

Senator Votto: Her name is Nina. Do you have kids, Joe?
Joe: No.
Senator Votto: They’ll hurt her, these places, if she’s there.
Joe: I’ll get her.

Senator Votto: Do you have kids, Joe? Nina, her name is Nina. 235 East, 31st Street. I’ve heard of these places.
Joe: If she’s there I’ll get her.
Senator Votto: McCleary said you were brutal.
Joe: I can be.
Senator Votto: I want you to hurt them.

[showing a photo to a man he’s beaten up]
Joe: Look, have you seen this girl? Is she inside?

Joe: Security, how many are there?

Nina: Where are we going?
Joe: I’m taking you to your dad.

Joe: [to Nina] Close your eyes.

Joe: Pick up the phone.
John McCleary: What’s going on?
Joe: The cops are involved.

Joe: I don’t know what the fuck is going on here.

“On a quest, the clear path is never the right one.”