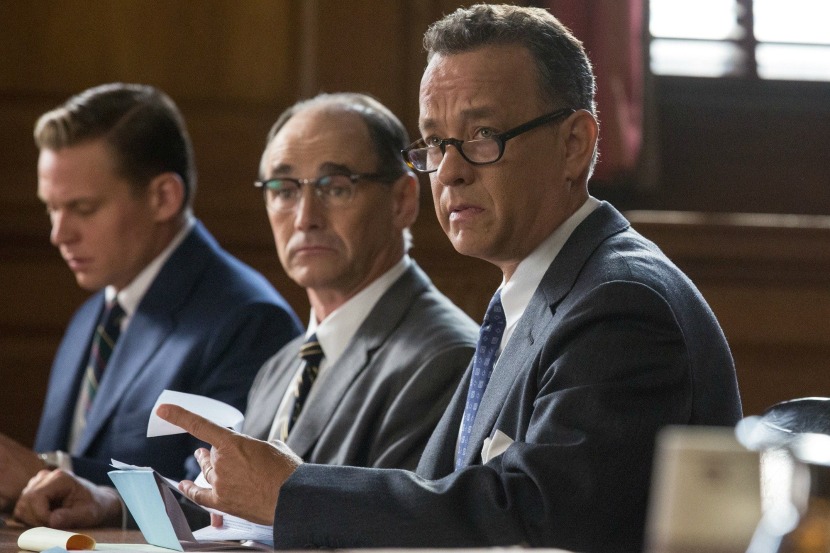 Based on the 1960 U-2 incident the story follows James Donovan (Tom Hanks), a Brooklyn lawyer who finds himself thrust into the center of the Cold War when the CIA tasks him with defending captured Soviet spy, Rudolf Abel (Mark Rylance), and then with negotiating the near-impossible task to trade him with the Soviet Union to release a captured American U-2 pilot Francis Gary Powers (Austin Stowell).

Williams: We are engaged in a war with the Soviet Union. This war does not for the moment involve men in arms, it involves information.

Allen Dulles: We’ve got a a Soviet spy. But there’s a wrinkle. They’ve got our spy pilot full of a head full of classified information. The Russians want their man back before he cracks. We want you to negotiate the swap.
James Donovan: I’m an insurance lawyer, I haven’t done criminal work in years.

James Donovan: You have been charged with three counts and nineteen overt acts. Conspiracy to transmit United States defense and atomic secrets to the Soviet Union, conspiracy to gather secrets, and failing to register as a foreign agent.
Rudolf Abel: Do many foreign agents register?

Rudolf Abel: Are you good at what you do?
James Donovan: This will be a first for the both of us.
Rudolf Abel: You should be careful.

Rudolf Abel: Standing there like that you reminded me of the man that used to come to our house when I was young. My father used to say: “watch this man”, so I did, every time he came. And never once he do anything remarkable.
James Donovan: And I remind you of him?
Rudolf Abel: This one time, I was at the age of your son, our house is overrun by partisan boarder guards. Dozen of them. My father was beaten, my mother was beaten, and this man, my father’s friend, he was beaten. And I watched this man. Every time they hit him, he stood back up again. Soldier hit him harder, still he got back up to his feet. I think because of this they stopped the beating and let him live. “Stoikiy muzhik”. Which sort of means like a “standing man”. Standing man.

Mary Donovan: People are scared of this man. He’s a threat to all of us. Do you know how people will look at us? The family of the man trying to free a traitor?
James Donovan: Everyone deserves a defense. Every person matters.

James Donovan: Tell me what happened?
Allen Dulles: They got our spy pilot full of a head full of classified information, we got their guy. We want you to negotiate the swap, so it’s not governments talking.

Williams: [to Donovan] You could prevent a full thermo nuclear exchange with the Soviet Union. I’m talking to you about the security of your country.

James Donovan: Where do they want this negotiations to take place?
Allen Dulles: East Berlin.

Mary Donovan: [to Donovan] Just tell that you’re not going to be in any danger. I don’t even care if it’s the truth, give me something to hold onto.

Mary Donovan: [to Donovan] There’s a cost to these things. A cost to you and your family.

Hoffman: There are only a few routes left to the East, and the rule of law is less firmly established over there. Just avoid interaction with people generally. You don’t belong. You’re an American, you could well be detained. Definitely stay away from the wall, cross it and you’ll be shot.

James Donovan: We need to have the conversation our governments can’t.
Wolfgang Vogel: People in my country consider this an act of war.
James Donovan: You can call it what you want. Let’s be clear, nobody is safe.

Judge Byers: We’re in a battle for civilization.
James Donovan: The constitution, it’s what makes us Americans. Shouldn’t we show our enemy who we are?

Rudolf Abel: What’s the move when you don’t know what the game is?

James Donovan: The next mistake our countries make could be the last one.

James Donovan: But, Rudolf, is there not the possibility that my people are going to shoot me?
Rudolf Abel: Yes.
James Donovan: You’re not worried?
Rudolf Abel: Would it help? To answer your question, my friend, I acted honorably. I think they know that. But sometimes people think wrong. People are people.

James Donovan: The coward must abandon his dignity before he abandons the field of battle.

Wolfgang Vogel: This unfortunate, Frederic Pryor, he was in the wrong place at the wrong time. But every accident, properly viewed, is an opportunity, isn’t it, Mr. Donovan?
James Donovan: Well, your country refuses to recognize the German Democratic Republic.

James Donovan: The death sentence is not a foregone conclusion. Don’t worry.
Rudolf Abel: I’m not afraid to die, Mr. Donovan. Although, it wouldn’t be my first choice.

James Donovan: It doesn’t matter what people think. You know what you did.