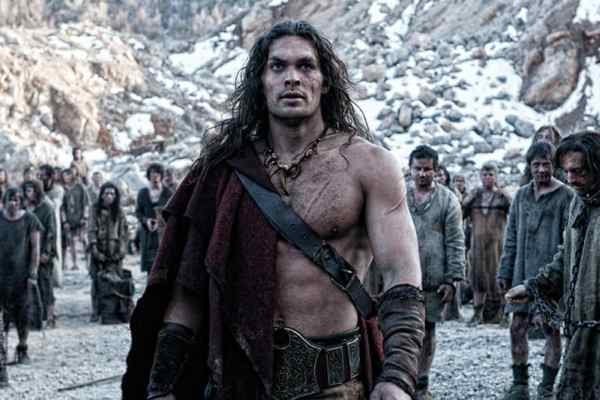 The movie opens with a map and narration. Following a common method to try and show that what you are about to view is something of an epic. The narration is provided by the magical voice of Morgan Freeman, I feel was picked to try and bolster the “epic” feel of the movie.

However this is no Lord of the Rings. It may start with an epic battle over destroying a magical object, but it quickly sets itself apart. This is when a man (Ron Perlman) has to perform an emergency Caesarian on his dying wife with his own sword. This is to show Conan was “born of battle”.

The superfluous first half hour exists to only show you how capable Conan (Jason Momoa) is at killing when he’s young. Making it obvious that when he becomes an adult, he’s going to be a non-stop killing machine.

The plot of the movie is that of revenge, which feels it was only written to showcase just how good Conan is at killing. There is obviously no danger for him, which makes it hard to care for him.

Around the middle of the film is the obligatory first confrontation with the villain the hero wants to kill. In this, Conan faces off against the evil Khalar Zym (Stephen Lang) and his spell wielding daughter Marique (Rose McGowan). During this fight, Conan must keep his forced love interest, Tamara (Rachel Nichols) safe.

During this fight scene, Marique casts a spell that summons creatures to form from sand and fight Conan. The special effects looked good and they juggled multiple monsters well. However it served to only keep the number of fight scenes up.

There is a fight scene toward the end, just before the final confrontation. It takes place on a platform above water. Turns out this is a pit to sacrifice prisoners to a tentacled beast that dwells below. This is a nice scene to watch and it’s there to remind you this is a fantasy world and not just swords and sandals. Although it was obvious there was no danger to Conan (is there ever), he does need to keep someone else alive. I found this fight scene a little more exciting than the overdrawn final confrontation.

This final confrontation involved Conan, Tamara, Marique and Khalar Zym. Most of the time Tamara contributes nothing to the fight and screams incessantly. The fight was a bore and only served to show Khalar Zym’s plan start to come to fruition, only to have it taken away. Because Conan, that’s why.

This movie is essentially a revenge action flick set in a dark fantasy world that does its best to remind the audience they are watching a fantasy movie. There is never a sense of threat and things feel rushed. The movie is spotted with CGI establishing shots to try and showcase exotic locations but these feel underwhelming. There are some good fight scenes with heavy violence and the conclusive fight drags on way too long.

The acting feels a little stunted, with Rose McGowan being the main perpetrator. Her performance of a sadistic witch comes across as though she is always straining. Stephen Lang does not come across as a commanding villain to be feared and Rachel Nichols’ presence is easily forgotten.

Jason Momoa fits the anti-hero action star well. He has the smile, the dead-pan humour and the body that all action heroes need. He was the best performer in the movie, however that is not saying a lot.

If you are a fan of movies with actors like Jason Statham or most of the cast of The Expendables, than this is the movie for you. At the end of the day, it’s an action/revenge flick with a dabbling of fantasy. A popcorn flick.

Despite its many shortcomings and rushed feel I did find it entertaining. It just wasn’t very good.