Demolition Best Quotes – ‘Repairing the human heart is like repairing and automobile.’ 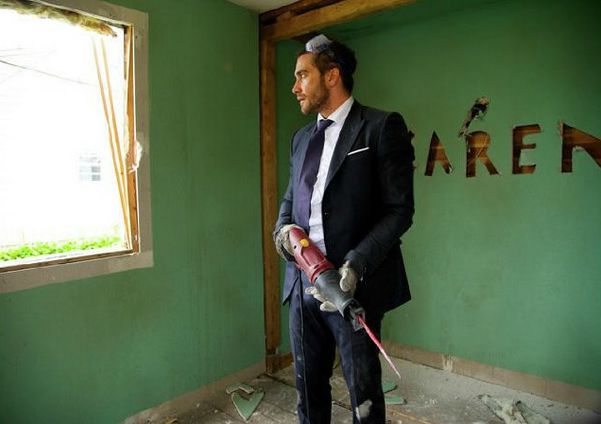 Drama directed by Jean-Marc Vallée based on a Black List screenplay by Bryan Sipe, the story follows Davis Mitchell (Jake Gyllenhaal), a successful investment banker, who is struggling after losing his wife, Julia (Heather Lind) in a tragic car crash.

Despite pressure from his father-in-law Phil (Chris Cooper) to pull it together, Davis continues to unravel. What starts as a complaint letter to a vending machine company turns into a series of letters revealing startling personal admissions.

Davis’ letters catch the attention of customer service rep Karen (Naomi Watts) and, amidst emotional and financial burdens of her own, the two form an unlikely connection. With the help of Karen and her son Chris (Judah Lewis), Davis starts to rebuild, beginning with the demolition of the life he once knew.

[writing a letter]
Davis Mitchell: [voice over] Dear Champion Vending Company, this letter is in regards to a poor vending experience at St. Andreas. I put five quarters in your machine and proceeded to push B2, which should have given me peanut M&M’s, regrettably it did not. I found this upsetting as I was very hungry and also my wife had died ten minutes earlier. I’m not saying that was your fault, I just want to be thorough. Julia was a good person, she worked with special needs children. She snorted when she laughed, other than that I don’t think I knew who she really was. And now that she’s gone I don’t really feel sad or pain.

[at the doctors]
Dr. Brodkey: Where exactly are you feeling numb?
[refers to his entire body]
Davis Mitchell: Sort of in this whole area right here.

[writing a letter]
Davis Mitchell: [voice over] Dear Champion Vending Company, this letter is in regard to vending machine 714 located in St. Andreas Hospital which should have given me peanut M&Ms. Regrettably, it didn’t. I found this upsetting because I was very hungry and also my wife had died ten minutes earlier. Maybe I should start from the beginning.

Davis Mitchell: [voice over] I get up every morning at five thirty. I work in the markets so it’s important to get an early start. It’s a small firm, but we handle quite a bit of money. I don’t want to say how much because I think would be inappropriate. Okay, it’s six billion. I never thought I’d be one of those people who carried a briefcase. It always reminds me of carrying a lunchbox to school.

Davis Mitchell: [voice over] I don’t think Phil liked me that much at first. I grew up in Jersey, I didn’t come from money and I puked on the ice sculpture at our engagement party. Also he told me once…
Phil: I don’t like you, Davis.

Davis Mitchell: [voice over] Julia was a nice girl, a good person. She worked with special needs children, she snorted when she laughed and cried every time they showed footage of the Towers falling. Other than that I don’t think I knew who she really was. She always said I didn’t pay attention. I find I’m suddenly starting to notice things I never saw before. Well, maybe I saw them, I just wasn’t paying attention.

Davis Mitchell: [voice over] Phil said it himself, “If you want to fix something you have to take everything apart and figure out what’s important.”

Phil: [to Davis] Repairing the human heart is like repairing and automobile. You have to take everything apart, just examine everything, and then you can put it all back together.

[writing a letter]
Davis Mitchell: [voice over] That made me think, Vending Co., what if that’s not possible?

Karen Moreno: This is Karen Moreno from Champion Vending Company. I’m calling in regards to your complaint letters, there’s been four so far. Do you have anyone to talk to.
Davis Mitchell: Do you usually make service calls at two in the morning.

Karen Moreno: Do you miss her?
Davis Mitchell: I’m trying to.

Chris Moreno: Are you for real right now? There’s some random guy eating in our house.
Karen Moreno: The man’s wife just died! Have some compassion!

Davis Mitchell: Do you think it’s too late to get it all whole back together?

Chris Moreno: What are we doing again?
Davis Mitchell: We’re taking apart my marriage.
[they start smashing and destroying the inside of Davis’s house and furniture]

Davis Mitchell: [to Phil] There was love between me and Julia. I just didn’t take care of it.

Chris Moreno: A bulldozer?
Davis Mitchell: Yeah, you can buy almost anything on eBay.

[Davis opens the door to see Karen looking wet]
Karen Moreno: Don’t ask, it’s embarrassing. I closed the car door on my jacket, your sprinklers turned on, and then the stupid lock sometimes get stuck, I, I couldn’t…
Davis Mitchell: You’re high, aren’t you?
Karen Moreno: A little bit.
[they see a car driving by in the road]
Davis Mitchell: Do you want some grilled cheese?

[as they are sat eating grilled cheese in Davis’s kitchen]
Karen Moreno: Your whole house is just lovely. Aside from the appliances, it’s the kind of house people dream of living in.
Davis Mitchell: I hate this house, it’s just shiny stuff.