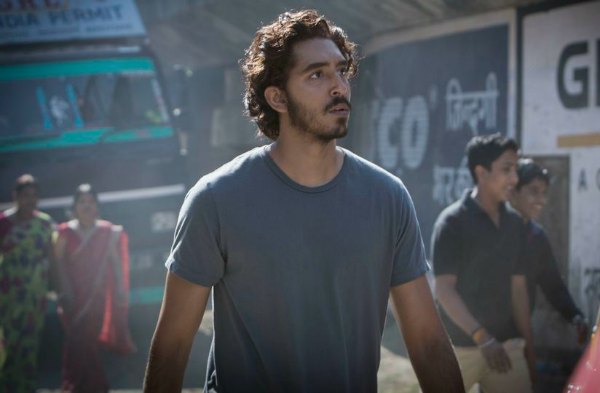 Nothing compares to the empty feeling of being lost and alone, separated from loved ones. It’s something unimaginable for any parent or child to experience over an extended period of time. Saroo Brierley experienced that separation from his siblings and mother for over 25 years. Lion is the remarkable true story about one boy never giving up hope and what the strength of a family’s love can do for perseverance.

This extraordinary tale first takes place in the mid ’80s where two young brothers, Saroo (an outstanding Sunny Pawar) and Guddu (Abhishek Bharate) are doing their best to help out their single mother and sister in order to survive in their rural Indian village. Guddu and Saroo spend their days bonding and roaming the countryside of India. Oh, they also try not to fall to their deaths while simultaneously stealing bags of coal off of trains so they can trade it at the local market for milk and food. It is established very early that Guddu and his younger brother Saroo have a very special bond for one another, which leads to Guddu allowing his little brother to tag along for ‘night work.’ Being the five year old that Saroo is, he falls asleep and Guddu places him on a bench stating that he is going to find the correct way to go. Once Saroo awakens from his slumber and there is no sight of his brother, he starts to wander shouting for his older brother. He stumbles upon an empty train still looking for his brother where he decides to lie down and rest. Circumstances only take a turn for the worse when he wakes up and the train is taking him thousands of kilometers in the complete opposite direction from which he and his brother came from.

This is a nightmare scenario for any child to endure. The only one that can truly shed any light on the situation would be the man himself, Saroo Brierley, for which this screenplay is adapted from his own book, “A Long Way Home.” His journey continues as he is finally able to get off the train and has to roam the streets of Calcutta where everyone speaks Bengali. Saroo unfortunately only knows Hindi thus every stranger brushes him off having no idea what he is trying to say. Most children would lose any faith or spirit that they had if they found themselves in such a desolate state. Saroo never seemed to lose any belief in himself or give up hope. He continued his trek doing the best that he could do to give himself a chance to make it back home to his family. Sunny Pawar takes on the character of Saroo with such a calm demeanor accompanied by a subtle, unwavering confidence that makes his character so enjoyable for the audience to pull for. It’s a performance that deserves more attention a la Jacob Tremblay’s performance in Room (2015).

Saroo eventually finds himself in an orphanage and later adopted by a married Australian couple John (David Wenham) and Sue Brierley (Nicole Kidman). The narrative then transitions to the second half of the movie or in my opinion, essentially a second movie. The first half of the film did such an eloquent job with its pacing, the balance of the story and how it transitions from scene to scene. This does not seem to carry over as well to the next half of the movie where we follow Saroo into adulthood. It certainly does not take away from the movie as a whole but it seems to lack in the aspects of what the first half did so well. Saroo tries to find the balance of his parents, adopted brother Mantosh and girlfriend Lucy (Rooney Mara). The jumps of focus on each one of these people in his life seem to muck up the narrative a bit to where it doesn’t stay on the course that it once was on. It finally gets back on track and leads to his revelation to find his true home. Using technology and Google maps at its finest, he learns of his native village and sets off on a journey back home. Even though I have shared my frustrations with the second half of the film, the final act presents the viewers with a poignant and a ‘tug at your heart’ ending sequence.

Lion has now secured 6 Academy Awards nominations tied with Manchester by the Sea and just behind Moonlight as well as La La Land. Each one is worthy of their recognition in their own rights and are all up for Best Motion Picture. What makes Lion so powerful and unique is that this is a true story of a real life experience for a young boy and man. It was a long time coming for Saroo Brierley but as the saying goes, “home is where the heart is.”