The Man Who Knew Infinity Best Quotes – ‘I owe you so much.’ 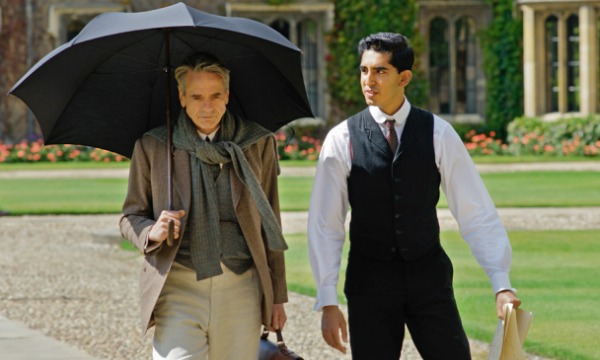 Biographical drama directed by Matthew Brown about the real-life story of Srinivasa Ramanujan (Dev Patel), a young shipping clerk and self-taught genius, who failed out of college due to his near-obsessive, solitary study of mathematics. Determined to pursue his passion despite rejection and derision from his peers, Ramanujan writes a letter to G. H. Hardy (Jeremy Irons), an eminent British mathematics professor at Trinity College, Cambridge. Hardy recognizes the originality and brilliance of Ramanujan’s raw talent and despite the skepticism of his colleagues, undertakes bringing him to Cambridge so that his theories can be explored.

Ramanujan decides to leaves his family, his community, and his young bride, Janaki (Devika Bhisé), to travel across the world to England. There, he finds understanding and a deep connection with his sophisticated and eccentric mentor and under Hardy’s guidance, Ramanujan’s work evolves in ways that will revolutionize mathematics and transform how scientists explain the world. Ramanujan fights illness and intense homesickness to formally prove his theorems so that his work will finally be seen and believed by a mathematical establishment that is not prepared for his unconventional methods.

[reading from Ramanujan letter]
G.H. Hardy: From an Indian clerk ill-educated in Madras. I would very highly value any advice you give me. Yours truly, S. Ramanujan.
Littlewood: What does the “S” stand for?
G.H. Hardy: You can ask him yourself.
Littlewood: You intend to invite him here?
[Hardy chuckles]

Sir Francis Spring: [to Ramanujan] Letter for you, postmarked England.

Janaki: Don’t forget me.
Srinivasa Ramanujan: I could never.

[as Littlewood  takes Ramanujan through Cambridge]
Littlewood: Don’t be intimidated. Great knowledge comes from the humblest of origins.

G.H. Hardy: For the good of everybody you should attend some lecture.
Srinivasa Ramanujan: But I’m here to publish. The letter only contained a small sampling of my discoveries.
[he passes them his notebook to look through]
Littlewood: This will take a lifetime.
[Ramanujan takes out another notebook from his bag]
Srinivasa Ramanujan: Maybe two.

G.H. Hardy: We need proofs of your work.
Srinivasa Ramanujan: But they are right, sir.

[after Ramanujan completes a mathematical equation on the board in his class]
Fellow: I hadn’t completed that proof. How do you know?
Srinivasa Ramanujan: I just do.
Fellow: You don’t pull a stunt like that in my class. Now get out!

G.H. Hardy: How do you know that theorem?
Srinivasa Ramanujan: It came to me.

Srinivasa Ramanujan: [to Hardy] These steps you want I do not know how to do.

Srinivasa Ramanujan: [to Hardy] Don’t you know what I’ve given up to be here? I have nothing!

Srinivasa Ramanujan: You wanted to know how I get my ideas. God speaks to me.

G.H. Hardy: Why do you do it?
Srinivasa Ramanujan: Because I have to.

G.H. Hardy: There are no proofs that can determine the outcome in matters of the heart.

G.H. Hardy: We are merely explorers of infinity in the pursuit of absolute perfection.