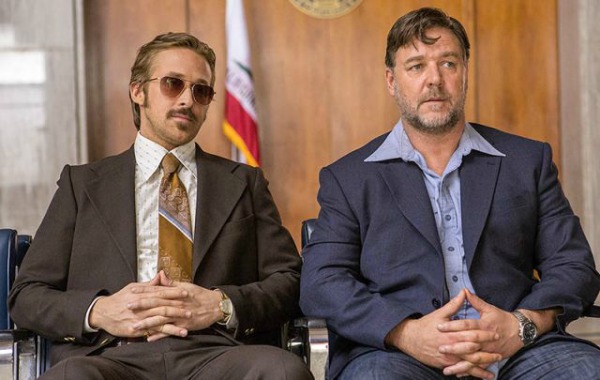 Comedy thriller directed and co-written by Shane Black in which the story is set in Los Angeles in the 1970s and follows a criminal fixer, Jackson Healy (Russell Crowe), who finds himself embroiled in a mystery surrounding a young woman’s disappearance. But it seems the only guy who can help him solve the case is a seemingly incompetent private detective, Holland March (Ryan Gosling), who he had previously roughed up as part of another job.

[as he’s brushing his teeth he looks up the word of the day on his calendar]
Jackson Healy: “Equanimity: The quality of being calm and even-tempered.”

Jackson Healy: [voice over] I’m not in the yellow pages, but if you got trouble with someone you might ask around for me, Jackson Healy.

Judith Kuttner: [to Healy] I work for the Department of Justice, my daughter Amelia is in danger. Please find her, protect her.

[Healy calls to March as he’s sat on the toilet]
Jackson Healy: March, Jack Healy. Don’t get upset, I’m not here to hurt you, I just want to ask you a question.
[he opens his cubicle door and points his gun at Healy]
Holland March: How stupid do you think I am? I got a license to carry, dumb ass! And ever since your little visit this little baby is gonna stay right here.
[he lets go of the cubicle door to tap his pocket with his gun, as the door closes he tries to keep it open but drops the cigarette from his mouth onto himself]
Holland March: Fuck! Fuck!
[March tries to grab the cigarette, fumbles and the stall door closes again, he repeatedly slams it open with his foot, Healy looks quietly amused]
Holland March: Stay right here.

Holland March: Look away.
[Healy turns and sees March through the bathroom mirror]
Jackson Healy: You know there’s a mirror here, right?
Holland March: What do you want?

Holland March: This is a high profile case.
Jackson Healy: It made the newspapers.

Jackson Healy: You’re a private investigator? There’s a couple people that say you’re a good detective. I want you to help me with this case.
Holland March: My profession is very complicated, okay? It’s nuanced.

Holland March: Well, look who decided to show up for class?

Jackson Healy: There’s a couple of people I trust that say you’re good at this. I want you to find Amelia.
Holland March: I would have thought your job ended with breaking my fucking arm.
Holly March: You’re the guy who beat up my dad.
Jackson Healy: Hey.
Holland March: Sucker punched your dad, big difference.

Holland March: What the hell is going on?
Jackson Healy: Oh, yeah, there’s guy coming to kill us. That kind of crap.

[at a late night party]
Holly March: Dad, there’s like whores here and stuff.
Holland March: Sweetheart, how many times have I told you? Don’t say “and stuff”, just say, “Dad, there are whores here.”

Holland March: Where are you going?
Jackson Healy: I think this is going to work better if we split up.
Holland March: Wow, that’s really insensitive.

Judith Kuttner: [to Healy] The mob is trying to spread its operation to Los Angeles. Somehow my daughter Amelia is involved. Please, find her.

Jackson Healy: [voice over] One thing we know for sure, something funny is going on.

[as they watch a guy get shot and then see him as he’s thrown out the building screaming]
Jackson Healy: Oh, this just keeps getting better and better.
[March looks like he’s about to barf]

Jackson Healy: March! Gun! Gun!
[March throws his gun towards Healy but it smashes out through the window instead]
Jackson Healy: Fuck!
Holland March: Shit!

Holland March: [screams] I’m alive!
[just then someone starts shooting at him]

Holland March: [to Healy] Why do you think everyone involved with this case is dying?

Woman: Weapons on the floor.
[the woman points her gun at March]
Holland March: This is not you. You’re not a murderer.
Jackson Healy: She just killed three people.
Holland March: I know, but I’m saying deep down.

Jackson Healy: Look if you come into here, you beat up on me, it’s part of the job, I accept it. But what do you do? You piss me off.

Holland March: Before we go solving the crime of the century let’s deal with the rotting corpse.
Jackson Healy: I got a plan.

Holly March: Promise you’ll get them
Holland March: Yeah, I promise.
[puts up her little finger]
Holly March: Pinky promise?
[March reluctantly links his pinky finger to hers to promise]

Holly March: Dr. Malik, would you like a cookie? I just baked them.
Jessica: There’s none left, remember?
Holly March: No, there is a couple. Doctor?
[John Boy turns and looks around the apartment as Holly goes to the kitchen]
John Boy: I could be persuaded, after I look at Sleeping Beauty.
[as he turns we see Holly retrieve a gun from the cookie jar and point it at him]
John Boy: Oh, nurse Holly.
[he raises his arms and drops his bag]
Jessica: Holly, what are you doing? Are you crazy?
Holly March: There are handcuffs behind the bar, get them.
John Boy: This is really slowing me down, Holly.

[as they are being shot at by John Boy]
Holland March: I think I’m invincible. I don’t think I can die.
[John Boy continues to shoot at them]
Holland March: Let me.
[he steps out of his hiding place with his arms wide open]
Jackson Healy: That’s not the smart idea. March, March, March!

Holland March: I got a cool ad though. I made your head small because I know you’re sensitive how big it is.
[he shows Healy the cutout of the ad showing a drawing of their heads]
Jackson Healy: It’s terrible. Yeah.

Holland March: All right, which one of you cock-and-balls wants to make twenty bucks?

Kid on Bike: You guys want to see my dick?
Holland March: No kid, we don’t want to see your dick.