Zootopia Best Quotes – ‘What do you call a three humped camel?’ 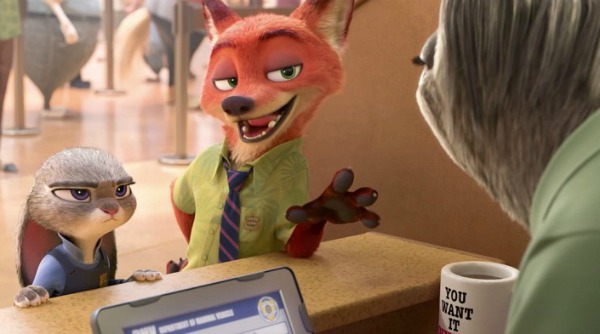 Disney animation directed by Byron Howard and Rich Moore and co-directed by Jared Bush in which the story centers on the modern mammal metropolis of Zootopia which is composed of habitat neighborhoods like ritzy Sahara Square and frigid Tundratown, a melting pot where animals from every environment live together, a place where no matter what you are, you can be anything.

But when optimistic Officer Judy Hopps (Ginnifer Goodwin) arrives, she discovers that being the first bunny on a police force of big, tough animals isn’t so easy. Determined to prove herself, she jumps at the opportunity to crack a case, even if it means partnering with a fast-talking, scam-artist fox, Nick Wilde (Jason Bateman), to solve the mystery.

Stu Hopps: Judy, you ever wonder how your mom and me got to be so darn happy?
Young Judy: Nope.
Stu Hopps: Well, we gave up on our dreams, and we settled. Right, Bon?
Bonnie Hopps: Oh, yes. That’s right, Stu, we settled hard.

Bonnie Hopps: Of course, it is okay to have dreams.
Stu Hopps: Just as long as you don’t believe too much in them.

[addressing his team of cops]
Chief Bogo: Alright! Everybody sit. I’ve got three items on the docket. First, we need to acknowledge the elephant in the room. Francine?
[everyone turns to look at Francine and we see that she actually is an elephant]
Chief Bogo: Happy birthday.
[everyone claps for Francine]
Chief Bogo: Number two, there are some new recruits with us I should introduce…
[we see Judy smiles expectantly]
Chief Bogo: But I’m not going to because I don’t care.
[Judy looks disappointed but laughs it off with the other cops]
Chief Bogo: Finally, we have fourteen missing mammal cases. All predators from a giant polar bear to a tinsy little otter! And City Hall is right up my tail to find ‘em. This is priority number one.

[to his team of cops after announcing that some animals have become savage]
Chief Bogo: This is priority. Hopps, parking duty.
[her colleagues start laughing]
Judy Hopps: Sir, I’m not just some token bunny.

Chief Bogo: You strike out, you resign.
Judy Hopps: Deal.

Nick Wilde: Everyone comes to Zootopia, thinking they could be anything they want. Well, you can’t. You can only be what you are. Sly fox. Dumb bunny.
Judy Hopps: I am not a dumb bunny.
Nick Wilde: Right. And that’s not wet cement.

Judy Hopps: Hello! I’m here to ask you some questions about a case.
Nick Wilde: Then they should have gotten a real cop to solve it.
Judy Hopps: You’re under arrest.
Nick Wilde: For what?
[in patronizing tone]
Nick Wilde: Hwurting ywour fweelings?

Judy Hopps: You are a key witness.
Nick Wilde: No. He is.
[Judy looks to where he’s pointing across the street, there’s no one there, she looks back to find Nick has run off]

Judy Hopps: Uh, I need you to run a plate.
Nick Wilde: Flash is the fastest guy in there, he can run the plate like that.
[he snaps his finger; Nick takes Judy to the DMV building]
Judy Hopps: Wait! They’re all sloths?!
Nick Wilde: Are you saying that because he’s a sloth he can’t be fast?

Judy Hopps: We are in a really big hurry!
Flash: I am on …
[long pause]
Judy Hopps: It?
Flash: Break.
[Judy slams her head on the counter in frustration]

[as Flash is about to type in the last number on the plate]
Nick Wilde: Hey, Flash, want to hear a joke?
Judy Hopps: No!
Flash: Sure.
Nick Wilde: Okay. What do you call a three humped camel?
Flash: I don’t know…
Nick Wilde: Pregnant!
[Nick starts laughing, Flash starts to laugh in slow motion frustrating Judy]
Judy Hopps: Ha-ha! Yes, very funny. Very funny. Can we just please focus on the task?

[as they are finally about to leave the DMV building]
Judy Hopps: Hurry we got to beat the rush hour and…
[she looks out to see it’s night time and everywhere is closed]
Judy Hopps: It’s night!

Judy Hopps: [to Nick] I have thirty-six hours left, we can only solve it together.

Judy Hopps: Oh! You are naked!
Yax: For sure. We’re a naturalist club.

Chief Bogo: [to Judy] It’s not about how badly you want something, it’s about what you are capable of!

Chief Bogo: [to Judy] Life isn’t some cartoon musical where you sing a little song and all your insipid dreams magically come true. So let it go.

Judy Hopps: I came here to make the world a better place, but I think I broke it.
Chief Bogo: Don’t give yourself so much credit, Hopps. The world has always been broken, that’s why we need good cops. Like you.

Judy Hopps: Tomorrow’s another day.
Pronk Oryx-Antlerson: Yeah, but it might be worse!

Judy Hopps: I am a real cop.
Nick Wilde: Never let them see that they get to you.
[as he embraces a weeping Judy]
Nick Wilde: You, bunnies, it’s all emotional.

Mr. Big: We may be evolved, but deep down we are still animals.

Nick Wilde: Well, now, wait a minute. Polar bear fur, Rat Pack music, fancy cup. I know whose car this is, we got to go.
Judy Hopps: Why? Whose car is it?
Nick Wilde: The most feared crime boss in Tranda Town. The call him Mr. Big, and he does not like me. So we got to go!
Judy Hopps: We’re not leaving, this is a crime scene.
Nick Wilde: Well, it’s going to be an even bigger crime scene if Mr. Big finds me here, so we’re leaving, right now!
[as he opens the back of the truck he suddenly sees two giant polar bears waiting for them]
Nick Wilde: Raymond! And is that Kevin? Long time no see. And speaking of no see, how about you forget you saw me, huh? For old times’ sake.
[suddenly Raymond and Kevin grab Nick and Judy by their throats]
Nick Wilde: That’s a no.

[quietly to Nick and Raymond and Kevin are escorting them to see Mr. Big]
Judy Hopps: What did you do to make Mr. Big so mad at you?
Nick Wilde: I, um, I may have sold him a very expensive wool rug that was made from the fur of a skunk, Spot.
Judy Hopps: Oh, sweet cheese and crackers.

[facing a big polar bear after being captures by Mr. Big’s henchmen]
Judy Hopps: Is that Mr. Big?
Nick Wilde: Stop talking. Stop talking!
[a small chair turns and we see Mr. Big is a small weasel and sounds like a chipmunked Godfather]
Judy Hopps: Huh.
Mr. Big: Ice ‘em.
[two of Big’s henchmen pick up Judy and Nick ready to drop them in some ice water, but they are interrupted by Big’s daughter rushing in wearing a wedding dress]
Mr. Big’s Daughter: Daddy? What did we say? No icing anyone at my wedding!
Mr. Big: I have to, baby. Daddy has to.

Judy Hopps: I mean, I am just a dumb bunny, but, we are good at multiplying.

Judy Hopps: When I was a kid, I thought Zootopia was this perfect place. Where everyone got along and anyone could be anything. Turns out, real life’s a little bit more complicated than a slogan on a bumper sticker. Real life is messy. We all have limitations. We all make mistakes. Which means, hey, glass half-full, we all have a lot in common. And the more we try to understand one another, the more exceptional each of us will be. But we have to try. So, no matter what type of animal you are, from the biggest elephant, to our first fox, I implore you, try. Try to make the world a better place. Look inside yourself and recognize that change starts with you. It starts with me. It starts with all of us.

[last lines]
Gazelle: Good evening Zootopia! Come on everybody, put your paws up!