Me Before You Best Quotes – ‘I have become a whole new person because of you.’ 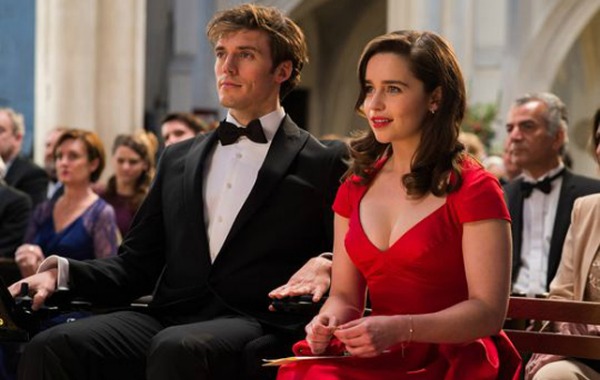 Romantic drama directed by Thea Sharrock, the movie follows Lou Clark (Emilia Clarke), a small town girl with no clear direction in her life she goes from one job to the next and Will Traynor (Sam Claflin), a wealthy young banker who became wheelchair bound in an accident two years prior, and whose whole world changed dramatically in the blink of an eye.

After Lou is hired for six months to be his new caretaker, she becomes determined to show him that life is worth living. Embarking together on a series of adventures, both Lou and Will get more than they bargained for, and find their lives changing in ways neither one could have imagined.

[walking in the city as it’s raining hard talking on the phone]
Will Traynor: Yeah, listen, I’m on it and we can close it.
[he steps out onto the road]
Will Traynor: Taxi! Yeah, and we won’t. don’t worry.
[we see motorcycle on the road honking its horn and it suddenly hits Will]

Lou Clark: What am I hear for?
Nathan: To cheer him up I guess.

Lou Clark: So I thought we could go out this afternoon.
Will Traynor: My mother says you’re chatty.
Lou Clark: Yeah.
Will Traynor: Can we strike a deal whereby you are very unchatty around me.

Lou Clark: He hates me. Every time I speak he looks at me like I’m stupid.
Katrina Clark: To be fair, you are pretty stupid.
Lou Clark: Yeah, but he doesn’t know that yet.

Lou Clark: I just thought I’d see if I could fix some of these.
[she shows him the photo frame she’s fixing]
Lou Clark: Or, um, you know, I you wanted to get new ones I could go into town at lunch time, or we could both go if that sounds…
Will Traynor: Do you know what, Lou? Me smashing those photographs was not an accident.
Lou Clark: Sorry. I didn’t…I didn’t think…
Will Traynor: You thought you knew best. Well I don’t want those pictures staring at me every time I’m stuck in bed waiting for someone to bloody get me out again, okay?
Lou Clark: I wasn’t going to fix the one of, Alicia. Enough of that, that’s just stupid.
[she turns over Alicia’s photo]
Will Traynor: Spare me the cod psychology, just go and rage your grandma’s wardrobe or whatever it is you do when you’re not making tea.
[he starts turning his wheelchair to leave]
Lou Clark: You don’t have to be an ass! Your friend deserved it. I’m just trying to do my job as best I can. So it would be really nice if you didn’t try and make my life as miserable as you apparently make everyone else’s.
Will Traynor: And what if I said I didn’t want you hear?
Lou Clark: I’m not employed by you. I’m employed by your mother, who unless she says she doesn’t want me here anymore I’m staying, not because I care about you or particularly enjoy your company but because I need the money! I really need the money.
[Will looks at her quietly for a moment]
Will Traynor: Just put them in the drawer.

[after she’s finished shaving his face]
Will Traynor: Please don’t tell me you shaved off my eyebrows.
Lou Clark: Only the one.

Patrick: Lou tells me you were an action man before.
Lou Clark: Pat.
Patrick: I bet if we got you on a really good fitness regime…
Lou Clark: Patrick.
Will Traynor: No, it’s fine. Truth is I thought I could crack this and then go back as if nothing had changed. I was wrong.

Will Traynor: [to Lou] Can I take you somewhere?

Camilla Traynor: Will’s barely left the house in two years, we have tried.
Steven Traynor: Yes, but haven’t succeeded. Will needs to be allowed to feel like a man.

Katrina Clark: [to Lou] Use the time he’s got left, show him how good his life can be.

[as they are sat in the car]
Will Traynor: I don’t want to go in yet. I just want to be a man who’s been to a concert with a red dress a few minutes more.

[to Lou after Will’s been taken to the hospital]
Steven Traynor: It’s his fourth bout in two years. The last one nearly killed him.

Will Traynor: I promised my parents six months, and that’s what I’ve given them.
Lou Clark: But that was before me.

Nathan: I want him to live, but only if he wants to live.
Lou Clark: I can’t just let this happen.

Will’s Family Friend: [to Lou] You take care of him, he’s a good one.

Will Traynor: I don’t want you to miss all the things that someone else could give you.
Lou Clark: But I can make you happy.

Lou Clark: I have become a whole new person because of you.

Mary Rawlinson: Bride or groom?
Lou Clark: Neither. You?
Mary Rawlinson: Godmother to the bride, which makes morally responsible for her. Not one of my finer acts.
Lou Clark: Oh, you don’t think much of her then?
[referring to her drink]
Mary Rawlinson: This is a bit depressing. Still one can’t do these things sober.
Lou Clark: Oh, no, wait. There’s alcohol in this stuff?
Mary Rawlinson: Absolutely, darling. And I firmly encourage you to get as drunk as possible. I hear rumors that the father of the bride is going to inflict another speech on us.
[Lou laughs]
Lou Clark: Oh, no, no, no. but I’m supposed to be driving Will home.
Mary Rawlinson: Ah, yes, young Will. He was her chance, you know. If only one of that lot was worth a damn. Terrible shame.
Lou Clark: Well he’s not dead.
Mary Rawlinson: No, I meant for her not him! No, Rupert’s an asshole. You take care of him, he’s a good one. Take it from who knows, four marriages and counting.

[Lou is sat on Will’s lap as they twirl around on dance floor]
Will Traynor: Move closer.
[Lou leans in closer]
Will Traynor: You know you never would have let those breasts so near to me if I wasn’t in a wheelchair.
Lou Clark: Oh, yeah, well, you know you never would have even looking at these breasts if you hadn’t been in a wheelchair.
Will Traynor: What! Of course I would.
Lou Clark: No, you wouldn’t. You wouldn’t. You would have been too busy looking at the leggy blonds, the ones you can smell an expense account at forty paces. And anyway, I would have been over there serving the drinks, one of the invisibles. Am I right?
Will Traynor: Yes, but in my defense I was an ass.
[Lou laughs]
Lou Clark: Yep.
Will Traynor: Do you know something, Clark? You are pretty much the only thing that makes me want to get up in the morning.
Lou Clark: Then let’s go somewhere. Anywhere in the world, just you and me. What do you say? Say yes, Will. Go on.
Will Traynor: Okay.

[going scuba diving]
Lou Clark: I can’t.
Will Traynor: You can, you can do anything.

Will Traynor: I have to tell you something.
Lou Clark: I know. I know about Switzerland, I have known for months. Listen, I know this is not how you would have chosen it, but I can make you happy.
Will Traynor: No.
Lou Clark: What?
Will Traynor: No, Clarke. This could be a good life, but it’s not my life, it’s not even close. You never saw be before. I loved my life. I really loved it. I can’t be the kind of man who just accepts this.
Lou Clark: You’re not giving it a chance, you’re not giving me a chance. I have become a whole new person these last six months because of you.
Will Traynor: I know and thats why I can’t have you tied to me. I don’t want you to miss all the things that someone else can give you. And selfishly I don’t what you to look at me one day and feel event he tiniest bit of regret or pity.
Lou Clark: I would never think that!
Will Traynor: You don’t know that. I can’t watch you wondering around the annex in your crazy dresses. Or see you naked and not be able to… Oh, Clarke if you have any idea what I want to do to you right now. I can’t live like this.
Lou Clark: Please, Will! Please!
Will Traynor: Shh. Listen, this, tonight being with you is the most wonderful thing you could have ever done for me. But I need it to end here. No more pain and exhaustion and waking up every morning already wishing it was over. It’s not going to get better than this. The doctors know it and I know it. When we get back, I’m going to Switzerland so I’m asking you if you feel the things you say you feel. Come with me.
Lou Clark: I thought I was changing your mind!
Will Traynor: Nothing was ever going to change my mind. I promised my parents six months and thats why I have given them.
Lou Clark: No! Don’t say another word. You’re so selfish. I tore my heart out in front of you and all you can say is no. And now you want me to come and watch the worst thing you could possibly imagine. Do you have any idea what you’re asking? I wish I had never taken this stupid job. I wish I had never met you.

Lou Clark: [to Will] I know we can do this. I know it’s not how you would have chosen it, but I know I can make you happy. And all I can say in that you make me, you make me into someone I couldn’t even imagine. You make me happy, even when you’re awful, I would rather be with you, even the you that you seem to think is diminished, than with anyone else in the world.

[Last lines]
Will Traynor: [voice over] Clark, a few weeks should have passed by the time you read this. If you follow the instructions, you’ll be in Paris on one of those chairs that never sit quite level on a pavement. I hope it’s still sunny. Across the bridge to your right, you’ll see L’artisan Parfumeur. You should try the scent called Papiomextrem. I always did think it would smell great on you. There are few things I wanted to say and couldn’t because you would’ve gotten emotional and you wouldn’t have let me finish. So, here it is. When you get back home, Michael Lawler will give you access to a bank account that contains enough to give you a new beginning. Don’t start panicking. It’s not enough for you to sit around for the rest of your life but it should buy you your freedom, at least from that little town we both call home. Live boldly, Clark. Push yourself. Don’t settle. Wear those stripy legs with pride. Knowing you still have possibilities is a luxury, knowing I might have given them to you. This eased something for me. So, this is it. You are scored on my heart, Clark. You have been the first day you walked in with your sweet smile and your ridiculous clothes and your bad jokes and your complete inability to ever hide a single thing you felt. Don’t think of me too often. I don’t want you getting sad. Just live well. Just live. I’ll be walking beside you every step of the way. Love, Will.