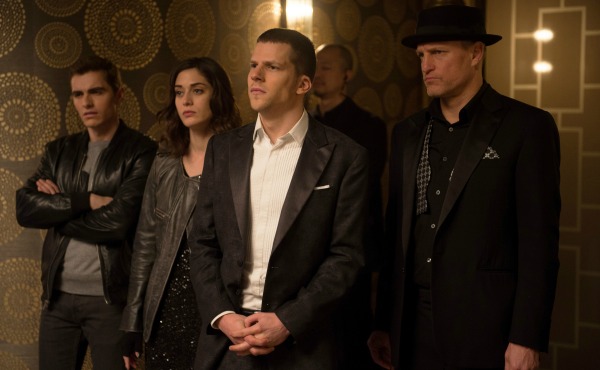 Heist comedy sequel directed by Jon M. Chu in which The Four Horsemen (Jesse Eisenberg, Woody Harrelson, Dave Franco, Lizzy Caplan) return for a second mind-bending adventure, elevating the limits of stage illusion to new heights and taking them around the globe. One year after outwitting the FBI and winning the public’s adulation with their Robin Hood-style magic spectacles, the illusionists resurface for a comeback performance in hopes of exposing the unethical practices of a tech magnate. The man behind their vanishing act is none other than Walter Mabry (Daniel Radcliffe), a tech prodigy who threatens the Horsemen into pulling off their most impossible heist yet. Their only hope is to perform one last unprecedented stunt to clear their names and reveal the mastermind behind it all.

Jack Wilder: Let the moments and let the car do all the work for you. It’s all in the wrist.
[he throws a card onto the back of the car]
Merritt McKinney: Not bad. Now do you want to see a thing of beauty?
[he throws the card]
Merritt McKinney: Bingo, bango, bongo.
[the card doesn’t land on the car]
Jack Wilder: That’s good. It’s good to be positive despite making zero progress in a year.

Lula: And what about girls, like relationships?
Jack Wilder: Ah…
Lula: What?
Jack Wilder: Look it’s not something I’m proud of but every girl I get close to I end up taking their trust, and then their wallet.
Lula: You, uh, you take their wallets?
Jack Wilder: Yeah.
[she holds up his wallet in her hand then drops it on the floor]
Lula: Did you ever take their belts?
[she takes his belt out of her pocket and drops it also]
Lula: Oh, I’m sorry, did you think that I was like those other girls? Oh, Jack.
[she then stand, turns and walks off]

Thaddeus Bradley: People see the Horsemen as noble Robin Hoods, but I believe their first attack was just a set up for an even bigger reveal. If you think you’ve seen it all take another look.

Merritt McKinney: It’s so great to be back.

Arthur Tressler: It’s so nice to see you all again.

Thaddeus Bradley: Are you listening, Horsemen, you will get what’s coming to you in ways you can’t expect.

J. Daniel Atlas: I’ve been told that I have some control issues, so I’m going to control something that’s a lot easier than people.
[pointing to the rain]
J. Daniel Atlas: Stop!

Voice: Now the greatest magicians in the world are my magic trick.

Dylan Rhodes: Everyone, get off the stage.

Merritt McKinney: We jumped off a rooftop in New York. We ran into China.
J. Daniel Atlas: How is this possible?

Merritt McKinney: Have I ever told you about the guy who screwed me over everything? This is my twin brother Chase.

Thaddeus Bradley: [to Rhodes] This is simply my move. Next one is yours.

Thaddeus Bradley: Yes, you were lured into a trap, and the only way out is through.

Lula: Somebody got the better of us, okay? Somehow.

Walter Mabry: So happy to be working with you. Ta-dah!

Walter Mabry: You’re magicians and thieves and we need your skills.

Walter Mabry: This is the key to every computer system on the planet. I want you to steal it for me.

Arthur Tressler: Hell will look like a day at the spa once I’m through with the Four Horsemen.
Walter Mabry: You had me at “Hell.”

Dylan Rhodes: You think we’re still going to play your little game.
Thaddeus Bradley: I know you will.

J. Daniel Atlas: We’re going out with the show people will never forget.

Jack Wilder: Not long ago we were tricked.
Lula: So it’s only fitting that we do the same thing to the person who did it to us.

Jack Wilder: Damn, it feels good to be back.

Thaddeus Bradley: There’s always more than what’s on the surface.

Dylan Rhodes: Want to know what all this has been leading to?
Thaddeus Bradley: The greatest magic trick ever created.