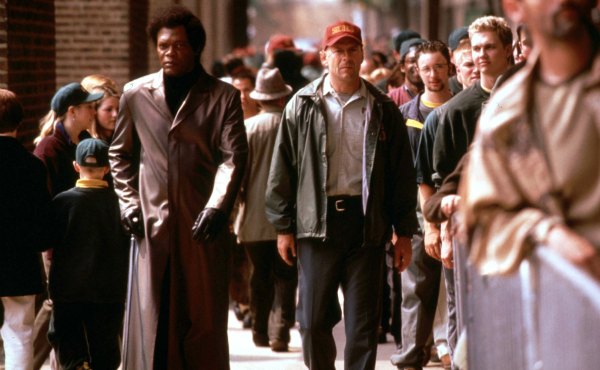 Unbreakable is written, produced and directed by M. Night Shyamalan and stars Bruce Willis and Samuel L. Jackson. It also stars Robin Wright, Spencer Treat Clarke and Charlayne Woodard. It is a film about a man who survives a massive train accident only to discover that he emerged completely unharmed – more accurately, he emerged without one single scratch on his body. He is then contacted by Samuel L. Jackson, who plays a man that suffers from a very real disease called Type 1 Osteogenesis Imperfecta and is convinced that David has special abilities, that of a superhero from a comic book. This film came out in the year 2000, after most superhero films crashed and burned – Superman had been derailed by the dreadful Superman IV: The Quest for Peace, and Batman had been ruined by Batman and Robin. This year, the X-Men was also revived superbly by Bryan Singer. However, this stands above the rest because it is extremely special in terms of being a superhero film.

Unbreakable is one of M. Night Shyamalan’s earlier films, and when it was released the reception was rather mixed – that is mainly because of the misleading advertising made before it came out, advertising it as a supernatural thriller instead of a superhero film, the latter of which was what Shyamalan intended. This came out after probably his best film, The Sixth Sense, and it’s hard to not go south after releasing such a successful movie as The Sixth Sense. In my opinion, Unbreakable is one of Shyamalan’s best films to date. You can almost tell that he really went for it in making this movie, based on the amount of references and allusions to comic book mythology and superhero fiction that he incorporated into the film’s themes and surroundings. Quentin Tarantino himself, the man behind gems like Django Unchained and Pulp Fiction, suggested that it should have been marketed with the line ‘What if Superman was living on Earth, and he didn’t know he was Superman’.

Bruce Willis gives quite possibly his best performance alongside John McClane in Die Hard in this movie – I’m not exaggerating, he is magnificent in this movie. He does what Shyamalan is best known for – giving a subtle performance throughout this movie, being a very grounded, subdued and realistic character that you can get behind. Robin Wright, who plays his wife Audrey, also gives an excellent performance, as does Spencer Treat Clarke (One of the best child performances of the decade until Emma Watson as Hermione Granger or Georgie Henley as Lucy Pevensie). Willis’s character, David Dunn, is basically your average guy in this movie, but he does face his own share of problems – his marriage with Audrey isn’t going perfectly, he’s afraid that he isn’t being the best father to his son, and he is most importantly worried that he isn’t doing what he is meant to do, which I’ll go into later on. This provides a very sympathetic character for this movie, and most of that is down to Shyamalan’s script and Willis’s exceptional talent.

Probably the best performance in this entire movie, alongside Bruce Willis as David, is undoubtedly Samuel L. Jackson as Elijah Price. Dear God above, Samuel L. Jackson was freaking brilliant in this movie. He suffers from a very real situation and a very real disease, and his character had a lot of complicated things about his life. He’s suffered from Osteogenesis Imperfecta since the day he was born, and he was bullied as a child – kids called him Mr. Glass because he broke so easily (That’s freaking cold!). When we see him as an adult, he is this very subdued, but extremely mysterious man with an obsession that has overcome him in so many ways. Jackson’s performance in this movie is the definition of heartbreaking – you can’t help but feel for this man, as more facets of his character are revealed across the movie. Strangely enough, you do the same thing with David Dunn’s character, which suggests that Shyamalan also wrote it to be a character piece for both Willis and Jackson’s characters, since the entire story revolves around them and the other people seem like background characters in comparison.

The pacing of this film is perfect: It’s extremely slow, so that you don’t just immediately find things out when they’re relevant: Shyamalan incorporates them so that you more or less learn them and have to keep them all in mind when they become relevant later on. For example, the scene where we learn that a child once drowned in the pool where Spencer Treat Clarke’s character goes, and it is gradually revealed to have been David – this is then gradually revealed to be David’s weakness, considering that he cannot swim. Building on that, Spencer Treat Clarke’s best scene by far is when he thinks that Elijah is right and tries to shoot his father, thinking that the bullet will just bounce off him. This scene is well acted, it’s all one long take and the script is excellent. It gives the sense as to how complex David’s family is. That’s what I like a lot about this movie that doesn’t get enough credit, the wide, long takes that let you see that the actors are actually acting and lets you absorb the gravity of the situation.

One of my favourite elements of Unbreakable are the superhero/comic-book references that appear throughout it. For example, the relationship between David and Elijah, where David’s vocabulary is very basic and grounded, and Elijah speaks very intelligently and with sophistication, much like a hero and villain respectively do in comic books. Also, there’s the colour scheme for both characters – David’s is green, since most of his clothes and surroundings are green; Elijah’s is purple, and most of his clothing and surroundings are purple. This reflects another trend in comic books where characters have their own colours (Batman has black and blue, Spider-Man has red and blue, the Incredible Hulk has green, and so on)

James Newton Howard’s score is breathtaking in Unbreakable – James Newton Howard has also done the 2003 Peter Pan, The Water Horse, The Hunger Games: Mockingjay and, most recently, Fantastic Beasts and Where to Find Them, so clearly the man knows his stuff. His score dominates every single scene in which it is included, especially the scenes where you are supposed to feel afraid for the characters, most notably the big finale at the end of the movie. In fact, I’d go so far as to say that this movie makes James Newton Howard my favourite film composer of all time, only surpassed by John Williams for his work with Indiana Jones, Jaws and Star Wars. At the finale of this movie, Howard’s score builds so perfectly that, when things finally go down, it takes you off the edge of your seat, and that’s one of the best things that a musical score can do in a movie.

The scene where David finally embraces his powers, using his extrasensory abilities to track several people who have done terrible things – he finally zeroes in on the Orange Man, who has attacked a house, killed the parents and is keeping the children captive. When David ventures to the house where the Orange Man is hiding, and the man pushes him into that swimming pool, Howard’s score piques dramatically because this is David’s weakness – water, and when the children he’s freed pull him out of the pool, there’s this really good shot of him climbing out and towering over the children, who just stand there, catatonic, which I can imagine happening in a real situation because these kids were just attacked by a stranger that just killed their parents, and another complete stranger just saved them from the Orange Man.

Then we cut to the amazing scene where David sneaks up on the Orange Man and they have this really intense struggle, during which Howard’s score just overflows with sheer awesomeness. See, at the beginning of this scene, the Orange Man was a big, strong scary man – now he’s terrified and realises he’s about to die at the hands of this bigger, stronger, invulnerable man. This entire fight scene feels like David is just screaming in his mind ‘I’m back! You son of a bitch, you’re going down!’ What is also impressive is that the fight is filmed in one, long take, which follows these guys all the way across the room as David overpowers his opponent, and we finally get to see just how invulnerable he is – I mean, seriously, during the fight David is slammed into a wall so hard that it cracks, and he keeps fighting – and the stunt work for the struggle is excellent.

The ending of Unbreakable is the source of displeasure for many critics who observe this film. See, when David defeats the Orange Man and he has this really well-paced reconciliation scene with his wife and child, and you can just tell that he finally feels fulfilled, which Elijah brings up later on when asking if David woke up and felt that familiar sadness, which David doesn’t because he just saved someone and it’s what he’s meant to do. Then we see the exhibition at Elijah’s store and we meet his mother, who was played perfectly by Charlayne Woodard, and she remarks on how there are two types of villains in comic books – the soldier villain who fights the hero with his fists, and the dangerous and brilliant archenemy who fights the hero with his mind. Like I said, this film lets us learn things so that they are relevant in unexpected ways later on. Then, when Elijah and David meet for the final time and we realise that Elijah was behind the train crash at the start of this film, along with other incidents that have killed so many people.

This is what people get mixed up about Unbreakable – the big twist ending that M. Night Shyamalan is famous for in his films. The big reveal that Elijah Price is the main antagonist of the film is actually one of my favourite movie endings in a film, and that isn’t just because it’s surprising and it’s groundbreaking for what this film was trying to achieve, but because it makes sense. Elijah has grown up obsessed with the concept that there is someone else at the other end of his spectrum, someone who cannot be hurt. Elijah then gives this truly heartbreaking speech where he says ‘Do you know what the scariest thing is? To not know your place in this world. To not know why you’re here. That’s…just an awful feeling’. We learn so much about Elijah’s character in this scene, and, to be honest, I sympathise completely with him – he’s lived a hard, broken life and he’s feared losing his grip on reality. More accurately, he’s afraid that he’s had no purpose in life, and learning about David’s powers and proving himself right gives him a sense of purpose. This sense of purpose is to be David’s antithesis, since in comic books the hero and villains are usually precise opposites of one another and are sometimes friends, like David and Elijah.

That’s what makes this ending so important, and Samuel L. Jackson is truly amazing in it, as is Bruce Willis. Jackson’s last line, and the most tragic line in the entire movie, is when he says ‘They called me Mr. Glass’, and we realise that this man isn’t evil – he’s broken.

Unbreakable is one of the most underrated films I’ve ever seen, and I think that it deserves recognition for what it was trying to achieve. It was a great movie, a great superhero movie, and a great character piece between Bruce Willis and Samuel L. Jackson. If you haven’t seen Unbreakable, I truly recommend seeing it because it’s a brilliant movie.